2Dark is horror set in the recesses of human depravity 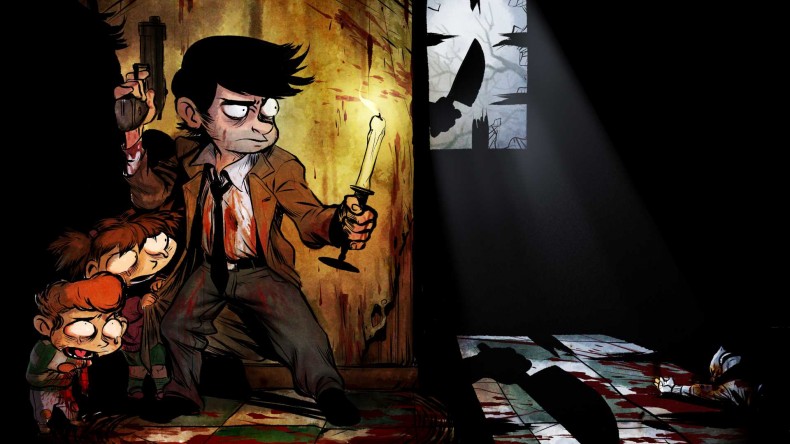 2Dark is a top-down, stealth and survival horror game. If you ignore the duff name, it isn’t too shabby. The horror elements are clichéd in parts (cue the singing children), but it’s pretty terrifying and grotesque. You play as a former detective called Mr Smith – many years after a tragic event: what seemed like a peaceful retreat for Mr Smith and his family ended in the worst possible way, with the family camping trip gone sour. And by sour, I mean your wife gets decapitated and your kids get stolen, so yeah, pretty grim right from the offset.

It’s tragic, bloody, challenging, and pure evil. It comes from the mind of Frédérick Raynal: one of the pioneers of survival horror, and creator of Alone in the Dark. He has no issue with tackling the darkest of subjects such as child abduction and serial killers, doing so in such a blunt, awful way; throw in a spattering of horror tropes and moments of pure dread, and that’s 2Dark in a nutshell. One of the first instances I realised how horrendous 2Dark was, was when you try and lead a small group of children out of an abandoned circus/amusement park only to watch a duo of lions rip the limbs from their adolescent bodies. No-one is spared, and there is no time to rest easy – it’s relentless. Enemies never stop coming for you once they see you, and if you’re low on ammo you’re probably going to die a lot.

Before starting the main levels, you wander around your house and collect a torch, a gun, and the means to power and use both, before heading off on a hunt to murder serial killers and find your own children. The aim of the game is to find some spooky kids and lead them away from whatever horrors they’ve witnessed, and save them from the killers and degenerative weirdos trying to butcher and mutilate you. Gloomywood is a dreamscape soaked in fear and death. Whilst it’s wonderfully designed, there’s something so unnerving about the darkness and what may be hiding within. As previously mentioned, you have a torch to help light up the night, but it requires batteries; if you run out of batteries there’s no way to illuminate the path in front of you, other than a lighter, but that doesn’t do much good if you’ve found yourself in pitch black that fills the entire screen.

You have an item bar at the side of the screen, and as you collect various bits and pieces it’ll fill up. Combining certain items will allow you to do certain things, such as combining cigarettes and a lighter. This is also a way to save the game, but do it too much and you’ll cough profusely, attracting any unwanted attention for whatever may be lurking around the corner.

Mr Smith finds solace saving the children you come across, but it’s no easy task. Sometimes they can wander off and lead into the path of a killer. They can cry, cause a fuss, and generally act like a kid, so finding a way to pacify them could literally be a case of life and death. Thankfully, you can use candy as a way to guide them and keep them quiet; I also used candy for something else, and even though I don’t want to ruin it for you, always bare it in mind – it will help you out elsewhere. After playing 2Dark, I’m not really sure what to think. I only got to play a demo of the game featuring a couple of levels, but there’s something about it that I can’t quite get on board with. I’m not put off by the disgusting horror or psychological torment the story oozes, but more so by the difficulty. You are given a brief tutorial, but beyond that, it’s you on your own (well, apart from the creepy children). There is no clear location for new bullets for your Smith and Weston, and batteries to power your torch are hard to come by.

I didn’t know I could break open one of the wooden caskets until I chanced it with my crowbar, and everything creates sound. Whether it’s a cough or communicating with the children, sound travels into the ears of the enemy. Items are scarce, and it can be really tough to take down certain psychopaths, too. Although there’s a sharp difficulty peak, 2Dark has plenty of promise; at the helm is one of the masters of videogame horror, and the voxel art style does enough to grip as much as it does scare the living shit out of you.

Video games are cool. Don't let anybody tell you any different.
MORE LIKE THIS
2Dark