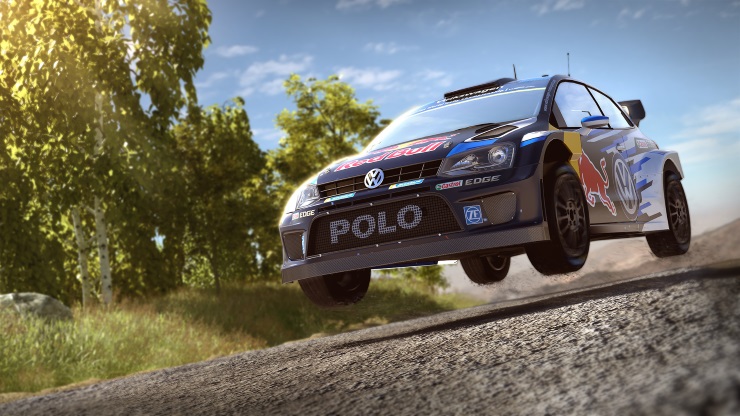 WRC 5 is my favourite racing game of 2015. Given that this year has also seen the excellent Project CARS, that statement probably surprises you as much as it would have done for me just a couple of weeks ago.

The official game of the 2015 WRC championship, WRC 5 is a rallying sim. Please, please, please don’t be put off by the s-word though, as in rallying it is a completely different experience. In a track-based sim, to win you need to clip apexes perfectly, lap after lap, shaving precious tenths off the car ahead, waiting, planning your move until you have the perfect opportunity.

Not in a rally game. On the contrary, WRC 5 almost feels arcadey; going sideways round corners, clipping bumps and fences. But it isn’t. You still have all the tweaks and settings under the bonnet, changing gear ratios and setups to match the course conditions – even if it can be automated. The truth is, rally naturally makes for a fun simulator. With no competitors on track at the same time, stages become battles between you and the course. You cane it through forests and over mountain passes inches away from a collision, taking corners as tight as you dare, all to shave off valuable fractions of a second. You only ever think a corner or two ahead – forewarned by your excellent co-driver – working out how to get the best line between them as you go. It could be the most exhilarating racing on current consoles.

Then there’re the different rallies. With 13 on the calendar, they range from muddy Wales through to snowy Finland and sun-baked Mexico. The handling model is excellent, with the different surfaces all feeling subtly different, and while you’ll adapt on a stage by stage basis, the change when you run onto some mud after being on tarmac mid-stage can throw you off for just a second.

If that second does cause you to crash horribly, there is a rewind feature. Unlike in Codemasters’ titles, this resets you at a mid-stage checkpoint, starting you from standing. This means it should only be used when you make a massive mistake, rather than to find half a second through a corner complex. Every little helps when it comes to time though, as the times for each stage of a rally are added up, with the lowest cumulative being the winner. It does mean that if you massively cock-up one stage you can redeem yourself, though larger deficits are hard to claw back.

Mode-wise there are a few to choose from. Quick stage and quick rally are as they sound, as are the multiplayer components, which allow you to tackle a rally against human players, either online or locally (though the latter is on a turn by turn basis). There’re also community challenges to partake in, and a rally school to teach you the ropes.

The real meat lies in the career mode, which has you sign on as a Junior WRC driver and work your way up through WRC 2 to the real thing proper. It’s incredibly cool, with contracts coming with different requirements on the balance between out-and-out pace and keeping the car in one piece. Promise to look after it and heavy damage will demoralise your co-driver and mechanics, meaning they take longer to fix your car. You only get 45 minutes to fix any damage from the previous days stages, meaning on days with three stages it can be a worthwhile tactic taking it easy on the first so that you have more grunt to give later, as damage really effects how the car behaves. The only real downside to WRC is the aesthetic. While pretty enough, other racers have shown that graphics can be done a lot better. Worst is the damage modelling, with bits falling off your car showing an ugly black model underneath. Even crumpled sections don’t look that realistic, and it highlights the dev’s lack of resources. The timings appear to be a little shonky too, capable of challenging you most of the time, but awful at night stages, frequently several seconds behind me at best. In part this may be overcompensation by the developer, as night stages don’t really affect you too much; what with you only able to see a little bit ahead at the best of times, and your headlights and co-driver’s instructions guiding you the rest of the way.

It’s a shame that these points take the shine off an otherwise excellent game, but while it might not have the looks of a Ferrari or an Aston Martin, given it’s a sport that fans will stand in a muddy field in the pouring rain to watch, maybe that’s not the biggest deal-breaker. WRC 5 really is the most fun I’ve had with a racer this year, giving you a phenomenal handling model, sticking you on a course and largely leaving you to attack it. What more could you want?

WRC 5 really is the most fun I’ve had with a racer this year, giving you a phenomenal handling model, sticking you on a course and largely leaving you to attack it. What more could you want?