Today, Ubisoft announced the development of Assassin’s Creed: Revelations, the fourth installment in the critically acclaimed and immensely popular video game franchise. Developed and led by Ubisoft Montreal with the support and expertise of Ubisoft studios Annecy, Massive Entertainment, Quebec, Singapore and Bucharest, Assassin’s Creed: Revelations presents the most immersive experience available in the series to date and the culmination of Ezio’s adventure.

Initially launched in 2007, the first three Assassin’s Creed games have sold more than 28 million units worldwide, and the franchise is now established as one of the best-selling series on next generation consoles.

Are you ready to delve back into the world of intrigue and murder with our old friend Ezio Auditore on last time?

Recognized for having some of the richest, most engrossing storytelling in the industry, Assassin’s Creed has transcended video games, branching out into other entertainment experiences such as comic books, Facebook, novels, short films and more. 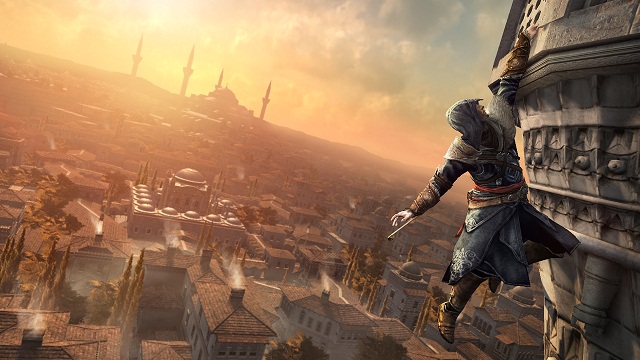 In Assassin’s Creed: Revelations, master assassin Ezio Auditore walks in the footsteps of his legendary mentor, Altaïr, on a journey of discovery and revelation. It is a perilous path – one that will take Ezio to Constantinople, the heart of the Ottoman Empire, where a growing army of Templars threatens to destabilize the region.

In addition to Ezio’s award-winning story, the acclaimed online multiplayer experience returns, refined and expanded, with more modes, more maps and more characters that allow players to test their assassin skills against others from around the world. The latest chapter in the Assassin’s Creed saga also includes revolutionary gameplay, allowing players to manipulate the construct of Desmond’s memories and the Animus to decipher the mysteries of his past and gain insight into the future.

“Delivering the final chapter of the Ezio trilogy is an important milestone in the Assassin’s Creed franchise for us and for our fans,” said Alexandre Amancio, Creative Director at Ubisoft Montreal. “Assassin’s Creed: Revelations includes lots of new features and some significant surprises. We can’t wait to show our fans what we have in store at E3 this year.”

Assassin’s Creed: Revelations is set to release for the Xbox 360, PlayStation3 and PC this November.