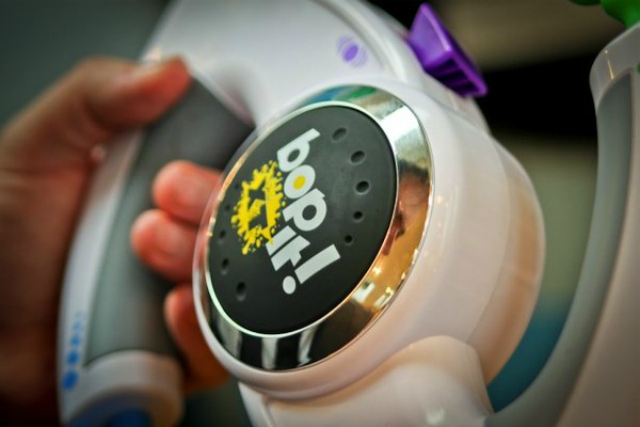 If you were anything like me when you were growing up, then you had a tendency to ask for anything that made loud noises for your birthday and/or Christmas. For me, one of these things were the Bop It! series of games, a selection which, in a similar fashion to the classic Simon Says games, would shout at the player to perform certain tasks in order to win the game. I never did manage to get my hands on one during my younger years, but now that I’m an adult – at least on the outside – I can get whatever I want and justify it any way I see fit, and so, with the long-admired Bop It! in my hands (this time the XT version) I decided to see what all the fuss what about, and whether or not it warranted all that attention from me all those years ago.

For those of you unfamiliar with Bop It! in its many incarnations, the main gameplay element involves the player performing certain tasks when they’re told to do so. There are five main actions on the device, “Spin It”, “Flick It”, “Twist It”, “Pull It” and the titular “Bop It”, and at various points throughout whichever mode you happen to be playing, you’ll be asked to perform one of these actions. You only have a couple of seconds to do so though, and failure to comply in a timely manner will result in game over, much to your inevitable dismay. This gameplay mechanic alone is rather addictive as you’ll often find yourself just having “one more go” as you’re adamant you can do just that little bit better or beat that high score, but it’s not as easy as it sounds – which, of course, is the obvious draw of the game in the first place. Bop It! XT isn’t just a game to play alone either, and there are plenty of game modes on offer to allow people to play together with just a single device. “Solo” play does exactly what it says on the tin, allowing you to play on your own; “Pass” tasks each player with doing as they’re told – as in solo play – but you must pass it to the person on your left or right (something which needs to be decided before the game starts) when the device tells you to. “Party” is the same as “Pass”, only you must perform certain actions only with the stipulated body part. Failure to do so will result in you being out of the game, although it’s your fellow players’ responsibility to judge this; there’s obviously no way the game can tell if the player hit Bop It! with the correct body part.

One of the best game modes, at least in my opinion, is the One-On-One mode. In this, two players first decide whether they’re going to be Yellow or Green, with the Green player taking control of “Flick It” and “Spin It” and the Yellow player taking control of “Twist It” and “Pull It”. Both players have access to the “Bop It” button but they must press the correct one based on their team colour (the ‘XT’ logo on the buttons on either side of the device will be different to denote this if you’re holding the Bop It! XT correctly), which is always the button on their right. This mode quickly descends into a game of “who can slap the big button first” and will cause more laughs than most people would have expected from a game aimed so squarely at the younger generation.

VERDICT: Bop It! XT was one of those games that I just happened to miss playing while I was growing up, and it’s something that’s clearly aimed at kids, but that didn’t mean I wasn’t able to enjoy it even now. The pleasure of beating your own high score is as relevant now as it ever was – and probably will ever be – and the multiple games modes, especially the One-on-One mode, give the device an extended life that it wouldn’t have otherwise. I can’t see myself getting Bop It! XT out at parties, probably just keeping it to solo play and the aforementioned One-On-One between my wife and I, but I will keep going back to it and attempting to beat my score. Also, the headphone socket on the underside of the device is a godsend – just ask my wife.

Unless I run out of money, then we might have a problem.
MORE LIKE THIS
Bop It!hasbro