CoD Dog Gets a Name – Controllable Via Voice Command 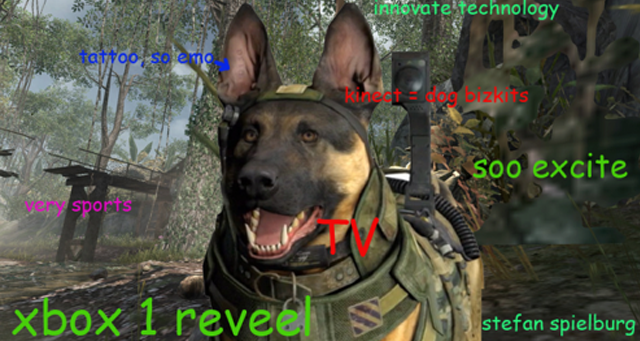 Call of Duty: Ghosts’ biggest running joke now has a name, the dog, named Riley, will be able to take orders from players via use of the headset of whichever system you happen to be playing the game on. Don’t have a real dog? Consider this a training exercise. A rather dramatic one..

The news was announced by Infinity Ward exec’ producer Mark Rubin during a recent livestream event for Polygon. Rubin was apparently ‘blown away’ by the response to Riley, and said that the team was working hard to make the German Shepherd a main character. Riley wears a flip up camera in his vest that players can look through, and the commands demonstrated in the livestream included “takedown” and “distraction”, amongst others.

So, are you a CoD fan that loves dogs? Let us know in the comments section below. Or, send a crayon picture of your favourite dog to us, maybe draw the dog in a cape. Dogs in capes are awesome. Yeah! GO SUPER DOG!

Hello! I'm Jonny, gamer since 94' thanks to my trusty Super Nintendo, hooked ever since. Consider myself to be a casual gamer, but to be honest I'm just kidding myself. Nintendo fan boy, Formula 1 and Saints FC fan.
MORE LIKE THIS
Call of Duty: GhostsInfinity Ward

Onslaught DLC For COD: Ghosts Gets A New Narrative Trailer