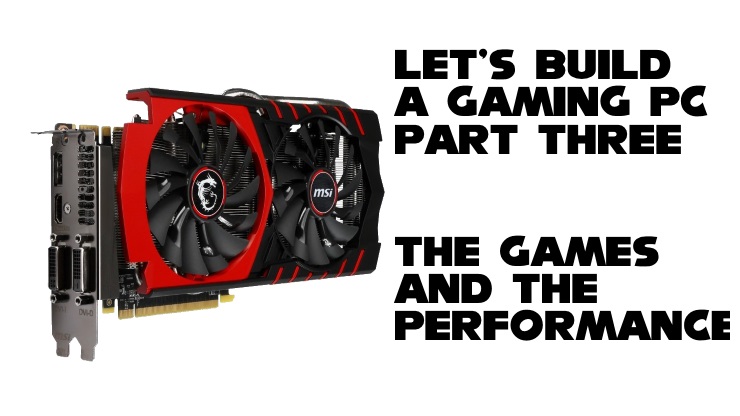 After building “the beast”, it’s time to test it with some games, some intensive software, and just general usage. Will we fall in love?

Read part one (the parts) and part two (the build). What does this actually tell us, though?

Well, comparing to other people who have decent gaming rigs, it tells me I need to do some tweaking. I spoke to Colm about his home gaming PC, and my score easily beat his. But I’d expect as much, purely down to the GPU and amount of RAM we’re running here. Calvin, on the other hand, slightly outranked the beast, which he perhaps should as we’re running a very similar setup. However, with the fact this is a completely fresh install, we should possibly just about outrank him.

So, in terms of actually playing games, the target was to hit 1080/60 without breaking a sweat. We’ve played lots of games in the past few weeks, and we can happily say that we’ve done that comfortably. Only two games showed a single notable frame-drop: The Vanishing of Ethan Carter (a notoriously intensive visual feast), and Far Cry 4, which had a few stutters (rarely dropped below 45-50, but did drop twice) but generally held up well.

In the video below, you can see the four games we have been playing on this new PC. Elsewhere, Mike Stubbs is testing a Chillblast PC, which is a similar rig but is (obviously) built for you. Obviously there are benefits to both systems, but knowing we’ve built this ourselves, and thus knowing exactly what is going on… well, it’s largely up to the individual, but this one feels like our baby, and we’re very happy with it. The video below shows the games in action.

Editor-in-Chief.
MORE LIKE THIS
eBuyerFar Cry 4Hand of FateLife is Strange

Building a Gaming PC for a Grand: Week One – The Parts