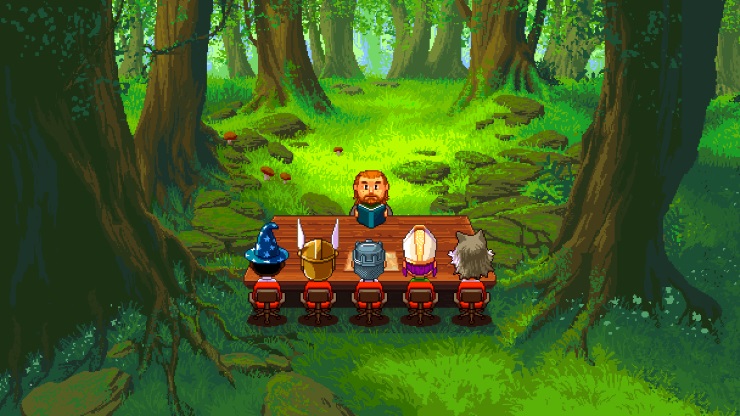 I began playing Knights of Pen and Paper 2 not knowing what to expect at all, having not played the original or even thought about participating in the table-top RPGs it so charmingly pokes fun at. What greeted me was a rather unusual concept: you play as a group of friends taking part in a pen-and-paper RPG, not unlike Dungeons and Dragons. The table in which they are playing on is constantly on-screen: five friends, all different races and classes on one side, and the Dungeon Master, ruler and narrator of the game on the other. The only thing that changes about the setting is the backdrop, ever flitting through an array of pixel-art backdrops that burst with imagination and do a swell job at replicating the settings found within the genre.

Your job is to complete the multitude of quests put to you by the Dungeon Master, who is your guide through the 16-bit fantasy world. There is plenty of witty humour and tongue-in-cheek jabs at the RPG genre between the players, Dungeon Master, and the inhabitants of the world you explore – sort of an inside joke between the creators and the gaming community. It’s simple enough to control, with mechanics such as crafting and the shop being introduced gradually as you level up and add more players to your table. As in real-life, the dice has the power to make or break. Virtually everything is decided by a roll, from the chance of enemy encounters while traveling to whether one of your characters will be stunned or burned in combat. It’s an interesting idea, and one that puts a lot of faith in sheer luck, but ultimately keeps the game balanced and feeling fair in every aspect. The inclusion of the dice, instead of keeping decisions and chance events in plain black and white, helps to add that sense of RPG simulation while keeping you on your toes in case a roll doesn’t go your way.

Reminiscent of 90s 16-bit era, Knights of Pen & Paper 2 brings the geeky back with a bang. I’ve never felt so nerdy in all my life picking up on all the little nods and inside jokes put in for the pleasure of long-time gamers – a grapple attack resulted in the phrase “Get over here!” is uttered – a gesture of appreciation towards the iconic saying from Mortal Kombat. The turn-based combat feels fresh and allows you to utilise the range of skills you have at your disposal, with each party member quite literally bringing something new to the table thanks to the ability to fully customise each addition. Character creation is split into three categories: background, race, and class. Background entails titles such as Rich Kid; Goth; Rocker; Cheerleader, while race can be either Dwarf, Human, or Elf. Class is the usual RPG namesakes: Warriors; Mage; Cleric. Each trait and subsequent combination of traits has their own merits, allowing you to create party members each with a unique set of skills. It’s a lot of fun mucking around with the different classes – a personal favourite being the dwarf cheerleader, a tiny yet heavily-bearded dwarf kitted out in a bralet, miniskirt and pom poms. Priceless.

A game should keep you enticed, wanting to play more, and there’s been an unfortunate shortage of those at the moment. Knights of Pen and Paper 2 has changed that for me entirely. Coming to the end of the preview, I was left sad, plain and simple. The fact it has offered an utterly unique and entertaining experience to me (a complete D&D virgin) just goes to show the appeal of this game. Its potential audience is vast, not limiting itself to those who are experienced in the genre but instead broadening its horizons by softening the often daunting atmosphere found in RPG titles. This second game essentially builds upon its predecessor, improving on its imperfections, honing its mechanics, and ultimately paving the way for another stellar title.

Preview code provided by publisher.
Liked it? Take a second to support GodisaGeek.com on Patreon!

Currently an English, Journalism and Creative Writing student at the University of Strathclyde. Based in Glasgow, I spend most of my free time playing video games ranging from Japanese visual novels to horror games. You can contact me at greg@godsiageek.com!
MORE LIKE THIS
Knights of Pen & Paper 2