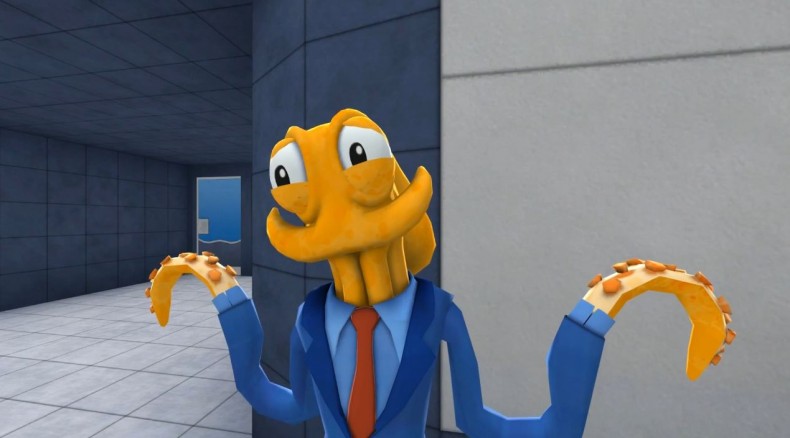 Via Sickhead Games and Young Horses, Octodad: Dadliest Catch is coming to PS Vita on May 26th.

We reviewed it back in February 2014, where Colm found himself “uncontrollably chuckling at the sight of an octopus getting dressed up for his wedding”. Yep, that’s a thing that happens in this game.

It won’t have cross-save, however, so you’ll have to start the game again if you’ve played it before. But it will have a new set of trophies, and it will be cross-buy, so if you own it on PS4 already, you can get the Vita version for free.

Another cool feature is the ability to play co-op locally using one device. With Sickhead Games’ help, we managed to stuff in enough control for two players (one on each side) to wobble your favorite dad through everyday life while rubbing shoulders with a real life friend.

I quite enjoyed it, too, so much so that when he challenged me for our old Score Attack video series, I didn’t even get angry. That said, I can’t remember if I succeeded or failed at the challenge, so you’ll have to watch the video below and let me know.

Editor-in-Chief here at GodisaGeek, I organise almost every bit of content as well as running our weekly Podcast, and being the lead producer on our YouTube Channel. That means I'm very busy and sometimes grumpy. Yay!
MORE LIKE THIS
Octodad: Dadliest CatchSickhead GamesYoung Horses

Octodad : Dadliest Catch Is Coming To XBox One

Octodad: Dadliest Catch Released Today, On Sale at 20% Off for First Week