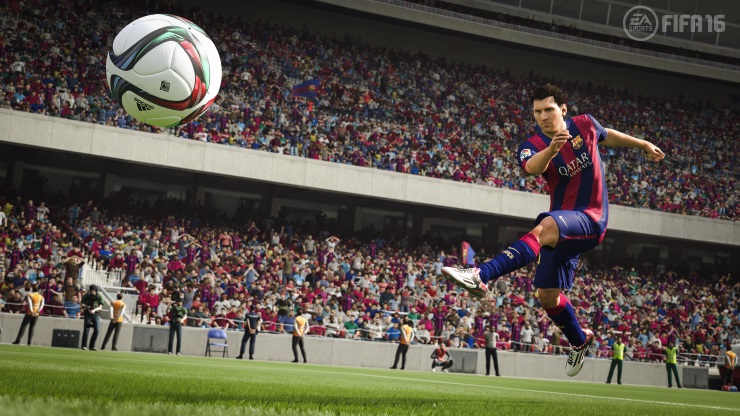 For the last five or so years, right around this time of year I would wait patiently for the slew of FIFA previews to hit the web so I could be the first to know about the big new changes. And every year, people have said the same thing: “I don’t think I can go back to playing the previous FIFA after playing the new one”. While, initially, I thought it was a load of rubbish, I can now confirm that it is true, after playing FIFA 16, going back to FIFA 15 is horrible.

“This year more than any year, that’s very difficult to answer.” Aaron McHardy, gameplay producer on FIFA 16, tells me during our interview, when asked what the main difference is between this year’s outing and FIFA 15. “The gameplay mantra this year is innovation across the entire pitch. What that means is that we are not leaving any stone unturned, we are going into every sub-system we have to make the game as clean as we can, as balanced as we can, so the sophistication of the engine can shine through. We are doing it with three big directives. One: we want to bring back confidence in defending. Two: we wanted to allow you to control the midfield, make the midfield matter and come to life the way that it should be in a football game, and we want to do all of that. Three: without losing the moments of magic and in fact trying to create more moments of magic, more jump out of the seat moments.” Despite the very on-message answer, what he says is true. It really does feel like every tiny subsystem has been edited in some way. Players feel stronger when battling an opponent shoulder to shoulder, the movement the AI players make is that little bit more on point, and the new animations make everything look more realistic.

“If you go back and play FIFA 15 I think the first thing you will notice when you play 16 is how different the players around you are in terms of winning back possession and interceptions. Interception intelligence is the first thing you are going to notice, because those guys are cutting out balls and trying to win the ball for your team.”

Of all the minor gameplay changes, this was the one that did jump out at me the most. In previous years my tactic has often been to contain players, force them into an early or bad shot, but never outright try and win the ball. Within minutes of playing 16 I was jumping in front of players to intercept, or poking a foot out to try and get the ball away before they could bring it under control – and the handy new air ball tackle animations helped a lot with that. Winning back possession has never been so easy, but at the same time it doesn’t feel like you ever have a pass picked off that didn’t deserve to be picked off. This was just one of the array of features that have been introduced to try and bring defence and midfield up to the same standards that the attacking play in FIFA 15 was. While it would be impossible for me to name them all (mostly because I’m sure there are some minor changes that I didn’t notice) there are some that stand out. Driven, more powerful passes can be sent zipping across the ground to your team mate with a tap of RB and A, making passes into tight gaps possible. Slide tackles have been made more realistic, as now you can get back up in one swift movement if you know your tackle will miss to continue chasing down the ball, and turning circles have been improved along with deceleration, and the ability for players to plant their foot to stop and turn almost instantly.

It all feels like it is working. Defensively, I no longer feel outmatched and forced to wait for my opponent to make a mistake. Instead, I can jump in for a tackle or slide for that interception knowing that if I fail I have a good chance of continuing to pressure with the same player, instead of being forced to drag someone out of position and create a massive gap. While in midfield, holding onto the ball and trying to carve out an opportunity is finally a realistic tactic, and the driven passes make it much easier to get out of a sticky situation.

But its not just the defence and midfield that has received some love, attacking play has also seen changes, albeit not quite as noticeably. Another of the flagship additions that the team were keen to point out was the no touch dribbling where you can allow your player to just let the ball roll, or stay stationary without touching it, if wanted. It sounds like a minor thing but being able to take a massive touch past a defender and then wait for the ball to slow down before crossing instead of having to keep up the pace to move forward is a major improvement, especially when I found crossing the ball in to be the most effective tactic. Getting into a position to actually cross the ball was not as easy as it was last year when playing as the likes of Messi and Ronaldo, but just how do the team decide what needs changing to make something that felt overpowered in 15, feel balanced in 16?

“That came directly from the feedback we got on the balance of FIFA 15 and how it easy it was to beat someone in a 1v1 if you have Bale or Ronaldo. People felt that if they missed a tackle, those guys would be in on goal. We want those best players in the world to still feel deadly, and that’s what moments of magic is all about. Fixing the problem of a player beating you in a 1v1 like Bale or Ronaldo is not a simple fix where you just slow that player down. So we came up with confidence in defending and a feature called defensive agility, which was a total of 15 changes that went in to try and get that 1v1 situation balanced.”

While all the changes on the pitch are small parts that lead to a big change, one of the largest new additions to FIFA 16 is the inclusion of women’s international teams for the first time. Playing as the women’s teams in FIFA 16 was perhaps the highlight of the preview session. The slower, more methodical pace of the women’s game (which was very well represented) suited my play style a lot better. The most frustrating part was their inability to volley anything with any real pace, as well as being unable to shoot from more than 25 yards with any chance of scoring. But the most important thing to note here is that it isn’t just a small addition, the women’s game feels totally different and offers a brilliant change if the faster male game gets stale. Adding in the women was certainly no easy task as they do look substantially different to the male players, but by adding them in the overall quality of all the player models, men included, have gone up. “Like I mentioned with simulating the hair, all of the men’s players with long hair now have simulated hair. The changes to the player rig and the render mesh have easily made the appearance of our male players a step above where they were last year. If you put them side to side with last year you’ll see that the male player physiques looks a lot more natural. Plus we can create players who fit outside of the mould like Peter Crouch and Akinfenwa, we can create those players so I feel like it’s a win-win all around.”

So then, FIFA 16 is what you would expect. It’s by no means revolutionary, but the slew of on-field changes make it a substantially different game to last year. Both defence and midfield have received a lot of attention, with the former barely being recognisable when compared to last year’s somewhat poor effort, but none of it is at the expense of the attacking play that FIFA has managed to do well in recent years. The addition of women is certainly welcome, and their different play style is a great way to have two substantially different options. It sounds like a ccliché and I hate myself for saying it, but I really did find it difficult to enjoy FIFA 15 after getting hands-on with 16 thanks to the plethora of minor changes that, together, create a whole new gameplay experience.

Oh also I almost forgot. Aaron keeps his ketchup in the fridge. eSports! I joined God is a Geek all the way back in September 2013 and since then have spent most of my time on Dota 2, and occasionally posting the odd review, news article or totally wrong predictions for The International. When I am not playing Dota I can probably be seen watching some kind of strange eSport or begging for more Twitter followers (@MikeStubbsy if you are interested). Aside from GiaG I am a computing student, football coach and major Apple fanboy.
MORE LIKE THIS
E3 2015ea sportsFIFAFIFA 16