Playing Eitr at E3 was Incredible, but not for the Reasons you might Imagine 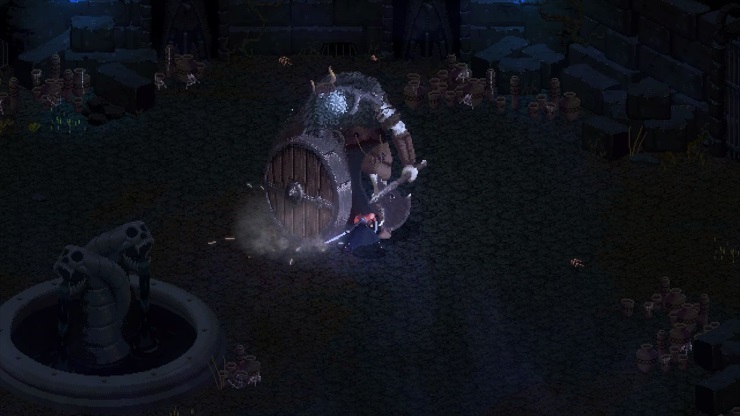 E3 is a bit of a crazy place, with massive building-like booths full of games and overly happy Americans giving you hints. However, this year Devolver Digital decided to head away from the convention centre and set up shop in a car park round the corner, with a DJ, free BBQ, and airstream trailers containing devs showing off their work.

After sprinting the 300 meters to the car park (which was behind some lorries E3 hired to hide the Devolver car park) I was ushered into one of said trailers (which mercifully had its own air-con system) and was met by two young developers and another well-known journalist. Right, I thought, I’m here, they’re going to show me an interesting looking game, the air-con is brilliant, the seats are comfy and I’m sat next to someone whose work I really respect, this should be cool. The devs launched into their intro; one playing and the other walking us through the basics. Eitr is, at its core, very similar to Dark Souls, but with a 2D, top-down pixel art style and its own lore. The dev is fighting a mini boss that apparently we are the first to see, using a sword and shield and staying mobile, dodging around the area and moving in for strikes at the right time. While they were going through why they decided to make the game there was a knock on the door. A man (who it turns out was Mike Wilson, one of the co-founders of Devolver Digital) popped his head in and said something along the lines of “Oh sorry, I thought you were free. Would Dougie (his son) be able to sit in and watch?” And with that, a small, bouncy seven-year-old entered. Dougie plonked himself down between myself and the other journalist, and sat and watched as the controller was passed to me.

After five minutes of playing, and Dougie asking some tough questions that flummoxed our hosts, such as “What do you actually do in the game?” and “Is this like Star Wars?” he asked if he could have a go and, being the nice guy that I am, I handed him the controller and sat back, expecting him to get bored of the difficult combat within a minute. But he loved it. It took him a while to get all the controls down, and did require the odd bit of assistance with the more complex mechanics such as locking onto enemies, but he stuck at it for a good ten minutes and really seemed to enjoy himself. The core mechanics were so simple that he was destroying his foes within seconds, and was seemingly doing a better job than me most of the time. This hardcore, incredibly difficult pixel art RPG that seemed so niche and inaccessible was picked up by a seven year old, and he loved every second of it. But that doesn’t mean that this is a game for a younger audience, the difficulty is sure to infuriate, the random loot system will add that extra bit of thought and the seemingly dark tone and story based on Norse mythology sounds like it could be incredibly interesting.

We were told that most of the core systems are now in place and the main bulk of the remaining work will be on content creation and polish, so while there is still a long way to go there is a lot to like already. The combat feels great, but is challenging enough to please the Dark Souls fans out there, and the art style really is beautiful. I’d go so far as to say it’s one of the best implementations of pixel art I’ve ever seen, and what little I know about the world and story already has me wanting to know more. But, most importantly, I really enjoyed my time playing and watching Eitr, and I have to say it was the strangest yet best moment of my first E3, and something I will never forget.

eSports! I joined God is a Geek all the way back in September 2013 and since then have spent most of my time on Dota 2, and occasionally posting the odd review, news article or totally wrong predictions for The International. When I am not playing Dota I can probably be seen watching some kind of strange eSport or begging for more Twitter followers (@MikeStubbsy if you are interested). Aside from GiaG I am a computing student, football coach and major Apple fanboy.
MORE LIKE THIS
Eitr

Devolver Digital showcased a ton of stuff at PlayStation Experience