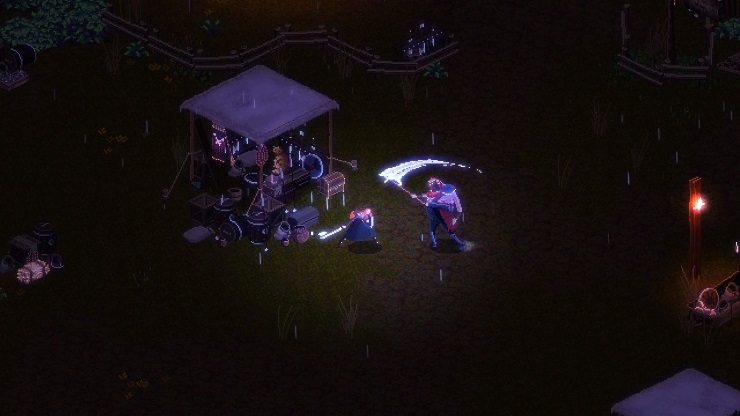 How do you follow a year like 2017? So many fantastic releases, many from indie studios, but it isn’t stopping there. This year has so much potential, with a few long-delayed, Kickstarter-funded games on the horizon. Assuming they actually arrive this year (worries will arise if they’re delayed any longer), 2018 could be one of the best indie years in quite a while.

But which ones should you be keeping an eye out for? Here’s seven that have the potential to be absolute stunners:

I was always going to start with this one. While others have been lambasting Capybara for releasing other games during the extremely lengthy development period of Below, I’ve been (im)patiently watching the drip feeding of information and footage from various events. Actually, that’s a lie; I’ve been moaning after every E3 without a release date. When it finally got a release window and then it was delayed “until it’s done,” I think I might’ve wept.

Taking elements from different survival games and adding combat mechanics similar to Dark Souls (yep, I’m mentioning that game), all wrapped up in an almost Zelda-like visual style; Below is a top-down action-RPG that takes place in the depths of a mysterious island. It also has an interesting roguelike mechanic, as each death sees you take on the mantle of a new adventurer, with your previous character’s corpse still holding on to their belongings.

If Below does finally arrive in 2018 (I’m predicting an E3 “and it’s available now” moment) then I’ll be first in line to get my grubby mitts on it.

Another game that has seemingly been in development forever. Developer Eneme Entertainment is really taking its time on this one, but already it’s gathered quite the following and it has produced endless gifs due to the sheer quality of its design and animation.

orse mythology is becoming all the more popular these days, with the new God of War just the latest in a long line of games and other media to embrace this incredibly deep pantheon of gods and monsters. As the Shieldmaiden, your destiny should have been simple, but Loki changed that when he introduced the substance Eitr into the mix, engulfing the great tree Yggdrasil in darkness and perverting the Shieldmaiden’s destiny.

What this means is that you’ll be fighting monsters in an isometric dungeon crawler, complete with..oh god, I have to say it again; Dark Souls-like difficulty and roguelike elements. But honestly, just watching in-development gameplay videos has me salivating, because it looks incredible.

And how often does Devolver Digital get it wrong, when it comes to publishing games?

Bloodstained: Ritual of the Night Koji Igarashi is a name synonymous with Metroidvania games. More specifically, the Castlevania games that helped to inspire the term. He worked on Symphony of the Night, even going on to produce most of the Castlevania series, including the incredible DS titles.

A few years back, he and his team created a Kickstarter for a Castlevania-inspired adventure. Initially asking for just $500k, the Kickstarter gathered over $5.5million and development soon began, with hype already at fever pitch at the thought of a spiritual successor to Symphony of the Night.

In 2016 a demo was released to Kickstarter backers and was met with much praise and general joy; not something you often see in this industry these days. It really looks like it captures the visual and gameplay style of those classic Castlevania titles, and let’s face it, Konami doesn’t seem to be interested in the franchise anymore, so even a spiritual successor like this is better than nothing. Or Lords of Shadow 2. “But Gaz,” I hear you cry, “this is DLC for an existing game, it shouldn’t be on this list!”

You have a point, but guess what? This is my list and damn it, I’m bloody well putting King of Cards on it. I’ve recently played through the main game on Switch, plus I’ve been struggling through the bastard ‘ard first DLC, Plague of Shadows and pulling my hair out in frustration, before I moved onto the third episode, Spectre of Torment. But it’s such a fantastic game and I am eager to see what Yacht Club brings to the table with this latest addition. Plus, King Knight is such a lovable idiot, ripe for a fun piece of DLC.

I know this technically came out in 2017, but only on Steam Early Access. 2018 sees this spiritual successor to Sensible Soccer arriving on PC and consoles and people should be excited by this. Let’s face it; football games are basically represented by po-faced simulations and not much else, these days. Sociable Soccer aims to bring back the fun of fast-paced, arcade footie complete with ridiculous parodies of real player names.

Already the game has been improved since launch, with the AI and goalkeepers significantly better than in the version I previewed last year. More game modes will be introduced and it’ll even include an homage to FIFA’s Ultimate Team by the time it hits its intended formats (almost all of ‘em, really) later in the year.

Look, no matter what you think of the whole controversy surrounding Tim Soret that came about following The Last Night’s big unveiling at last year’s Xbox E3 briefing, it’s hard to deny just how good the game looked.

Cyberpunk is already in the middle of a resurgence, thanks in no small part to the return of Blade Runner last year; and The Last Night looks heavily inspired by that franchise. Looking like a glorious mash-up of Blade Runner and games like Flashback, all with a delicious layered 2D pixel art visual style.

Hopefully Odd Tales can deliver on the quality shown in that E3 trailer.

Not quite your traditional indie game, but Warhorse Studios went through hell to get this game funded through Kickstarter, after unsuccessfully attempting to find funding through publishers beforehand. Despite Deep Silver eventually taking on publishing duties, this is very much an indie game at heart, only it lies somewhere in that grey area recently occupied by Ninja Theory’s Hellblade: Senua’s Sacrifice: not quite fully independent, but also not AAA. I suppose the term is AA, but that somehow sounds derogatory to me. Like it’s somehow less than those games with massive publisher backing.

Regardless of your stance on this, there’s no doubt in my mind that it looks incredible. It’s essentially a fully open-world RPG a la Elder Scrolls, only without the fantastical myths and monsters. Kingdom Come: Deliverance is historically authentic, plus you won’t be a one man army as you’ll need to eat and sleep to stay alive, not just fight and earn loot/XP. With horseback combat, real armour and weaponry from the 1400s, the level of detail on offer is astounding.

Only time will tell if it can stand side-by-side with the likes of The Witcher 3 and Skyrim, but considering the much lower budget and the more independent nature of its development, one can only hope that Kingdom Come: Deliverance can, ahem, deliver on its potential when it releases on February 13th.

These are just a handful of indie games due this year, not to mention the ones that haven’t even been announced yet, plus ones that have already arrived (Iconoclasts and Crossing Souls, I’m looking at you). It really looks like 2018 could be another cracking year for independent games.