Hands-on: Salt & Sanctuary is a game you really should be paying attention to 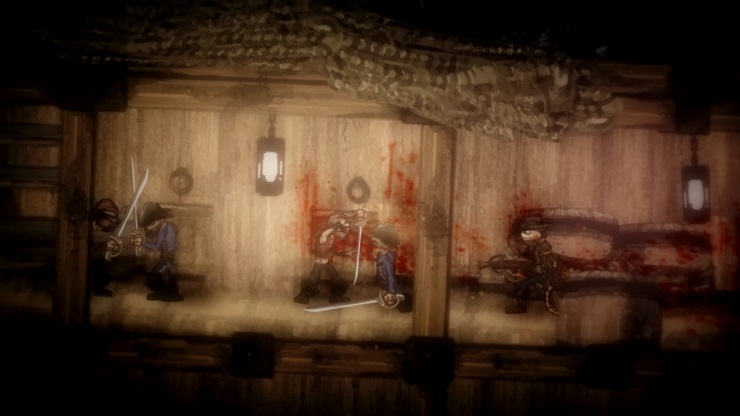 You’d be forgiven if you happened to miss Ska Studios’ Dishwasher: Dead Samurai or its sequel, Vampire Smile, when they launched on Xbox Live a few years ago. You’d also be forgiven for overlooking the less well-received Charlie Murder not long ago (though, if you did skip the Dishwasher games for whatever reason, and you have access to an Xbox 360, I’d urge you to play them both: they’re fantastic).

Which is why Salt & Sanctuary is such a brutally pleasant surprise. I’ve been playing some early code of two sections, one with level three characters and one with level twenty, and the Dark Souls influences are hugely prevalent – except it’s a side-scrolling adventure rendered in Ska’s trademark washed-out aesthetic. The demo begins with the main character on the shore of a mysterious island. There are four heroes to choose from: two “beginner”, and two “intermediate”. Whether you can create your own or you have to pick from a roster is unknown at this point, but we wouldn’t gamble against the former. The skill tree (literally a huge, multi-branching tree) is enormous – zooming out to take it all in is daunting – which suggests you can create malleable archetypes to shape how you please.

Each character has a variety of weapons and a full set of interchangeable armour – chest, legs, gloves, helm – and a selection of item slots that make switching between curatives and buffs on the fly simple and intuitive. The first character I tried, Strong Corbin, mixes sword-and-board melee with a bow for ranged damage. L1 switches between weapons, while L2 blocks and R2 performs a combat roll. Standard and Heavy attacks are mapped to Square and Triangle, as usual, but they form some brutal and fast-paced combos which initially feel at odds with the careful approach Salt & Sanctuary demands. After a while you realise that, as in a Souls game, the onus is on blocking and evading until the enemy leaves you an opening to do as much damage as possible.

The second beginner character is a cleric with a healing spell who begins in cloth robes. Exploring with her, I found a set of Thief armour, which seemed more in keeping with her swift dagger combat style, but at odds with her secondary weapon, a two-handed mace. Such diversity adds credence to the idea that all the characters will be extremely malleable. You can only save the game at a Sanctuary, and that’s where you’ll return when you die – which will be often. Like bonfires, these safe rooms are where you’ll need to travel to refill your supply of curatives and level up. In the intermediate area, a blacksmith appears here to upgrade your gear or sell you new stuff, but I couldn’t find the necessary materials to do the former. I did cycle through the items and upgrades available, however, to note that every minor improvement could be the difference between life and death.

While you can buy items with gold that falls from enemies and remains constant even after death, the main currency for upgrades and leveling is salt. It drops from enemies, or you can find it in bags and pouches to use when you need it. Upon death you lose your accumulated salt and must retrieve it, like souls or blood echoes. A couple of mistakes is all it takes to get very dead and find yourself back at the Sanctuary where, through blurred vision, you witness a mysterious benefactor dragging your body into safety.

Each section ended with a boss fight. At level 3 I faced the Sodden Knight, a huge Pursuer-type enemy who electrified the ground and hammered me to death with his enormous sword. It took me several attempts to finally beat him, and when I did the feeling was akin to dropping the Cleric Beast in Bloodborne. It was a matter of hanging back and learning his tells, avoiding his attacks and only retaliating when I had a clear, safe moment to do so. The other boss, the sword-throwing Queen of Smiles, I found tougher, mainly because the intermediate character I chose was melee-centric and his massive two-handed damage output was balanced by a lack of maneuverability. There’s no map, but like its older, bigger budget cousins, Salt & Sanctuary’s level design is clever, and finding my way back to the boss each time was easy, despite the multiple levels and routes through each area.

After several tantalising hours of play, the demo left a lot of questions, such as why you’re on the island, why it’s overrun with zombies, monstrous hounds and killer bats, and why some people want to help you. There’s also an initial choice between three religions that must have a bearing on gameplay down the line. I can’t wait to see these questions answered when Salt & Sanctuary is finished, and available to buy.

What I know right now is that this is Ska’s most ambitious game to date, as well as it’s most carefully considered. This isn’t a game for mashing buttons; it’s a game designed to be faced with determination, skill and patience. The haunting water-colour art style drips with atmosphere, the sound design is spot on and the gameplay feels smooth and responsive. There are a few months of development left to go, but as it stands there’s every chance Salt & Sanctuary could be the best Souls-esque game that no one has heard of. Keep an eye on this one – you won’t be disappointed.

This preview is based on in-development, and as such, unfinished code. But stay tuned soon, as we’ll bring you some video of it.
Liked it? Take a second to support GodisaGeek.com on Patreon!

Senior Content Editor Mick has been playing games for over 30 years and writing about them for around 12. After drifting from site to site for a while, settling briefly at the now-defunct Made2Game and freelancing for the gone-but-not-forgotten NintendoGamer Magazine, he came at last to rest at Godisageek. Mick has been a reviewer, staff writer and content editor here for some time, while also moonlighting a little for Red Bull Games. He has 4 kids, has written 2 novels, and sometimes even manages to pay a bill or two. You'll usually find him defending the galaxy in Destiny 2, battling evil in Diablo 3, or lurking in the background on Twitter. Find him there @Jedi_Beats_Tank, or on XBL (JediWaster247), PSN (Jedi_Waster) or Nintendo (JediWaster).
MORE LIKE THIS
Salt & SanctuarySka Studios

Salt & Sanctuary is coming to Nintendo Switch next week, Physical edition announced for later this year