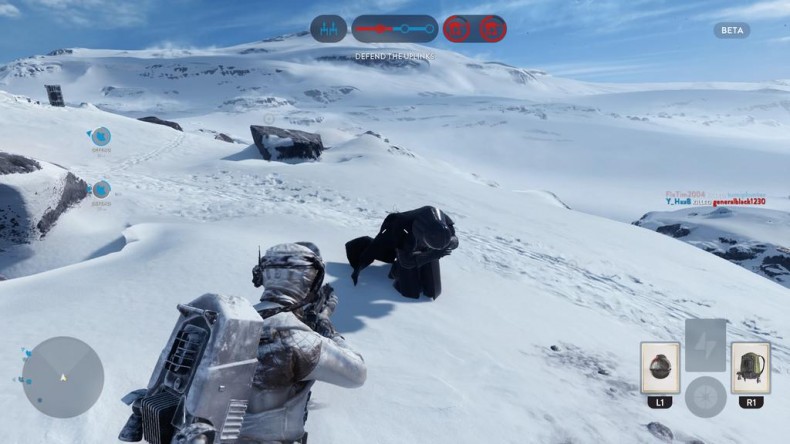 It’ll be no surprise to you to learn that we talk a lot behind the scenes here at GiaG. We use a chat programme called Slack, and sometimes it’s boring organisational crap (though not as much as you’d expect), other times it’s about you guys, our readers (and what GREAT people you all are *cough*). Mostly though we talk about games, and so we thought we’d bring you some insight about how we talk when we’re not previewing/reviewing things, but playing like normal gamers.

This week we’ve been discussing the Star Wars Battlefront Beta, so please, sit down, grab a brew, and enjoy the product of our Slacking Off.

Mike: Hmm. Battlefront beta is okay. Got to say after playing both betas I’m much more excited for CoD now.

Rich: Battlefront is great but suffers from the same infuriating issues that Battlefield does. Simply put, if you are in there from the beginning, if you put hours into this, then you’re going to dominate. Easily. There are people that have been on this since it was released and they simply cream everyone else.

If they go down the Crucible route a la Destiny and level the field, it’s going to be great.

If they don’t, it’s going to be great for battlefield fans and put off everyone else.

Chris: I just spent a little time on it and I have to agree. It looks so good and plays really well, but I got battered.

Nic: I’m not too sure about it either. It looks amazing, the sounds are perfect, but only one map per mode meant I got bored of it quick. I know it’s a beta, but it could do with some variation. Makes me worried for the full game.

Think Walker Assault is a better mode than the Drop Zone one though.

I ended up hating BF because of all the shitty tactics people use.

Nic: I don’t think it is a re-skinned battlefield, but it will inevitably turn into a game of shitty spawn camping tactics

There seemed to be an element of that in the Drop Zone mode, but at least the spawns change frequently.

It’s much faster than Battlefield in my opinion though. Lee: As someone who’s shite at shooters, I found it quite accessible and the pace is nice and quick as well. Looks and sounds great too.

Cranked up the surround speakers and it was exactly what you’d expect from a Star wars experience.

Nic: The sound is PERFECT. The blaster noise, the sound of the TIE fighters, it’s amazing.

Rich: The atmosphere is outstanding.

Lee: The weapons I used felt good as well, not too weak. It has definitely got that EA extra polished presentation. I also noticed there are three different display options for colour blind folk, which is quite impressive.

Mikhail: The UI actually is done well, something rare in most games. The menus etc.

Nic: As someone who hasn’t played BF4 I can’t comment, but my extensive experience of BF3, and to a lesser extent BF: Bad company, Battlefront is a much faster game.

Battlefield always felt to me like I would be running for ages, finally get near the objective and then die, rinse and repeat. At least in this, you die, respawn and are back in the action in next to no time.

Murph: Battlefront is very good and the sound design is incredible. Though I feel that the maps are too big/there’s not enough players in them.

Murph: Only on the other one so far, which is 8v8.

Nic: 16 players is still a lot. And the map you’re playing on is pretty small.

Rich: Destiny still does PVP better in my opinion.

Nic: I got in a TIE fighter, but died in no time.

Heh, Bungie have a huge pedigree in it.

Rich: I got the AT-AT and tie and x wing.

Chris: I killed Vader! Then got twatted by an AT-AT.