From Beauty and the Beast to King’s Quest: An Interview with Voice Actor, Richard White 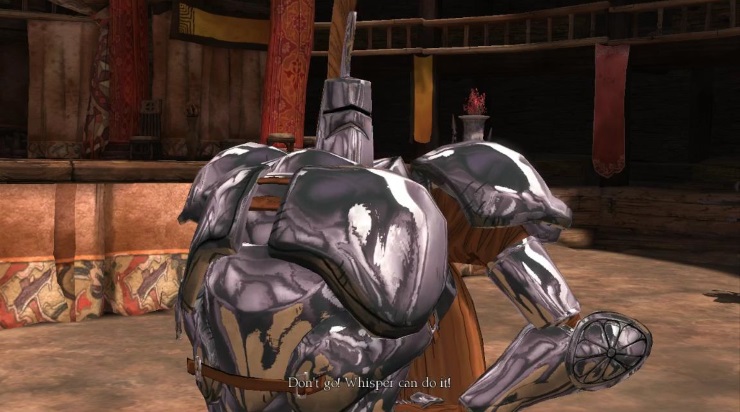 One of the most delightful and charming titles I’ve played so far this year is the first chapter of King’s Quest, a new story in the already established world of Daventry.

It’s a whimsical, almost fairy tale-like adventure and I enjoyed it greatly. So when I got offered the opportunity to talk to one of the voice actors from the game, I really couldn’t resist.

I chatted with Richard White, who plays the role of Whisper in King’s Quest, and who you’ve most certainly heard at some point in your life; playing the character Gaston, from Beauty and the Beast. I wondered if there were many differences between voice acting for a film and a game.

“Not really.. but in a way yes, yes there are some differences. On a game there are many possible outcomes and you have to voice each possible outcome. So you react differently in each case, where as in a film you know what the ultimate outcome is going to be so you can see ahead a little bit in that way. Each brings its own challenge and its own opportunities for creativity.” So has Richard enjoyed his time working on King’s Quest thus far, and is video game voice acting something he’d like to do more of in the future?

“I would love to do more! We’ve had more fun then aught to be legal. For each change and each challenge that the player faces you get to experiment and to try something different, maybe even five different things. You go back and forth with the directors, designers and the producers and you end up laughing a lot.”

Would he describe himself as a fan? Did he play much going into King’s Quest?

“I think I might be the wrong generation. When I was at that age we were watching cartoons and the imitating voices. We didn’t have games to get used to. By the time I started getting curious about games my fingers weren’t as quick as my daughter’s.” Inspiration is always important, so what were Richard’s motivations for getting into the job?

“I have always been an actor and have always been a singer, so when Beauty and the Beast came along and I got a chance to wet my feet in that pond, it just seemed like so much fun and so fascinating. It’s a different thing from being on stage, because you get to go back and try again or experiment differently time and time again.

Beauty and the Beast’s Gaston is a huge role, how did being involved in such a huge Disney movie affect his career?

“In some ways it affected it a great deal and in other ways not at all. It’s funny. Many people draw a very clear line between those two sorts of things (voice acting and theatre). Of course when you mentioned Beauty and the Beast everybody is familiar with that and everyone goes “oh my goodness”, so it’s quite wonderful in that regard. But on the other hand, when it comes to getting up on stage the challenges are quite different and people tend to be very prejudice. They think that the demands of their particular venue are very specific, and they are they’re quite right.”

So does he prefer theatre, or voice acting – and how do they compare?

“Well, voice acting of course you can do in an afternoon and then you can come back and do it tomorrow afternoon. Stage acting you have to prepare over a long period of time, and it’s a larger effort in a way, on one particular project. You work very intensely for weeks and months, and if you’re really lucky years, and it’s a very intense thing for that amount of time. Where as with voice acting we could lay down all of Beauty and the Beast in one afternoon, and then come back after the designers have worked with you voice and rerecord if needed – it’s quite different. Also in stage work there’s no net, you don’t get to try again. You’re in front of an audience with another actor and the two of you have to find your way through the scene. Where as in voice acting you can be as off the wall as you like and then the designers can probably draw what you’ve just imagined. But, on the other hand, if they have specific ideas in mind you can always take another swing at it.” From my time with King’s Quest, Whisper (Richard’s character) has mannerisms and characteristics that are reminiscent of Gaston. Did he purposefully channel the spirit of Gaston into Whisper?

“Well I think they [The Odd Gentlemen] did when they conceived it. When they first got a hold of me they said that they were going back and forth into trying to imagine what Whisper aught to sound like. They thought ‘you know he aughta sound kinda like Gaston, who can we get who might sound like Gaton?’ And they mulled over it for a very long time before they said ‘I got an idea, lets call the guy who did Gaston’. So they had that sound in their ear and mind.” Back to Gaston: was he given guidance on how he should sound, or did he come up with it on his own?

“Howard Ashman, who wrote it and conceived it, was a very expressive guy and a wonderful director. He wasn’t the director of the film but he did sort of direct the creation of the creative work. So he was extremely helpful in that regard. He didn’t so much tell you how to do it as to lead you into finding it yourself.”

I mentioned that Gaston was quite a vulgar, sexist character, at which point Richard jumped in and sounded shocked – apparently he’s just misunderstood. We laugh, but I wonder if it’s difficult to play such a sleazy role, or is cringe-worthy?

“It’s wonderfully freeing to be able to be as vulgar, or as sexist, or as outlandish as that. There are no consequences to being that kind of character in that situation. It’s fun! It’s cathartic, in a way.”

So what’s on the horizon for Richard?

“I’m still promoting King’s Quest and am going to a signing session soon, which are always fun. But in musical theatre in New York City you’re always going from job to job. Audition to audition. So it’s hard to see more than a few months ahead.”

Of course, no interview would be complete without the important question…

After he answered I explained why he was wrong and then we had a scintillating chat about the dynamics of ketchup and the value of the cold contrast of the sauce on hot food. Seriously.

And that’s what really summed up my enjoyable chat with Richard; as he was an intelligent, humorous man who was great to talk to.

Read our hands-on with Chapter Two of King’s Quest.