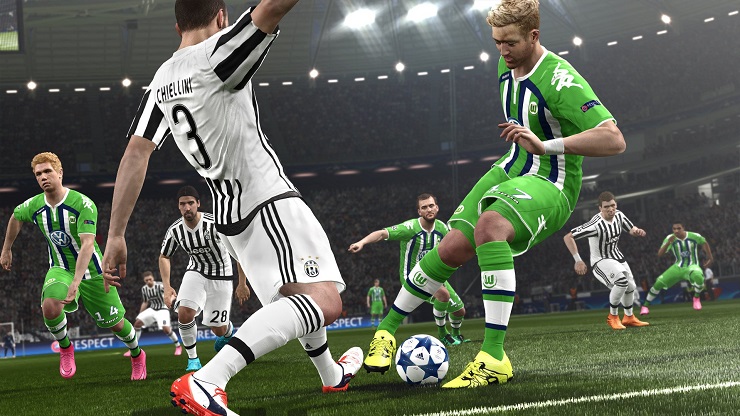 Last night, in preparation for Euro 16, myself and my brother-in-law played Ireland V Belgium. I’ve already booked my plane ticket to Bordeaux to watch Wes Hoolahan destroy Vertonghen and his back four buddies, but I wanted a little preview of what’s to come on June 18th. If a 4-2 loss to the apparent world no. 1 in a videogame is some form of premonition, I’m worried, but, Pro Evolution Soccer 2016 very much resembles real life; if you’re playing as a worse team, chances are that you’re going to lose, unless you play out of your skin. It’s evident after only a few matches that PES doesn’t just show care to the Mullers and Bales of this world, but also makes sure that the likes of Lee Cattermole and Alan Hutton feel right. Every team plays differently and every individual player is suited to specific roles due to their attributes.

Like water straight from the spring, PES’ passing game is fluid and quick. Maybe not as realistic as some competitor’s titles, PES wants you to attack and flourish in front of goal. Have a pop from outside the box because you’d never know if Gigi Buffon had an extra mince pie after his dinner on the 25th of December. However, I wouldn’t call PES an arcade experience because of features like its collision system which, while annoying at times, is what happens on a wet and windy Tuesday night at Stoke. Players get tangled up chasing after a 50/50, resulting in some crunching challenges that would make even the ‘ardest of geezers wince.

Player movement is also more natural than other games of its ilk, with Neymar having to morph body shape if he wants to redirect his run, rather than spin around on a 50 pence piece like something from Swan Lake. When playing as the Catalan giants, the Brazilian will be called upon to make swift changes in direction to pick out Messi’s darting run on the opposite flank, crying out for a peach of a ball to his feet.

Master League is the best it’s ever been too, and, while not anything close to the depth of Football Manager, is constantly making strides more befitting of an aspiring gaffer. Promoting youth team players gives them a boost in confidence and thusly, your entire team will improve. I can’t stress how important your first eleven’s chemistry is; it’s not all about playing a front three of Suarez, Vardy and Lewandowski, particularly if the Foxes’ tour-de force isn’t fitting into the system. When players reach maestro or legend status, they’ll give you an extra bit of cash thanks to merch sales, which you can then spend on bringing in their replacement in the transfer market.

It’s not perfect, though. The only way to get sent off is if you literally pull a gun out of your shorts and put a bullet between the eyes of the ref, it seems, the patch which updated squads took an absolute age to come, goalkeepers can resemble Massimo Taibi (#neverforget) on occasion, FIFA’s Super Sunday presentation still trumps Drury and Beglin’s ramblings and Southampton are known as Hampshire Red. However, with all that taken into account, Pro Evolution Soccer 2016 is the best association football game of all-time and most definitely one of the best offerings of 2015. I just hope we can sneak something off the Belgians in France.