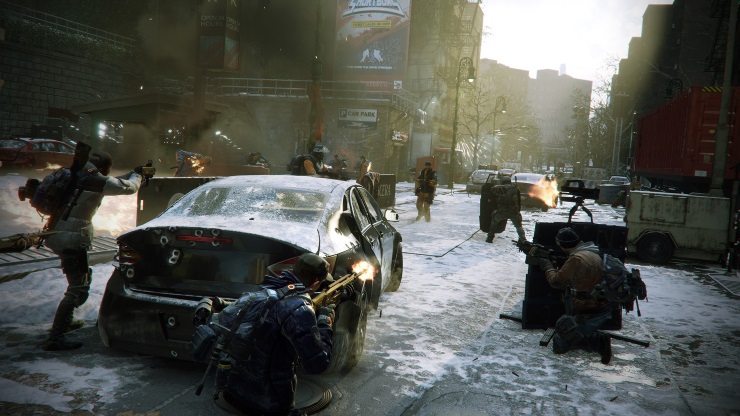 Let’s cut straight to the chase, here. I have played four hours of The Division and that playtime has made it the game I am most excited about that is coming out in the first half of the year. There is a lot to talk about, most of which will be positive, but I will preface the whole thing by saying that the two areas that I am concerned about are the story itself, and how enjoyable it will be without a good group of friends to play with, similar to Rainbow Six Siege.

It all started with being dropped into the New York City at level 4, so it was very early on in the story and overall character progression. The most noticeable thing about the snowy city is that it isn’t some kind of post apocalyptic wasteland. Civilians still roam the streets, some services (such as electricity) are working as normal but there is a clear sense of panic and fear. Within moments of walking into the city a man stumbles down the sidewalk near us, coughing his lungs up and falling to the floor. Clearly he has been infected with the virus that was spread on Black Friday and looks to be in pain. Situations like this are commonplace, random encounters and even simple AI behaviour like this will lead to multiple distractions when in the city. Random hostage situations frequently pop up, and with the patrolling enemy factions roaming the world a combat encounter is never far away, if you go looking for it. The point is that the world feels like it’s alive, and it’s rare that nothing is happening somewhere close to you, but of course you can choose to ignore it.

New York isn’t just a city to explore and marvel at, there’s a reason you’re here. The virus needs to be contained and it’s your job, along with the rest of your squad, to make sure that happens and try and fix this mess. The missions I got to play involved trying to locate people or items in order to build up one of three wings of our base of operations. Each of the three wings has its own mission, and the two that I played involved going to a location and shooting a ton of guys. While that may sound like they were very similar, they were actually very different – one saw us fighting mostly indoors, in small spaces and eventually up onto a roof, whereas the other was mostly outside, in a tunnel full of abandoned cars. Other than those missions we didn’t get to see too much in the way of the story. It’s an interesting premise, and when backed up by the incredible city it could be great, but for now I’m still concerned it could end up mediocre. The actual act of shooting itself is very good. Each of the key types of weapons feels significantly different and (mostly) satisfying. The shotgun felt like the weak-link, while the sniper rifle, with a couple of mods, felt a little too strong, despite the fact that there is a good second or two of blurred vision when you fully zoom in. When you hit an enemy, the amount of damage you did shoots out of them as in Borderlands, which allows you to find weak points on some of the elite enemies.

Each of the main mission areas we explored were very well crafted with plenty of well-placed cover. Snapping in and out of it is smooth and I only accidentally moved out of cover a couple of times. Staying hidden is key, as enemies will quickly down you given half a chance (providing they are of a similar or higher level to you). Using cover well also allows you to take the aggro away from a teammate who is being targeted, to allow them to heal up or re-position.

Strategy with your team will also play a big factor in the harder fights. Generally speaking, sticking behind the same piece of cover won’t work too well, but flanking opponents and attacking from different angles will. You also need good synergy with your skills. Each player can take three skills, which vary from generally helpful items, to heals, or damage items. Personally I favoured taking a turret you can throw onto the ground, some deployable cover to keep myself safe when pushing through open areas, and a area of effect heal that would instantly revive downed teammates and take them all back to full health.

Perhaps the most exciting part of The Division is the dark zone, which is the lawless PvP section of the world. Taking up a massive portion of the middle of the city, the zone offers up some of the biggest challenges and coolest loot. The area will be populated not only with AI but also other players who can kill you. What’s really interesting here is the possibility for incredible encounters, you may come across a squad and discover by using the proximity based voice chat that you have a common goal such as taking down another rogue squad or using an extraction zone to secure your awesome loot. You can then form a gentleman’s agreement and work together, but there is also the option to stab them in the back at any point. Of course this could just turn into a massive deathmatch, but I feel like people will want to use this area in interesting ways and thus the mind games that spawn from it could be phenomenal.

With only a few months until launch there is still a lot I’m unsure on: the story could flop, the dark zone could become something you avoid at all costs, and there is a chance that playing alone is almost impossible from a enjoyment perspective. Also, there were a few technical issues that are of concern, but hopefully the remaining months can be used to tidy the game up – it’s not a final build, after all. But there is also every chance that they get all that right, and when you add in the superb mechanics and amazing city it could genuinely be an early game of the year contender.

Preview based on a trip to Sweden, Ubisoft paid for travel and accommodation.
Features, Reviews
The DivisionUbisoft

eSports! I joined God is a Geek all the way back in September 2013 and since then have spent most of my time on Dota 2, and occasionally posting the odd review, news article or totally wrong predictions for The International. When I am not playing Dota I can probably be seen watching some kind of strange eSport or begging for more Twitter followers (@MikeStubbsy if you are interested). Aside from GiaG I am a computing student, football coach and major Apple fanboy.
MORE LIKE THIS
The DivisionUbisoft