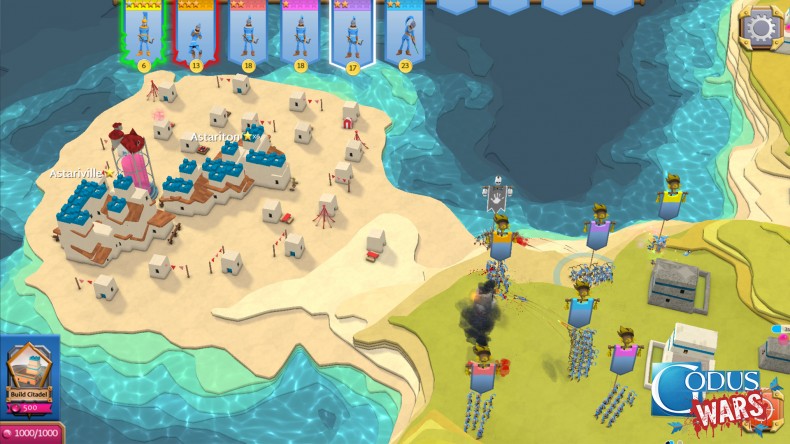 If you’re wondering how 22Cans almost-forgotten god simulator was getting along, you can wipe that notion from your mind. There’s a new title in town.

22Cans today launched Godus Wars onto Steam Early Access, a follow-up to their 2013 crowdfunded effort Godus. The title costs £10.99 on the store, but will be made available to all Godus Kickstarter backers free of charge.

Godus Wars is a more combat-orientated take on the god simulator Peter Molyneux originally created. In an update on the game’s Steam page, Molyneux described how he came to create it: “We’ve always loved the landscape forming, changing and sculpting but quickly realised that it’s slightly more uncomfortable to do a lot of sculpting with a mouse. Really what it lacked was brutality, was war, was the ability to take on challenge and use your god powers and sculpting powers to fight, war and battle. And that’s where our initial concept of Wars started.”

The team at 22Cans chose to create an entirely different title rather than integrate a combat mechanic into Godus, which Molyneux explains: “We also had this idea of making it far more fluid and far more focused on battles rather than focused on belief and spreading people. We created a completely new GUI which was more orientated towards troops and battling. It has the ability to group troops together and mix troop type together was at the centre of our thoughts.”

“What we’ve ended up with is a true mix of a god game and a RTS with the ability to build your own deck of powers and buffs. We’ve got all sorts of surprises in the game. Try playing around with the globe. See what happens.We really wanted to make this brutal, we wanted to make it funny and we wanted to make it exciting. I feel we’ve really done that and I can’t wait to see what the community thinks.”

According to MCV, Bryan Henderson, “Godus’ God of Gods” makes an appearance in-game after winning Molyneux’s experimental Curiosity: What’s Inside the Cube Game.

Currently an English, Journalism and Creative Writing student at the University of Strathclyde. Based in Glasgow, I spend most of my free time playing video games ranging from Japanese visual novels to horror games. You can contact me at greg@godsiageek.com!
MORE LIKE THIS
22CansEarly AccessLaunchPeter Molyneux

The Dirtsheet – Xbox One Used Games, Curiosity is Over