Preview: The Best Thing about Telltale’s Batman is Bruce Wayne 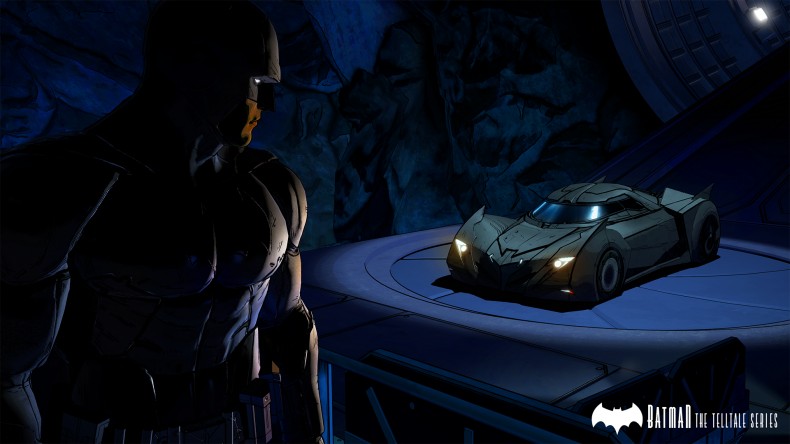 My last appointment of my first E3 was in Telltale’s swanky little booth to see their take on the masked crusader, the dark knight, Batman himself. After conversing in a Wayne Manor bar and reading some fairly amusing tweets on the news vidi-printer (a lot of people are shipping Catwoman and Batman apparently), the secret door hidden by a grandfather clock slid open and we went into the Batcave to see the first 30 minutes of the first episode of the new series.

What immediately struck me as the Bat started slinking through the shadows and making the naughty robbers shit themselves is that Batman looks a lot better than previous Telltale titles. The squiggly lines that cursed Game of Thrones has vanished, the art style was strong, and really suited the comic book style of the source material. It’s still very clearly a Telltale game, but it looks considerably better. The demo was obviously a vertical slice and everything, but it seemingly ran a whole lot better than what we’re used to. There was no weird clipping or tanking framerate in combat situations, everything ran smoothly and it looked like a better experience as a result. Hopefully it’s heeded the advice that has been being screamed at them for years now and have decided to get their games running properly.

The opening sequence sees Batman storming into a sky rise to halter the plans of some opportunistic thieves who were hoping the Bat wouldn’t show up. But as they began to fall one by one, hunted from the shadows, they began to frantically panic. I enjoyed how palpable the fear of criminals was. Eventually Catwoman turns up and then the pair start having a fight over the floppy disc the Cat was trying to steal. This is where the demo started falling apart a little for me. The dialogue between the Bat and the Cat made me cringe, with lines such as: “you can’t change a wild animal”, “well it’s time you were put in a cage!”, but that is forgivable because it based off a comic book after all. My real gripe was that a lot of the dialogue and themes shown in the intro – and it was only the intro – all felt like ideas we’ve seen before. It did feel like just a re-tread of all the Nolan ideas. However the guy who presented the demo did say that this is an original story and you “shouldn’t get comfortable” because the story will be going in a completely new direction. Another thing that I felt slightly let down with was the combat. It was built up a little bit before the demo, and it only transpired to be more QTEs with slightly more variations of button inputs. There is a system in which you can combo the QTEs, and if you do it well enough it will lead to Batman unleashing a vicious “final strike”. They did look cool but, again, the combat didn’t look all that different from typical Telltale at all.

So while I felt slightly let down by Batman, the man behind the mask grabbed my interest massively. Now, the design of Bruce himself isn’t good at all and really doesn’t strike me as Bruce Wayne. He’s short, got a weak chin, crap hair, and his voice is lacking that manly gruff. In fact, Harvey Dent actually struck me more as a Batman with his physicality and crimson chin, but that’s by the by.

With Bruce we see him attending a gala in his own home which in aid of drumming up support for Dent’s bid for mayor of Gotham. We see Bruce glide through the floor with his charisma as he greases hands and talks with the people to secure votes. I really like the different ways you could approach being Bruce: you could either go at it as the pompous, big headed, dickhead playboy everyone thinks he is, or as a smart, thoughtful and genuinely nice guy, or even be angry and righteous, basically being Batman without the mask, and everything in-between. The one correlation with every mask you can choose to have Bruce wear is that he’s far more comfortable wearing the Bat one, and I really like how apparent that’s been made to be. From the first 30 minutes at least, it seems like Telltale has made Bruce Wayne genuinely more interesting than Batman by making him a complex and compelling character. It was revealed that later on in the game you can choose to approach certain situations as either Batman or Bruce Wayne, and I’m really excited about the possibilities and choices that could present. Later on in the evening, Gotham’s big crime boss, Carmine Falcone, enters the gala at Dent’s request as he wants to get the influential mobster on side in order to secure the office. I also really like how they’ve made Dent slightly immoral, and he isn’t the straight-laced crime fighter we’ve previously seen, it makes him a lot more interesting. Falcone holds a private audience with Bruce and then you have the chance to be subservient to him or stand your ground and let him know you won’t yield and be corrupt. It’s an interesting and tense scene, which unfortunately saw the demo come to an end. I’m really interested to see the repercussions of the choice.

So while the Batman stuff left me feeling a little unsatisfied as I’d felt we’d seen it all before, the Bruce side of the demo was really interesting and this could be the aspect of Telltale’s Batman that sets it apart from everything else in Batman media. Because with all the great Batman games and movies, it’s about time we had a great Bruce Wayne story. Some other interesting tidbits from the demo:

This is still a relatively young Batman. Bruce has been the Bat for a short while, and he is now very competent at fighting crime, but he’s still pretty green and hasn’t met many, if any, of his greatest foe yet.

Arkham Asylum got a couple of conspicuous mentions and I would suggest that indicates that the Joker will show up sooner or later.

In some free walk moments, Batman will be able to enter detective mode.

MORE LIKE THIS
Batman: A Telltale Seriese3 2016Telltale Games

Batman: A Telltale Series – Episode One: Realm of Shadows Review