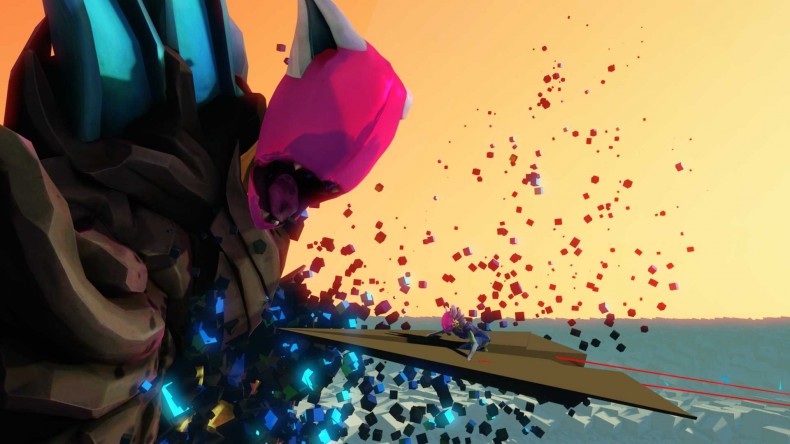 I had never heard of Bound before I played it, but as I aimlessly wandered around Sony’s area thinking I had played everything I was interested in, Bound’s bright and vibrant colours caught my eye and so I wandered over for a go. Why not, right? Bound wounded up being one of my biggest surprises of the whole of E3.

Initially it seemed like a really pretty but also rather bog standard, run of the mill platform game. One of those titles that looks lovely and seems interesting, probably has a weird, ambiguous story that’s told through the environment – all that type of stuff; you know the script. And while the stuff about it looking really bloody good and having a strangely told story is true, it’s so much more than a bog standard platform game. My demo wasn’t too long, ten minutes at the absolute most, but I was left wanting a whole lot more.

You play as a dancer/gymnast lady who’s been tasked to go and sort something out in the world by the queen. Being a dancer, the character has much more to her move set than just run and jump. As well as those she can twirl, roll, and sway. All these moves seem rather superfluous on their own and it isn’t initially clear as to what the point of them are. But before long it clicks that if you combine all these moves together as you move the character through the world they combine together to not only make the character move faster, but with every combined move, various coloured ribbons will start flowing to make a beautiful whirlwind – like the most gorgeous ribbon dancer ever. The spectacle just added to the surrounding beauty. The world that you explore is always moving and folding in on itself, with vivid colour contrasting the vast spaces of white. It’s quite hard to describe and I worry I’m not doing it real justice. All the individual moves the character can do flow so well together and look incredible realistic. The position of the arms, the arc of the legs, the curvature of the backs: it all looks as if the moves have been created by getting a real gymnast in and putting one of them ball-suits on them to recreate the movements precisely in the game.

On the platforming itself, it feels as good as it looks. The jump is lengthy but has a weight to it and it combines with the other moves really well. There was even a brief section when I had to do some wall jumping, and that felt great, too.

I really wish I had more to report on but my demo was very brief and it only gave me a glimpse at these mechanics that I feel could have a great deal of depth to them. Unfortunately, the demo didn’t give much context to the story either, ending with the character confronting a big ass dragon type creature, and it does make me wonder if there will be combat in Bound, and how that will play out.

But with a lack of nothing else really to say I guess I’ll reiterate that Bound was a genuine, pleasant surprise that looked and felt great, with an interesting ambiguity to it. Bound seems like a real gem and I implore you to keep your eyes peeled for it.