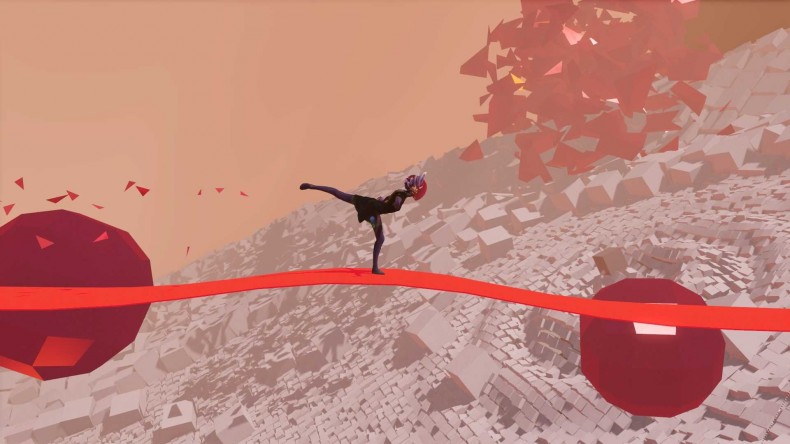 The subject matter of videogames is changing, and it could be said maturing, thanks to the likes of Gone Home and That Dragon, Cancer. But there’s an argument to be made that games like that are more art than game, more of a passive experience. While that’s fine, it’s not to everyone’s tastes – precious little is. Bound aims to marry a mature story with that of a platform game, and succeeds more often than it fails.

I’m hesitant to dive too deeply into what is going on, but interactive vignettes are played out filling in the blanks (though in truth, you’ll figure out what happened well before the final of the five levels on offer), but what really shines here is the mix of sound and visuals. Bound is a delight to view, with a living world that envelopes you as you prance around the colourful playground, geometry bending and breaking as you progress. It’s a world that is more fantastical than real, which makes narrative sense (though I can’t go in to why). The fire colours dance around your character as you pass through them, some friendly and others a violent force. This is a place that bends the rules as you know them, and one moment you’ll be walking through a door, then the next you’re upside down. Magic carpets will have you slide along them through the environment, giving you an alternative look at the place you’re traversing through. It’s magical to look at, but the opening piano chords strike the musical scene. If you know nothing about it, Bound’s soundtrack and opening moments let you know you’re in for an experience that aims to be emotional, and hopes to be memorable. The music throughout is exceptional, and it’s so well mixed that at times it feels as though you are making it happen. The bulk of your play will be as a female of unknown origin who interacts with her mother and raging aggressive beasts that pop up from time to time, giving manifest to dark things the story alludes to. It’s a shame some of the scene transitions are less than smooth, because it pulls you out of the immersion sometimes.

So it’s important that it looks and sounds good, because the movement is that of a ballet dancer. Her arms will be out to her sides as she walks or runs, and jumps are gymnastic leaps. Even walking along a tightrope against a wall will have her pirouette as she moves. This forms an important part of how you stay alive, because although there are pitfalls and badly timed jumps that might end you (briefly, death is rarely a punishment worth worrying about), the fire like red gas will attack you and bring you to your knees unless you dance to protect yourself.

Simply holding R2 and one of the face buttons will have you dance and create a makeshift shield that can see you through most dangerous spots, and is also how you finish each level, fighting off the darkness with dance before you escape on an automated end-of-level magic carpet. It sounds insane, but it’s mesmerising at times. What is here is a basic game, with rudimentary platforming and low (if any) peril progress slowing devices, but it’s elevated above average because of that audio and visual design. That’s not to say it’s mechanically bad, it’s more than competent as a platformer, but there are better examples out there. A speed-run mode unlocks which is interesting, because the five levels on offer can be played in any order, so the challenge for playing through quickly is to find the critical path, and indeed, the critical level order. On your first time through there are paths you can’t access, which change depending on the order you play the levels. It’s an interesting idea, but I suspect most people will see Bound as a one-and-done affair.

Although the story resonated with me, it’ll miss the mark with others. An interesting ending changes things up, but otherwise, within the first hour you’ll either be captivated or bored. It’s great to see developers being brave and trying to tell stories that aren’t generic, even if they do have their roots in the mundane everyday lives that we live. In that respect, Bound stands out from the crowd by tackling something you don’t see often in a game. A stunning visual aesthetic and gorgeous audio production, and a good game that doesn’t outstay its welcome, I enjoyed my fleeting time in this world, and I’ll return to it when it’s available with VR support later this year.

A decent platform elevated by stellar audio work, and a phenomenal artistic vision.