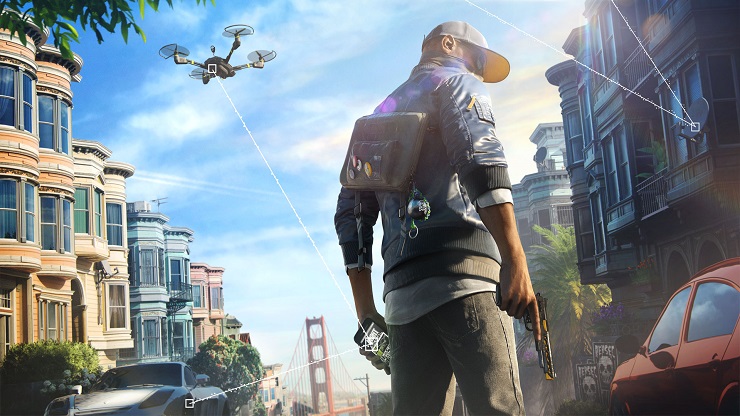 There was a moment where I thought Watch Dogs 2 might try and take things a bit too seriously again. After getting through the intro sequence I was let free into the world and given a ton of information about all the different missions I could partake in. One of these missions involved taking out the head of a pharmaceutical company who just so happened to have raised the price of a life saving drug by a few hundred percent and who was generally being a bit of a penis. Sound familiar?

The backstory and set up sounded a little too close to real life and a little bit like a serious matter, which made me worried that Watch Dogs 2 would be in the same vein as the first game, but instead of trying to force a serious story on you, it would tackle real world issues badly.

However, within thirty minutes I was driving a full-sized car that had a random LED equaliser on the back with a remote control, while Judas Priest’s Turbo Lover roared out of the headset. Police were chasing the car with no driver as fireworks followed my path and I hit some pretty impressive jumps. News crews came into report on it and one of my DEDSEC crew mates made a joke about hitting them where it gigahertz. Imagine Aiden Pearce doing that. While this was perhaps the most extreme story I could have chosen from my time with Watch Dogs 2 it is a good example of the tonal shift from the first game. I am yet to meet anyone who thought Aiden Pearce and his story with its serious tone was really good, but almost everyone I have spoken to who has played the sequel has said they quite like the world and the basic premise of the story.

The biggest issue I had with this side of things is that the core aim of Watch Dogs 2 is to gain followers, as in social media followers, which will apparently help you save the world. I’m still not entirely sure how that works, despite it being explained by my DEDSEC crew multiple times. However, it feels like it doesn’t really matter, as it’s just a device to let you lose and have fun in what has the potential to be a really great open world.

The quality of the San Fran bay area map in Watch Dogs 2 was hard to judge with just a few hours of play. Some areas seem unnecessarily far away from others, with massive bridges connecting the main areas. Getting on these bridges is a bad idea in a tense police chase, as it takes at least a minute if not more to cross and the cops are impossible to lose in a straight line. Other than that things seemed to flow quite well, with each area of the map feeling very different to others. What was clear, however, is that in the heavily populated areas, the city is genuinely impressive. This isn’t on the same level as GTA V’s Los Santos, but it’s probably the closest we have seen yet. Public areas, like parks, do feel quite real and people behave in realistic ways, going about their daily lives and in a lot of cases ignoring you unless you give them a reason to be suspicious.

Of course, Watch Dogs’ main selling point is the hacking systems and those too seemed to have been improved. No longer can you instantly escape any car chase by tapping the square button and it seems to be a less important aspect of the game than first time around. A few of the missions I played could have easily been done without any hacking whatsoever, which was a welcome change. Doing it that way would be a shame, because some the interactions you can create are genuinely entertaining.

More options for each device you can hack have been added, and even more devices can be hacked. You also have a handy RC car and quadcopter to help you out, meaning some missions can be completed without ever having to enter the restricted area that the thing you need will inevitably be in. Amazingly infiltrating these areas is actually quite fun, something only a handful of open world games have ever managed to accomplish. The stealth mechanics, while relatively simple, make sneaking around and staying undetected really quite fun, and the hacking creates ways to distract foes who just won’t budge. This could be one of the best stealth games released this year, outside of Dishonored of course.

I’m not the most imaginative person in the world, but even I managed to fool guards in a few interesting ways. Then there was that one time when I accidentally pressed the wrong button and sent a car reversing into two people, killing them both, when I just meant to explode a circuit box to move them away from a door. Oh well, shit happens.

Watch Dogs 2 has the potential to be fantastic, but it will live or die on its story and main missions. The ones I got to play were excellent and provided some memorable moments, but with a lot of hours to fill I worry things could become repetitive. If that doesn’t happen then I have faith that the story will be enough to carry everyone through with a lot of interest, but if the missions are poor, and I have to steal a car from a movie set every ten hours, then there could be issues. Fortunately the main cast of characters all have more personality in their little fingers than Aiden Pearce ever did.

Annoyingly I can’t quite put my finger on what Watch Dogs 2 is really like. It could quite easily be game of the year, but at the same time it could underwhelm, although I feel like the former is much more likely than the latter. What I do know is that this is probably the most fun I have had at a preview event all year. Despite playing for a solid three to four hours at 9am (which is early for me) I really didn’t want to stop playing, and had to be told multiple times to put down the controller.

I think that’s about as much of a ringing endorsement as I can give Watch Dogs 2, especially when you consider that I played the original for less time. I don’t want to count any chickens before they hatch, but my god, I really hope that Watch Dogs 2 builds on this great start and becomes something truly special.

Travel and/or accommodation was paid for by publisher.
Features, Previews
Ubisoftwatch dogs 2

eSports! I joined God is a Geek all the way back in September 2013 and since then have spent most of my time on Dota 2, and occasionally posting the odd review, news article or totally wrong predictions for The International. When I am not playing Dota I can probably be seen watching some kind of strange eSport or begging for more Twitter followers (@MikeStubbsy if you are interested). Aside from GiaG I am a computing student, football coach and major Apple fanboy.
MORE LIKE THIS
Ubisoftwatch dogs 2