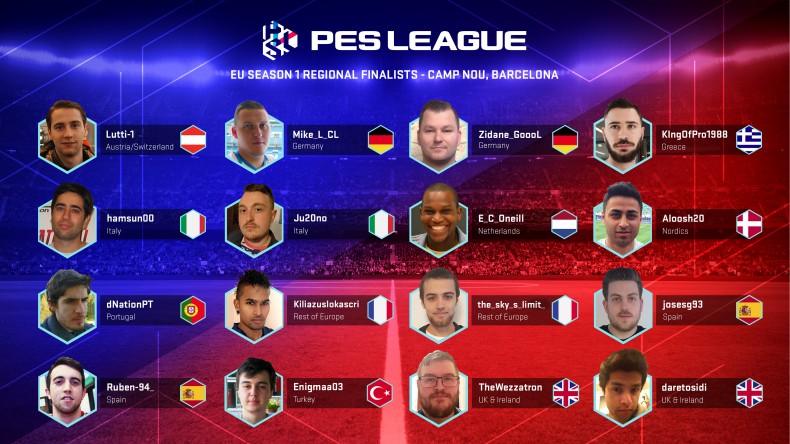 Konami have today revealed the 16 competitors taking part in the first European regional final of the PES Road to Cardiff competition this week, on February 11, along with some details about the contest.

The qualifying players were selected through a rigorous bought of online matches against their peers over a 21 day period with each participating contestants 15 best results then colated and tabulated to determine the top 16 among them. These victors will now be heading to FC Barcelona’s Camp Nou to further narrow their numbers down to four through a series of knockout matches with a $20,000 cash prize up for grabs on the day.

“The standards of this year’s Official PES LEAGUE is proving incredibly high, and the skill of those that have made it this far is breath-taking,” commented Jonas Lygaard, Senior Director – Brand & Business Development for Konami Digital Entertainment B.V. “The strength of those heading to Camp Nou for the first Regional Final is certain to guarantee a tight battle for the first places at the Grand Final. We wish all those heading to Barcelona the very best of luck.”

The four best players at each regional final will then take part in the grand finals in Cardiff this June where the winner will receive the main prize of $200,000. PES League Road to Cardiff season 2 will take place from February 23 to March 23 from which a further 16 players will be chosen for the second set of regional finals.