Anki Overdrive is the hi-tech Scalextric I always dreamed of 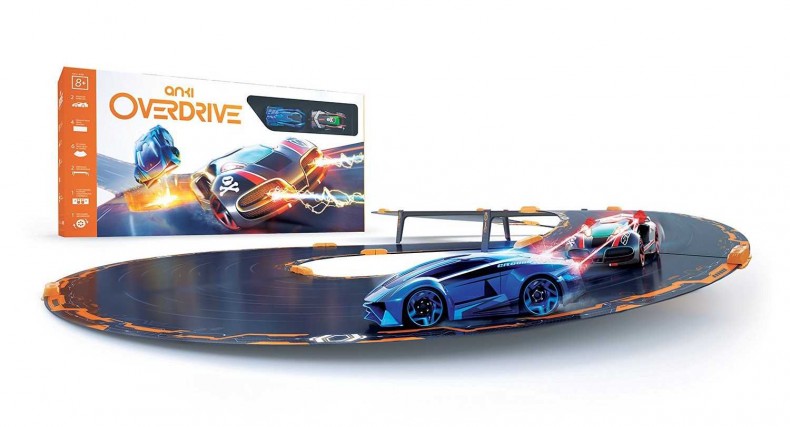 Some things just hit that nostalgia button, don’t they? For me, playing Super Mario World or Sonic 2 takes me back to being a kid. Final Fantasy VII is another, to entire evenings (lots of them) spent completing that game over and over. I wouldn’t say my family were particularly well off, growing up. I was the kid who had the remote control car on a wire, if that tells you anything. My parents worked, and they never let me down, but I wouldn’t say that I was cutting edge when it came to cool stuff. I was also the kid who had a second hand Scalextric set that had half the cars broken.

So unboxing the Anki Overdrive, along with the extra track pieces sent by the lovely folks at Anki brought mixed feelings for me. Firstly, excitement, because I love getting things in the post for work that I can involve my kids in. Secondly, a strange nervous feeling, because for once I have the cool version of something, and I wanted it to be good. Thankfully, it’s ace, and feels like the hi-tech Scalextric set I always dreamed of.

Setting it up is pretty easy, physically, anyway. The tracks magnetically snap together and you can put them together in any sequence you see fit. Additional track items (we were sent some) allow you to make longer tracks, raise bits of track up, and even created a highway style intersection that can cause crashes. In the core box, though, you get enough to make a reasonably large size track, and one that easily filled the floor of our modest lounge. Included in the box is a charger for the cars: they just slot in and an incredibly bright green light indicates they’re ready. The harder part is connecting your iPad/iOS/smart device to them via Bluetooth. I say hard, it’s not particularly difficult, but the tutorial is a little bit over the top, and feels aimed at very young children. Mine are old enough that we all just wanted to get into the action, so be prepared to spend a little bit of time being taught to suck eggs.

The thing is, this is more than just a car racing thing. Each car has certain skills, or weapons, and they can be used to slow your opponent down. The easiest example is that one car can magnetise its opponent and pull them to a screeching halt for a brief moment, allowing you to overtake. You can set how many laps you want to race, and customise the races enough that you’ll be happy whatever you get.

But the overall feeling I am left with is that this thing is cool. The cars are seemingly locked on the track by magnets, but tilting your controller (smart device) lets you change lane, while there are on-screen buttons and sliders for weapons and speed respectively. It’s hard not to get lost in the child like wonder of the cars whizzing round the track, and as they spin off due to a crash or taking a corner at breakneck speed, watching them try to course correct, like some weird alien AI attempting to pathfind back to its course.

This was my Sunday morning. pic.twitter.com/oMnNXK4889

And that’s Anki Overdrive in a nutshell, really. It’s a cool toy that incorporates modern videogaming via (in our case) an iPad and iPhone. It’s real life multiplayer using videogame logic. It’s fun, but it’s also fairly expensive, just like a good Scalextric set was. I’ve enjoyed being cool dad for a bit, and the best bit was seeing my eldest (who I’d thought had long outgrown this kind of thing) getting involved. We cover a lot of games here, and a lot of posh, expensive looking tech, but it’s kind of cool to be physically interacting with something old made new again, yet thanks to a tablet or phone, involving everyone.

It may be too expensive for some, but it’s worth considering, purely because it took me back to a child-like state, away from notifications and work. Anki Overdrive is a good time, and something I thought was gone for good, back to life. That’s pretty cool.

Support us on Patreon for $1 a month to see the video for this article.

Editor-in-Chief here at GodisaGeek, I organise almost every bit of content as well as running our weekly Podcast, and being the lead producer on our YouTube Channel. That means I'm very busy and sometimes grumpy. Yay!
MORE LIKE THIS
Anki Overdrive

ANKI Overdrive: Fast & Furious edition will be available in the UK from tomorrow