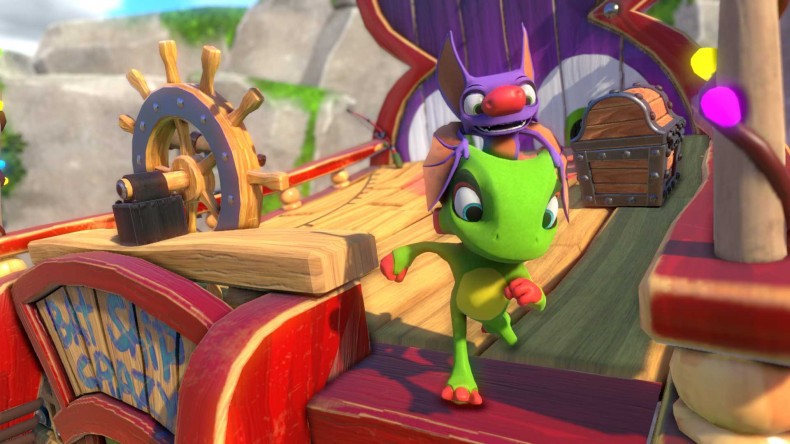 We recently had the joy of talking to Steve Mayles, Character Artist on Yooka-Laylee and Rare alum. It was a great opportunity to ask about the opportunities the Kickstarter gave the team, life after Rare, and how influences from the past played a role in shaping their future.

How did development of Yooka start?

We made Banjo Kazooie at Rare and a lot of the people at Playtonic are those people. We never got the opportunity after the second Banjo to make another game. Rare’s changed direction now, and so they don’t really make those games anymore. There was a group of us that were really passionate about making this type of game. So that’s what led to the formation of Playtonic, specifically to make Banjo Kazooie’s spiritual successor. That’s what Yooka-Laylee is.

So you wanted to do it, just the opportunity never came up?

I don’t think people were approaching management every day saying “Let’s do another Banjo, let’s do another Banjo!” I think there was just generally a feeling amongst some of the original people that we always wanted to make that sort of game, but we weren’t going to get the chance to do it anymore, unless we set everything up ourselves. So that’s what we did. We could be seeing a comeback for the genre, with A Hat In Time, Crash Bandicoot Remastered and Yooka-Laylee. Why do you think this style of game died off?

I think the market got very saturated in the late 90s with 3D stuff. As soon as we could do 3D, a lot of people did those sort of free-roaming open world platformers. There was a lot of them about. I think people got a little bit fed up with them. And also with the new technology coming in, new hardware that can do better graphics, people were eager to show that off – developers were eager to show that off – with a more realistic product that didn’t really fit in the cartoony world of the 3D platformer. For us, absence makes the heart grow fonder. If we tried this 10 years ago, we wouldn’t have got the response. But there has been that gap for so long that people have been crying out for another 3D platformer.

The Kickstarter was a huge success but was there any apprehension before launching it?

Yeah, of course. Yeah. We thought we’d be okay but we didn’t know the Kickstarter would do as well as it did. Absolutely not. But as soon as Playtonic started, even before we said we’d do the Kickstarter, we had so many emails just come through saying good luck guys, saying this, that and the other. It was so heart-warming. What has Team17 coming on board enabled you to do that the Kickstarter campaign by itself didn’t?

It’s just enabled us to make the game we wanted to make at the start. We started with six… seven people at the start. Even though we were planning to make a very polished, small game, with the amount of money we got and with Team17 on board to take away the conversions for the different platforms, a lot of the marketing stuff and business side of stuff, it’s enabled us to expand and make the game we really wanted, in terms of scope. It has turned into a much bigger game than we initially thought it would be at the start. Definitely.

Were there any ideas from the Banjo era that you held onto and have been able to implement in Yooka?

Not really. I thought as we were making it we’d be referencing Banjo a lot more. Loading up the Nintendo 64 and saying “what did Banjo do?” We did surprisingly little of that. I think there was one occasion I remember where we said oh, I’m not quite sure about the movement of the main character. What did Banjo do? But we didn’t really do much of that. I think when you start developing and the game starts becoming its own thing a bit more and you have different moves coming, then… yeah, I didn’t think we needed to reference it as much as I thought we would.

You have the hardcore Rare fanbase who have been crying out for this game for ages and at the same time, you want to make Yooka its own thing. Was it difficult to strike a balance between the two? Making a new game while referencing the past?

Yeah, we were very conscious of that. Especially as we had 80,000 backers to please on Kickstarter and they’re expecting the Banjo Kazooie spiritual successor. You tread a fine line between ticking the Banjo checkboxes and then, on the other hand, you want to modernise the genre as well. We’ve tried to do that with things like the expandable worlds, learning moves in any order, and the power-ups with the tonics. Do you think free-roaming open world platformers could make a comeback?

I don’t see why not. I think a lot of people will be looking very closely at the Yooka-Laylee sales. I’m sure the Kickstarter piqued the interest of a lot of companies. A lot of companies thinking yeah, we’ll keep an eye on that. Yeah, I don’t see why not. Speaking of the success of A Hat In Time, we looked at that when we were thinking about, you know, can we make a success of Playtonic with a 3D platformer? And we looked at A Hat In Time. So we already have a few reference points as Kickstarter successes that made us think yeah, we can do this.

A Hat In Time is the game that made me think, I actually miss those kind of games. You know what sold me on it? The running animation. It made me realise I miss games with that sort of personality.

[Laughs] Yeah, that’s it! It’s a great genre to work in as a character artist. You can come up with any manner of bizarre characters doing funny little animations. It’s just a joy because nothing is serious. It’s all about fun. With Yooka-Laylee having started as a Kickstarter project, was there more freedom in development compared to previous games?

I think we tried to get back to a way of working that aped the Banjo Kazooie days. In those days, we did have just as much freedom as we have on this. The teams making games at Rare, say they were five different games in production, they’re almost like little companies in themselves. We never looked outside of our own team. So it’s been very similar. we’ve tried to take the best bits of working in that environment and add in a few more new thinking practices. Just to cope with the extra size of the game and the way you need more assets to build the game, you just need to manage it a little bit better. The reason I ask that is the plot of the game seems critical of middle management – Capital B making ridiculous demands of his staff, the references to focus testing…

So I was wondering if that was any reflection on previous experience?

Not really. I think they’re just light-hearted comments about business in general. We’re never trying to have a dig at any previous employers or anything like that. It’s just all a bit of fun.

Looking ahead, would you want to carry on with 3D platformers or try something else after Yooka?

We get lots of messages from the fans saying what are you doing next? I think you should a Diddy Kong Racing, Yooka-Laylee or Jet Force Gemini-type game or a GoldenEye-type game! Rare was famous for doing lots of different genres, mainly because the teams were all made up of different people. So I think, sorry for the cliché, I think the world is our oyster. Because we can choose. There’s no-one telling us ‘you’re going to do this next’. We can choose exactly what we want to do and it’s usually led by what people in the company really enjoy playing or if we think there’s a particular gap in the market. We’re trying to rely, on the business side, is there a gap? Plus do we really want to make this game? If you’re working on a game you really enjoy playing, you’ll make a better product.