Interview with Pete Bottomley, Game Designer and Narrative on The Occupation 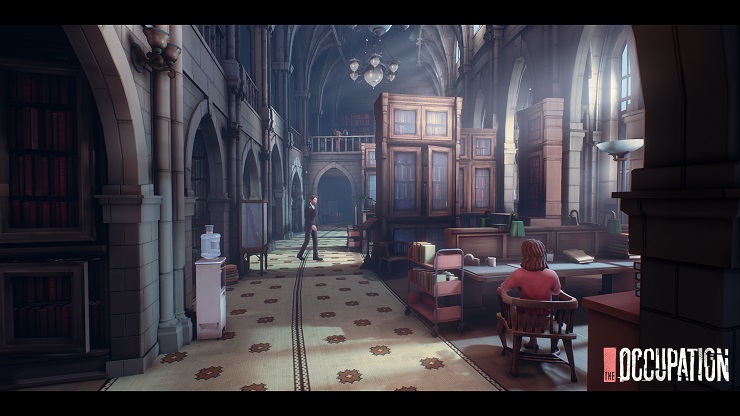 For those of you who enjoy the first-person narrative genre, you’re probably paying close attention to the recently announced game from Manchester-based developers, White Paper Games. Set in North-West England the 1980s, The Occupation sees you play as a whistleblowing journalist after a controversial act is passed by the government, following the events of a terrorist attack that leaves 23 people dead.

I was lucky enough to speak to Pete Bottomley, Co-founder of White Paper Games recently, to talk about the newly announced game, and his work as Game Designer and Narrative on The Occupation. Not only is it a new direction for the team, the real time narrative mechanic seems very interesting, and I was very keen to learn more about it.

First off, I asked about the origins for the idea, and how the project came to be. “We wanted a strong narrative direction, and we want to tell a story that’s interesting to us. In Ether we had mental illness. We had people in our families working in the medical profession. Things around us influence us. Right now, and it’s been the same for a few years, there’s been an atmosphere in the air – very politically driven and something that wasn’t previously there before.”

“We’re not trying to push a political agenda with this game – it’s not about our views or imposing them on you. It’s more about the grey and moral lines. We’re hoping to present the player with a person that’s done something morally bad that they should’ve done, but making you almost empathise with that, and seeing where it came from in the first place. Obviously it’s very current in a terrible way right now and those kinds of incidents have made us reflect on what we’re doing this week”. The four hour narrative mechanic is something quite unique in the first person narrative. I was curious how it was actually going to work in-game, and whether it’d be based on dialogue options or the player’s actions. “It’s definitely more focused on player action and interaction as opposed to branching dialogue options. People have asked how do you get this game to progress – how do you hit the main beats or choke points, or if I go and sit on this bench over here, will the game just keep going? Yes, you could just go outside into this courtyard environment with pigeons around; you can overhear conversations around you and just watch the world go by. You will have a narrative outcome that reflects your inaction in the game. It’s almost like a reflection on everyday life – all these things are happening and people just let it pass by, and you don’t do anything about that”.

“And that’s fine. If you just want to take in the world, a waterfall – the ambience, that’s fine. You will have a narrative experience from that. We kind of just let the game keep going, and we’ve fit in these narrative beats. The main difference between the occupation and Ether One is – in Ether, you had the option of additional puzzle solving, but with this game, we’ve been heavily inspired by the immersive sim genre like Deus Ex. Obviously we don’t make heavy combat RPG games, so it’s taken the core elements of basic systems interacting with each other to create interesting outcomes”.

It sounds like something unlike anything I’ve played before, and the way the NPCs around you will act further establishes this. “Characters are in this world, and they all have jobs and motivations – they all have a purpose. They’ll be going about their life and have internal simulated stats. If they’re getting stressed out, they’ll go outside for a cigarette, or if they get thirsty they’ll go and get a glass of water or a coffee – it’s the world moving on around you”.

I wanted to know more about the setting, and what role did the player have in The Occupation? “In this setting, an act has been passed on this day, and it’s a reflection on the Patriot Act in America. It’s an act that’s trying to impose immigration laws – about wanting to make private information public to governments, and it’s your job if you disagree with that, to use methods to get information by overhearing conversations and getting information that you shouldn’t have and make it public like a whistleblower, similar to the Edward Snowden whistleblowing case – which was heavily inspirational”. “We didn’t want it to be linear. You always hear about non-linear levels in games at the moment. We just wanted to make a game you’re free to explore, in a similar way to Ether where you can chip away at the narrative threads and piece together what’s going on”.

Pete mentioned about the Edward Snowden case being influential in The Occupation’s conception, but what about stylistically? “I think it’s a natural progression from Ether. We were very constrained with making things low poly and having a certain style. OJ, our artist, and we’ve now got Scott on board who’s like, “where’s the natural progression from where that art style left off?” We’re still a small team, we still have limitations, but we wanted a more rich and interactive world, so where is that kind of mid ground? We were very influenced by colour. We wanted to push colour as it plays a huge role in this game. Inspiration wise, I’m not sure there was one thing, but we were looking at a lot of different cinematography – we just needed a richly populated world”.

“Again, we wanted tonnes of environmental storytelling. We wanted to go in a room and see all the things that had happened there; that’s a thing I think we did really well with in Ether. You’d go into a house and pick up this note, and get a feel for the people that lived there”.

One of the best achievements in Ether One was the voice acting, namely that of Elspeth Edmonds who played Jean, and Ben Britton who played Jim. Were they coming back for The Occupation? “100%. They make us look better than we are. Their voice acting is incredible. I was just saying to them the other day when the trailer dropped how we couldn’t make another game without them. For this game, we made specific characters for them. Elspeth’s character is more an AI voice in the world and you don’t see a 3D representation of her, but she is a supporting role. Ben’s voice is a security guard, and you might see him walking past a window or shining his torch – that’s Ben’s character. He’s a part-time guard and his brother’s got him a job in this government facility, who’s a member of the government. He’s a part-time actor, and he’s walking round practicing his lines – just joking. Ben’s just perfect for this role. We have this heavy subject matter in the world, and you need this light relief in this kind of environment”.

For all of White Paper Games updates, you can check out their development blog, where they’ll be posting updates on the development of The Occupation. It’s certainly looking like a very promising title, and one you may not have on your radar, but hopefully after reading this interview, you’ll be paying a closer eye on it.

Video games are cool. Don't let anybody tell you any different.
MORE LIKE THIS
InterviewThe OccupationWhite Paper Games

Mortal Kombat 11 is “the biggest story mode we’ve ever done”: an interview with NetherRealm’s Matt Burke
Support us on Patreon for exclusive content