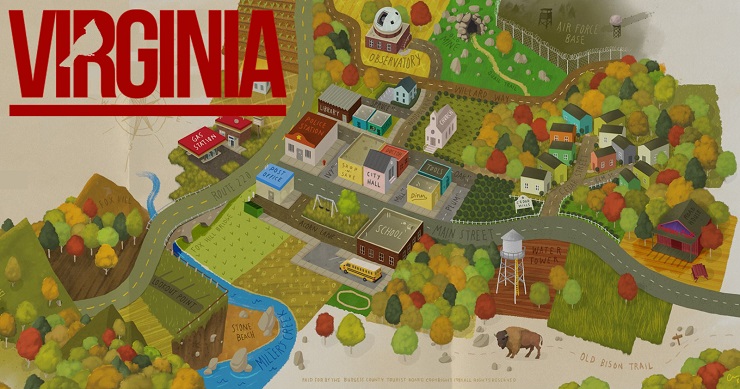 Last night, Variable State’s narrative masterpiece won a BAFTA for best music, and rightly so. A little before this, I got a chance to talk to the composer behind the music about how Virginia was his first project after coming out of film school, and how he’s determined to beat Dark Souls 3 (one day).

I was curious as to how Lyndon came to work on Virginia. “So, if you go back to March 2014, I’d graduated from a film school outside of London called the National Television School. I’d been there for two years studying and not working. I originally wanted to work in film, but the film school there had a game department, so I considered it. I’d always been a gamer, at least when i was younger, and I’d just worked on some interesting things with interactive music. When i graduated i wanted to work on games. I went on internet forums to see if i could hook up with some guys to work on something new. I saw an advertisement from Jonathan and Terry of Variable State to go and work on a game right up my alley; they were talking about Twin Peaks and X-Files, which was perfect as I’d just watched Twin Peaks for the first time. They’d decided early on the game would feature no dialogue so they wanted to rely on the music. I’d just come out of learning about using music for storytelling, so i just felt this was exactly the sort of music i wanted to do for video games”.

It amazed me this was Lyndon’s first project after studying. “Yeah, I worked on other games that started after Virginia and finished before,, but this was my main project”. With it being the first project, and having no real experience writing for videogames, where do you even start to score something like Virginia? “I did some music on the demo. We didn’t have a story when working on the demo – we had characters we liked and the relationships we wanted, but re-wrote the story after EGX 2014 when we were working on a pitch for the game”. I didn’t realise Lyndon played a role in co-writing the story for Virginia either. “I was involved in writing the story which i co-wrote with Jonathan and Terry. No-one had to sell the game to me; we had an Excel spreadsheet which we could all add to, and it was separated into a scene – each time the game cuts, there would be a different cell. We’d separate into days so you could see how the story was progressing. I marked that up – it’d be colour coordinated and would decide when certain beats would separate emotional cues, and decide what themes we might need for the music to rise at that point. We did the whole story like that. I started to write music away from anything, then we’d have to figure out how the music would fit into the game later on”.

One of the best tracks on the soundtrack was Roadhouse, and it forms part of the most moving scenes in the game. Being in love with the song, I was fortunate to find out a bit more about it, and how it came to be. “That is one of the pieces of music that survived the demo, in a basic form. The demo ended in this roadhouse bar. We had a similar scene where you pull up to the bar, with this flashback that wasn’t in the final game. We wanted to create this magic moment, where this music would play that wouldn’t fit in this county bar setting. We were very inspired by David Lynch, and having this angelic song and no-one appreciates it”.

“We embellished it quite a bit. It’s reminiscent quite a bit from Twin Peaks. When we got the opportunity to work with the Prague Orchestra, we thought we should just go for it. What I wanted to do after I knew the score would be lead by an orchestra was go outside of this band setting to really sell this idea of transcending the setting and sell the emotion. Let the music fade away into this classical arrangement. It’s probably the most hopeful music in the game”. I was curious whether Lyndon had any inspirations or styles of music he really loved. “The game was set in the 90s and I love movies in the 90s. I was looking at film soundtracks like James Newton Howard’s score to The Fugitive and Outbreak. They’re not widely known for their scores, but they both use synthesizers along with the orchestra. There’s been a renaissance now of using a John Carpenteresque sound – you hear it in Nicholas Winding Refn films now. I was thinking what about the films that bridged those two elements of old school synth and orchestra. I thought Virginia was a project that could use this”.

It was interesting to know Lyndon’s dream projects aren’t too far from what he’s already done. “I’d definitely continue working on narrative games like Virginia. What’d be amazing would be to go to town with the interactive music side; there is this in Virginia, but its all in that direction – you always no which way its going in”. Finally, what kind of games keep the Virginia composer busy when not writing music for games? “I really liked Hyper Light Drifter, The Witness – Uncharted 4 was great, too. I’m still half way through Dark Souls 3. I understand the love for it, and i really love that. I try to play indie games because they’re much shorter and I can complete them; I always feel ashamed to not complete something, and Dark Souls 3 is a long game, but I’m determined to finish it”.

It was a real pleasure to chat with Lyndon Holland, and it’s great that Virginia was recognised by BAFTA Games for its music. The game is available on PlayStation 4, Xbox One, and PC.

Spring has sprung for the Yu-Gi-Oh! Trading Card Game