The real life abandoned asylum of The Town of Light 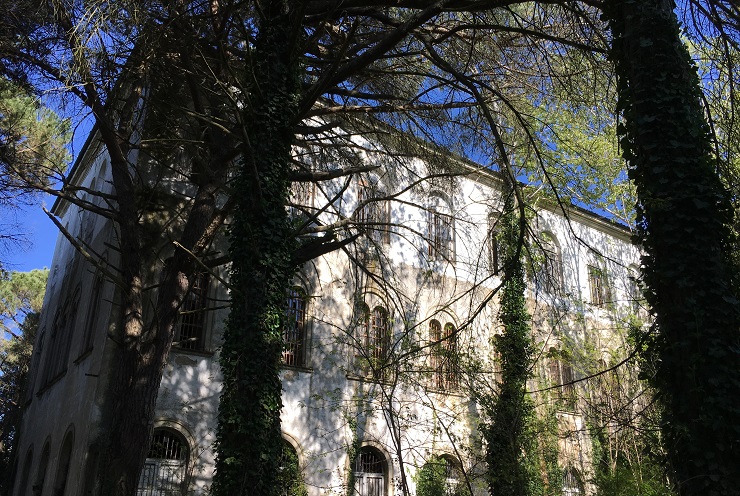 Some video game developers strive for creation, creating their own weird and mystical world solely from the depths of their combined imaginations. Cities, nations, planets and entire galaxies have all been thought up in heads and created with code to give us some of the best games ever played. And some video game developers go down a different route: they strive to recreate. Some will take inspiration from the world that’s still standing or the world that can be found in history books, and will use it to create their own pastiches on urban sprawls or to digitally retell a historic event. Not many, however, base their entire game on one single abandoned building, which stands alone on top of yet another sunny hill in the middle of Tuscany.

Volterra Lunatic Asylum, just outside the small Italian town of Volterra, was shutdown in 1979 after widespread law changes in Italy saw the closure of similar such establishments throughout the nation. Since then the main building of the asylum along with several different pavilions that made up the “town within a town” stood empty baking in the sun, as the walls rotted, glass smashed and roofs fell in. Usually only visited by the adventurous and rebellious, those who seeked a spooky night out or wanted a wall that no one would mind if graffiti was scrawled on. This haunting and foreboding building, that was once home to over 6,000 patients, is the setting of LKA’s narratively focused title: The Town of Light. If the name rings a bell that’s because The Town of Light was actually released on PC over a year ago, with our review calling it “a testament to a company that wants to use video games as a tool of education and provide awareness to an often ignored subject.” – and that it certainly does.

In anticipation for The Town of Light soon coming to consoles, I was lucky enough to be taken to the asylum and walk through its dilapidated halls, climb its crumbling staircase and walk around its wild and unruly gardens. Aside from rusting boilers and broken toilets, the rooms of the asylum are now empty and if you didn’t know what you were in you probably wouldn’t be able to tell. Yet still the building has a strange aura to it, oppressive. I imagine, though it is not quite to the same degree, that walking around Auschwitz would evoke a similar sombre feeling, just knowing the suffering that went on within the walls. Not many of the patients who were ever admitted to the asylum were ever released again, and fewer escaped. Al Hibbered, of The Town of Light publishers, Wired Productions, said that when he first visited the asylum it had a “deep impact” on him and he explained to us how the asylum had its own economy and how the patients carved out their own lives for themselves.

The patients who were deemed healthy and safe enough were allowed to work and earn the asylums own currency. They could work on the farms that the asylum owners, or in the butchers (which had been converted into the hotel we were staying in) which produced the food for the asylum or make coffins and straightjackets for their fellow inmates. They had football teams, made art and even put on plays, “it’s testament to the human spirit that they were still able to carve out their own lives despite their predicament,” Hibberd said as we looked over photos of performances in the town’s museum. When the asylum was closed, some patients refused to leave as inside the walls they had a life and stability. Those who weren’t deemed healthy could expect electrotherapy, were left in dark isolation or tied to their beds swimming in their own excrement for days. An environment in which nurses and carers didn’t have the knowledge or comprehension to understand what was wrong with the people they were looking after and poor pay led to frustration and inevitably abuse.

This is the story The Town of Light tells, one about suffering, abuse and mental health. It’s told in an abstract, time bending way and I don’t want to delve into spoilers, but you start in the game in the modern day, exploring the expertly recreated asylum – from which windows are bricked up to the patterns made by the flaking plaster – as the story of Renée, a 16-year old girl who has been admitted to the asylum in 1938, is slowly revealed. Renée herself is fictional, but the things that happened to her very much happened to others and are a results of hours and hours of research about people’s experiences not only in Volterra, but in Asylums throughout Italy. It may be first person and present itself as a horror game, but don’t expect jump scares. What scares you here is knowing that these things are real and the ever building sense of dread and oppressiveness which comes with that knowledge – which closely replicates my own time visiting the asylum.

One thing that every patient Ospedale Psichiatrico di Volterra suffered, no matter their actual condition or what they were admitted for (which, of course, was on occasion for horrifying reasons, such as being gay) was the loss of identity. All possessions and clothing were stripped away and they ceased to be human and became a patient. Angello Lippi is a joyous elderly gentlemen who sits through every interview with a big smile on his face; he used to work in the asylum way back when as a social worker. He says that he “tried to make them remember who they were before. How they lived, what they liked, what they wore”.

Even though he says he’s too old for videogames himself and that it even hurts to play them, he likes that the story of Volterra is being told via the medium as it will let people experience for themselves what those people went through and, hopefully, it will get through to the younger generation. When asked what message he wanted people to take away from playing the game he replied, with the same smile: “Learn to recognise the person and not the illness.”

Article based on a trip to Italy, the publisher paid for travel and accommodation.
Liked it? Take a second to support GodisaGeek.com on Patreon!

The Town of Light: Deluxe Edition heads to the Nintendo Switch this Spring

Competition: Win a copy of The Town of Light and Victor Vran on the platform of your choice

The Town of Light coming to PS4 and Xbox One