previous
Podcast: Geek of Thrones Season Two #5 – Eastwatch (S7E05)
random
next
Two top DJs to fight it out on Injustice 2 at Gamescom for charity
0 comments 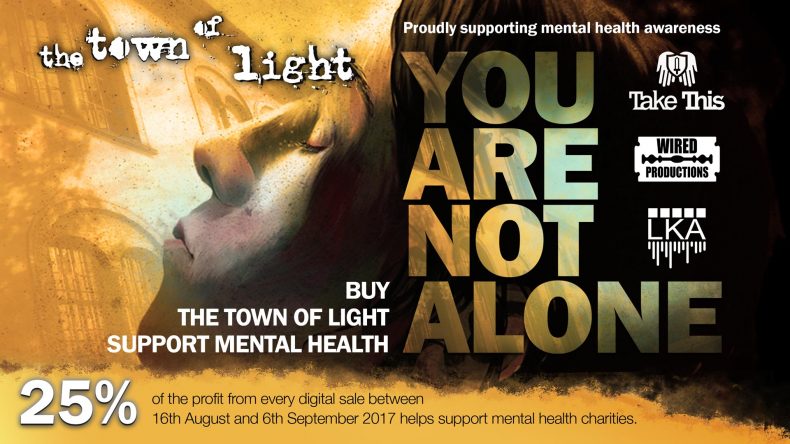 Wired Productions announced the start of a year long campaign for donating profits to charity.

The first segment will have 25% of the profits from The Town of Light will be put into a new fund for Mental Health. The Town of Light sales across digital platforms from August 16 until September 6 will be included here. Charities will include Take This, Inc. More activities will be announced as the campaign progresses. Leo Zullo, Managing Director of Wired Productions commented on the campaign:

“The Town of Light, because of the themes of mental health within the game and its grounding in reality, starts the conversation. Our duty is to stand together and continue that conversation, not only to ensure that we dispel the stigma around mental health, but also to ensure that those who feel alone know that they are not, and are given the help they often desperately need. This promotion, alongside our extended campaign for awareness, forms only a small part of a much greater picture, but we hope they will touch many lives.”

This campaign sees the game itself discounted by 20% and you can buy it on Xbox, PlayStation Store, GamesPlanet, Humble Bundle, or Steam to support the cause.

Out of the mentioned storefronts, GamesPlanet is going the extra mile by donating all their profits from these sales to the cause.

The Town of Light is available on PlayStation 4, Xbox One, and PC.