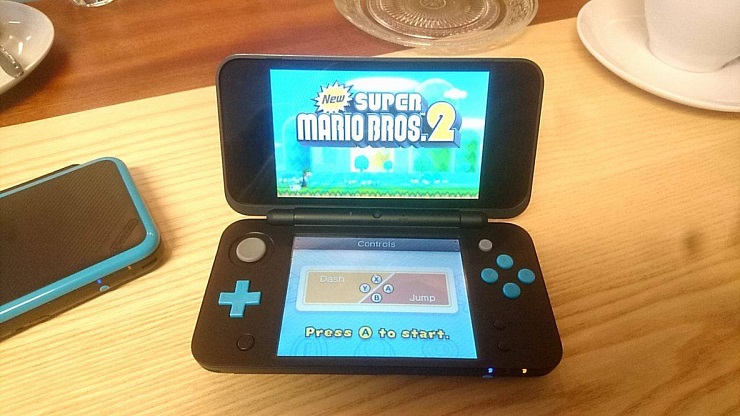 It’s yet another iteration of Nintendo’s long 3DS/2DS line and yes, like the others that have been released, this will likely be the best one yet.

If you haven’t been keeping track, or you can’t be bothered checking Wikipedia, here’s how the evolution of Nintendo’s handheld has gone thus far. There was 3DS. Then Nintendo made the screen bigger with 3DS XL. Then came 2DS, which was shaped like a slice of toast and dropped the 3D aspect. Then came New 3DS and New 3DS XL, which improved upon the tech of the original 3DS, and now we have New 2DS XL.

So this essentially blends the best of 2DS and New 3DS together, while solving “should I get 2DS or New 3DS?” pondering in one fell swoop.

God is a Geek was invited to try New 2DS XL and go hands on with it. But how do you go hands on with something that… well, that already exists? It’s a design we already know and love, it’s just been slightly tweaked. How do you review something like that? What do people do? The room was full of other journalists picking up New 2DS XL and frowning at it, peeking underneath and studying it from all sorts of angles, while silently nodding to themselves. What secrets did they know? What were they looking for? What pleased the silent guardians of the industry?

One journalist pulled out his giga-expensive DSLR camera and rushed his New 2DS XL next to a window, so he could snap shots of it in natural light. I had no idea what to do with mine, so I stacked some units up and took a picture of them next to a banana.

“What are you doing?” asked one journo, looking at the banana.

“But all bananas are different sizes,” he replied.

Then we looked at each other in awkward silence until he went back to New 2DS XL, examining it like it was alien tech that had quantum-leaped into our world from another galaxy.

So here’s a stack of New 2DS XL units next to a banana.

It’s for scale, you see.

Obvious point #1: Nintendo has reverted to the clam shell design for New 2DS XL. Probably a good thing because the toast-shape design of 2DS was mocked as much as it was loved and everyone loves the clam shell design. It fits snugly in your hands too, as even in its New 2DS XL form, it’s still slimmer and trimmer than New 3DS XL.

Obvious point #2: The game cartridges now fit in a slot tucked away at the bottom of the hardware, under a flap. This supposedly eliminates the risk of any cartridges accidentally being knocked out should you pull your 3DS out of your pocket with haste. But has anyone ever pulled their 3DS out of their pocket with haste? No, me neither. But hey! Problem solved, if you were one of those clumsy people acting in haste.

Obvious point #3: The screens are significantly bigger than they were on 2DS, solving one of that iteration’s main problems.

Obvious point #4: The LED display for street pass notifications and power is now located on an extra bit of plastic that runs across the top of the unit when the device is closed.

Not-so-obvious point #5: It’s really light. This is impressive and I know it’s impressive because the other game journos in the room put the New 2DS XL in the palm of their hand and lifted it up and down as though weighing it. “Ooooh, isn’t it light?” they’d coo, staring at each other in wonder. Yes. Yes, it is.

Three games are being cued up for launch alongside New 2DS XL – Hey! Pikmin, Dr. Kawashima’s Brain Training – Can You Stay Focused? and Miitopia. We got to try out those games plus a fourth, Ever Oasis, which is out on June 23rd. It’s both a huge oversimplification and entirely fair to say Hey! Pikmin is Pikmin in 2D.

What’s fun about Pikmin on the small screen is throwing them means tapping the screen where you want to throw them. There’s a nice rhythmic ‘taptaptaptaptap’ as you play, launching the different coloured Pikmin around to do your bidding.

The 2D focus means there’s a new verticality the series hasn’t explored before. Olimar can use a jetpack to boost into the air, for example, and the levels stretch high enough that you’ll have to throw Pikmin up into the second screen.

Throw in secret areas, funny Pikmin cutscenes as you adventure on and treasure on each level to collect and you have a game that feels like it’s distilled the essence of Pikmin into its purest form.

Lots of fun and the perfect introduction to the strange little critters if you’ve never played Pikmin before. The answer to the question asked in the game’s title is no. It’s 2017. No-one can stay focused on anything these days, unless it’s focusing on endlessly rotating between three different social media apps while occasionally burping toxic clouds of Dorito and Red Bull fumes as Generic Marvel Netflix Show plays in the background.

But if there’s a game that can prove how much our collective focus is lacking, it’s this one. There was only one mini-game available at this early stage, called 1-Back. The idea is that maths questions appear, such as 9-6, and when the next one appears you have to solve what 9-6 was before solving the new one. And so on and so on.

The next level after that is called 2-Back (where you had to recall answers to two previous questions rather than just one), and then there’s 3-Back (self-explanatory and also impossible unless you’re a genius).

Fun fact about Can You Stay Focused? – it really, really does force you to focus. Which isn’t a fact, it’s more of an opinion. And it wasn’t that fun either. So it wasn’t a fun fact at all. What was the point of this. I can’t remember. Focusing is bloody hard.

As an aside, you can tell someone on the development team realised the previous Brain Training games were a bit sterile, because now Dr. Kawashima has devil horns, red skin and shouts a bit. It’s received a general injection of personality and fun, helping lift the entire game a little.

It’ll be good fun, this, even if it does make you feel like a bit of an ADHD plonker. This is a light, frothy RPG that puts your Miis at the front and centre of the action. You have to save the faces of Miitopia by venturing forth with your army of Miis and slaying whatever creatures are in your way. You can even put your Miis forward in their own adventure, which is filmed like a movie and lets you take screenshots as the action rumbles onward.

Miitopia has a self-awareness that allows it to be stupid, silly and poke fun at itself. One quick example: when selecting your classes, you can pick the usual (Cleric, Warrior, etc) or something ridiculous (Pop Star, Cat, etc). Pick Pop Star and your Mii will spin around and croon “Huuuuun!” before attacking.

You’ll need to feed your Miis, sort them out with equipment, and, ahem, decide their sleeping arrangements. The humour is surprisingly knowing and on point, especially given the Tomodachi Life controversy way back when.

It’s not an RPG that will have you rooting around menus optimising your best equipment for hours, but it’s not designed with that in mind. Miitopia is a bit of slapstick fun starring your Miis in an RPG framework. Nothing more, nothing less. It won’t get you to reach into the deep, dark depths of GameFAQs looking for a guide but it will definitely make you laugh. It’ll broadly be split into town management and adventuring.

Town management is looking after your oasis. You have to complete tasks for the visiting NPCs there, grow shops, upgrade the shops, planting seeds in the garden, and so on. The larger your oasis becomes, the more likely it is to attract visitors, who can be convinced to move in and then become playable characters for the adventuring.

The adventuring is Action Adventure 101 – light attack, heavy attack, lock-on, dodge, each character having their own special ability. One cool thing about Ever Oasis is how you can interact with the world around you with those unique abilities. Roto can roll into a ball and bounce off the environment and you can change the angles he bounces at by using a character with a spear to shift debris around.

Ever Oasis won’t be released at the same time as the previous three, but beforehand, on June 23rd.. Either way, all four titles make a great addition to the huge 3DS library and help make New 2DS XL even more appealing when it launches on July 28th.