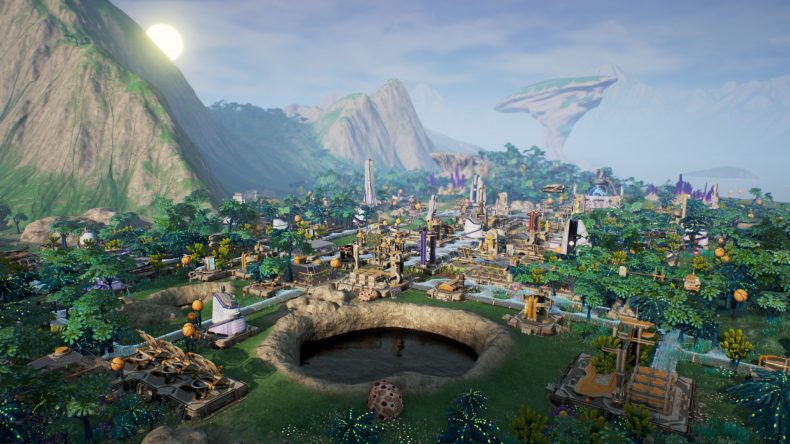 Aven Colony is a city builder, SimCity in space if you will, but the focus is very much on survival rather than the fancy town planning that games like Cities Skylines demands. You are a colony Governor tasked with a variety of missions centred around building thriving colonies on an alien planet called Aven Prime, although for the purposes of this preview I was restricted to the first two campaign missions: Vanaar and Sandy Gulch.

Like most builders your main focus will be on ensuring there is enough water, food and clean air for your colonists to be able to perform their duties and make your colony a success. There is also plenty of resource management in the form of adequate storage to hold the mineral deposits you mine, and the food that you grow, as well as ensuring that your colony has sufficient power to run all the tasks you are asking of it.  As your colony grows you will also be responsible for keeping your colonists happy by providing them with meaningful work, good commuting routes and adequate leisure facilities for when they are out of work as well as keeping crime low through the deployment of drones. It’s all familiar stuff, but the addition of environmental hazards such as alien plague spores that can infiltrate and damage air filtration systems, and shard storms that can obliterate buildings as well as some pleasing alien landscapes makes the process of building your colony a sedate and pleasurable experience. There are two modes you can play Aven Colony, a campaign mode which consists of a variety of missions in different locations on Aven Prime which provide their own unique challenges, and a sandbox mode where you are given free rein to design and build your colony as you see fit. Campaign mode sees you given a variety of objectives that are expected of you: keep your colonists happy and win an annual referendum on your status as Governor, grow and sustain your colony to ensure that enough food and water is available, as well as a lively trade centre with the other colonies around the planet etc.. A win state is achieved once you have managed to construct a huge building that honours the colonists origins called the Earth Centre. Once completed, you can move onto the next mission or continue on building and supporting your colony.

Each mission has a variety of difficulty settings, seven to be precise, ranging from “cakewalk” to “insane” so there is plenty to challenge you once you have completed a mission. The difficulty settings determine things like the quantity of resources, the amount of materials available in resupply pods and the frequency and severity of environmental effects. The first mission suffers from lightening attacks, shard storms that damage buildings and alien spores that attach themselves to buildings, damaging them and also infecting the air supply, all while you are at the mercy of a ginormous worm that tunnels underneath your colony. Controls are fairly straightforward, but they can be fiddly with a huge radial menu filled with a variety of construction items as well as overlay menus, trade menus and colony management menus. The camera also works against you at times with the right stick controlling the lateral and vertical positioning of the camera and the left stick moving it around the map. When things get a bit frantic it does feel overly fiddly. Thankfully you can control the rate at which the game progress with a pause option allowing you to set up a number of actions before allowing the game to proceed. It becomes particularly useful in the late game stage when multiple crises need to be managed.

Aven Colony is a pleasant, relaxing game. It does lack some finesse of other builders with each unit requiring manual micro-managing. It would be more beneficial to be able to set some production parameters so that action is triggered if stock production drops below a certain level, as it stands it relies on you highlighting and examining each building you have built. Furthermore, you will get prompts advising of potential crises mow and again, for example crime rising, but there is little feedback in terms of the impact of installing police drones in that particular area. On normal difficulty this wasn’t too much of an issue, but on harder difficulties management can very quickly get out of hand.

Aven Colony is showing a lot of promise. Time will tell whether there is enough unique events and features to the micro-management to sustain a lengthy campaign, but I am certainly looking forward to playing more when the full game releases.

Likes to shoot stuff and wear pretty shoes. Is a BEAST at Titanfall.
MORE LIKE THIS
aven colony