previous
Gran Turismo Sport in VR purrs like a kitten
random
next
The Swords of Ditto combines Zelda, roguelikes, and generations of content
0 comments

Knack 2 is best with a friend 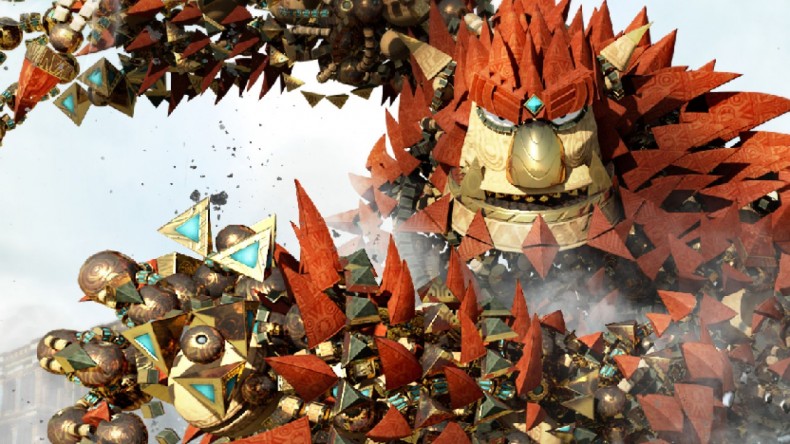 Knack 2 is an action platformer and sequel to a PS4 launch title that stars a size-changing robot, Knack, who is made of a thousand individual pieces.

Since Knack can rearrange and shed the myriad pieces of his body on a whim, the core mechanic in Knack is shrinking and growing. When trying to fit through tight areas, Knack can shrink to a miniature version of himself. But when enemies like trolls show up, it’s best to be the larger Knack, who packs a mighty punch.

Having never played the original Knack, I was struck by how much its sequel reminds me of a classic Dreamcast platformer, only in high resolution (4K, in fact, on PS4 Pro). From the art design to the simple jump and punch gameplay to the level design, Knack 2 feels like a nod to similar games circa the year 2000. It’s wonderfully colorful and vibrant, but the character models are rather simple and cartoonish.

For instance, players do not have direct control of the camera. Instead, the camera follows players on its own. An attempt to manipulate the camera using the right control stick only activates an evade maneuver from Knack.

As the game’s protagonist, Knack has a standard move set. Knack can punch, kick, double jump, shrink and grow in size, and belly flop onto enemies and destructible items like boxes and crystal shards. Knack also has an ultimate mode that can be activated every so often, which makes him very powerful and near invincible. Combat is bone-simple and requires very little strategic thought. At its heart, this is a game for children and people who just want to relax. In the level I played, there was never a tense moment.

Despite being perfectly playable as a singleplayer campaign, Knack 2’s coop mode is where the adventure really shines. What is a rather mundane, mediocre singleplayer journey turns into an amusing time when paired with a friend. I laughed with my co-op partner as we each missed jumps, used an ability to instantly warp to the location of your partner, and raced each other through the environment, even as we shared the same camera.

If one of us fell to our death, we were quickly resurrected next to the other player. If we both managed to fall, the game simply respawns both players shortly before the point of death. There was no perceivable punishment for failure, which adds to the game’s approachability and low difficulty level.

The stage available at E3 was a mountainside town full of moving platforms, some that moved vertically and others that moved horizontally along the hillside. Houses and mills also dotted the cliff face as my co-op buddy and I gradually made our way up the introductory level.

Despite its simplicity and retro design and aesthetics, Knack is a solid title, especially for younger players. Its co-op is low stakes and enjoyable. Just don’t’ expect to be too impressed.

A media scholar who also writes about video games for various outlets. He's interested in digital game production, media industries, residual media, and discourses around gender, race, and sexuality in media and production cultures.
MORE LIKE THIS
knack 2