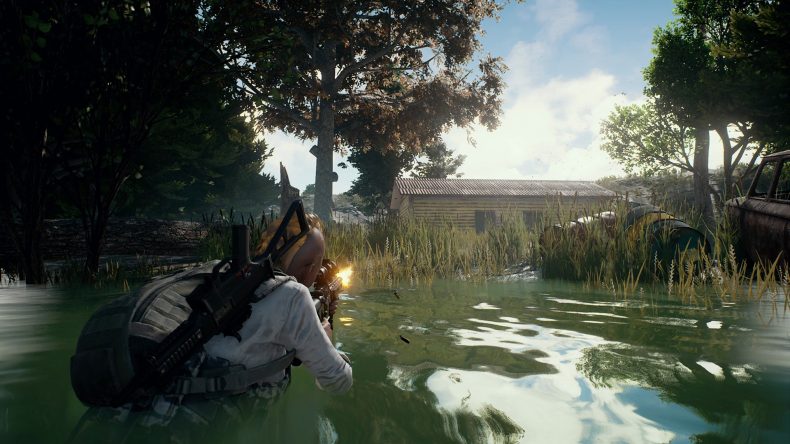 If it wasn’t for my nervous disposition whilst playing, I’d probably still be playing PlayerUnknown’s Battlegrounds right now. It’s only been three days since I first parachuted out the plane and landed on the game’s 8x8km map, but holy mother of God. This game is phenomenal. If like me, you’re new to it, PUBG (as all the cool kids are calling it) is the military equivalent to Battle Royale (or The Hunger Games for all you youngsters) where you land on a huge island along with 99 other players, all with the goal of killing each other.

Whether you go in alone, in a duo or a team, you start with nothing. No weapons, no transport, nothing. You must loot abandoned farmhouses, warehouses, military bases, silos, empty homes, and run-down petrol stations for supplies and vehicles. Sometimes you’ll come across a crowbar or a frying pan (yes, a frying pan), or maybe an AKM or an M416. It’s all about luck, but when you find that weapon, you’re already on the right foot. There are also backpacks that’ll allow you to carry more weapons and supplies, bandages, painkillers and first aid kits to keep you healthy, and weapon augmentations to give you scopes for your rifle or grips for your shotgun – there’re loads of items to grab. Whilst the map may be gargantuan, you can never rest or relax, no matter if you think you’re safe or not. You might not see anyone for long periods of time, but the moment you hear distant gun fire, or the engine of a car, that’s when the nerves creep in. I’ve not played a game that has made me so tense before. You’re always scanning your peripherals, darting your eyes around the screen – waiting for any movement in the distance – anything that indicates shit is about to go down.

PlayerUnknown’s Battlegrounds is all about moments. Moments you’ll talk about fondly in the future, rivalling the tales you have of playing Skyrim or The Witcher 3. It’s fully online, and the story is made by you, the player. Just last night, Adam and I were making our way to an old apartment by the big bridge that runs through the map. We hadn’t seen a soul since we left the plane, and we’d also failed to find a single decent weapon. Thankfully, after finding a shotgun, loads of ammo, and an automatic, we headed to this apartment complex to hold up there whilst we waited for the circle to diminish.

From what I gather, the space in which you can exist in decreases every few minutes, forcing players to reach a circle on the map where you must stay in or else you’ll lose your life for failing the only real rule of the game. As we waited on the complex’s rooftop, a few cars drove over the bridge. My heart jumped in my mouth as one of the jeeps slowed a little. “They’re coming,” I thought, however, they didn’t spot us and kept on moving. After a few more minutes, a car on the opposite side of the house slowed down, and the driver got out. As he got closer, Adam fired at him from above, managing to hit him, but he wasn’t going down. I fired and missed. Then, through some kind of miracle, he fired at Adam, sending him down to the ground. I tried healing, but as I did, the enemy entered the house. Thankfully there were three floors, but every second it took to heal Adam felt like an hour. After I managed to fix him, the enemy was inside. On the roof, Adam and I positioned ourselves on either side of the door. As we were waiting for the soldier to come through, another car had pulled up, but I hadn’t heard it. I was drawn to his presence through the gunfire echoing throughout the apartment block we were stood on. Suddenly, the gunmen burst onto the roof and went for Adam, killing him instantly. “I’m down. He got me,” said Adam. Shit, where is he? Where has he gone? Before I had time to process anything, I turned behind me and there he was. He killed me before I even had a chance to pull my own trigger.

This was one match – one twenty-minute match. PlayerUnknown’s Battlegrounds has captivated me like nothing I’ve played before, other than maybe Overwatch. When this comes to Xbox One, I hope it’s as successful as the PC version. It’s still in Early Access, and updates are constantly coming, with new maps on the way as well. I can’t recommend this game enough, and I hope everyone gets to play this at least once in their lives. From the initial drop where you watch the skies carefully to see if others are heading for your drop point, to the frantic gunfights you’ll encounter after long periods of anxious silence, PUBG is a cracking online experience you won’t want to miss out on.

Video games are cool. Don't let anybody tell you any different.
MORE LIKE THIS
player unknown's battlegrounds

PUBG has passed 5 million players on Xbox One!