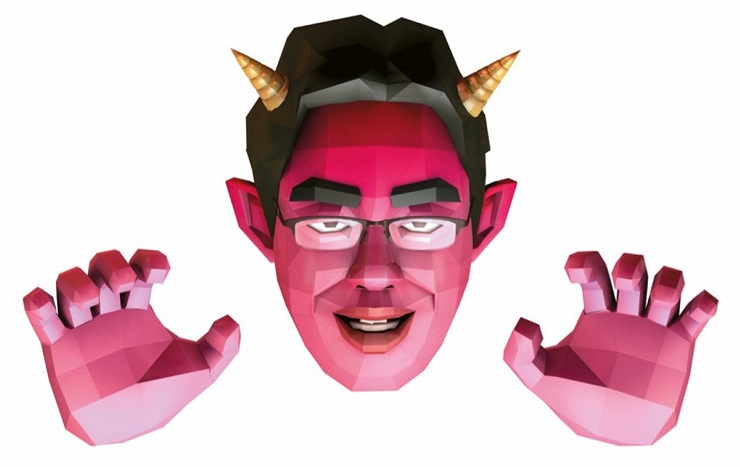 We haven’t seen Dr. Ryuta Kawashima on our DS systems since 2007, the original game came out in 2006, just a year after the DS was first launched, so it seems fitting that one of the last titles to grace the 3DS as it nears the end of its life once again features our favourite brain trainer.

Now, being, for want of a better word, ‘edutainment’, Devilish Brain Training doesn’t really fit into the mound of a typical game, and as a result can’t be reviewed as one. While it’s true that the original versions could be ‘gamed’ and favourable results gained, Devilish Brain Training makes more use of your ability to remember things, which makes it so much tougher to cheat good results. With this in mind, Chris and I have both been playing and decided to compare our results. I’m up this week, so let’s look at how I did.

I have to admit, I’ve had a couple of drinks, so this will be an interesting start. Seems Dr. Kawashima has got his stern parent head on and is lecturing me about my mobile causing me to lose focus. Rubbish. Seems like I’ve got to work out my brain’s memory. So, we start with Devilish Calculations. A sum is presented to me and then I have to write the answer after being presented with a new one. As you do better this then proceeds to two sums, then three sums. I finish on the two sums overall, which I think is good, until the good doctor tells me that this is what he expects from a 70 year old…I’m 35. I finish with my training rank still on F, not the best of starts…I blame the drink. No drink today, so I’m expecting to do better. Consecutive days in attendance unlock more stuff, this time around it’s Devilish mice, a mode where you have to track the locations of mouse icons as they move in and out of a covered grid. A decent performance sees me get up to three mice and pushed up to grade E. A storming performance on Devilish Calculations sees me up to three calculations and as a result I unlock the Concentration challenge, a good barometer of one’s ability to focus. This is similar to Devilish Calculations as I need to monitor the number of blocks on a one-back basis, but this goes on until I slip up. I manage 1 minute and 22 seconds, a 35 year old should manage 1m 15s, so, yeah, I’m on target, go me!

Day three gives me Devilish Reading: a game where I have to read several passages out loud while memorising underlined words, then write those words out. A stunning performance rockets me up to level 4 without a single wrong answer, and this moves me on to grade D. Despite this effort, my concentration score takes a hit, and I only manage 58 seconds in the challenge. I can’t blame alcohol this time either, sober as a judge mate.

Devilish shapes is now unlocked, a mode that also adheres to the 1-back 2-back etc. scenario, this time with complicated shapes. It’s hard and I only get up to 2-back, a score that I never manage to better in all attempts after, so I won’t mention it again. I had to stop there as well as family engagements take precedent.

Back on my commute, so Devilish Reading will be forgotten now, I’m not about to read aloud on a coach full of people. I have, however, unlocked Devilish Pairs, and yes, it’s matching card pairs. It’s pretty easy as any pairs game can be, and I shoot up to level 6. It’s not hard, but it is terribly easy to retain your composure should you make a mistake. In other news my Concentration Challenge score is up to 1m 33s, a new record, so I’m going good! I also make it up to Training grade C, which I don’t surpass in the next three days, don’t mention it, I’m not proud.

Game’s throwing new Devilish training exercises at me, at some point I unlocked Devilish Blocks, a game where you need to memorise which block disappears from a pattern. I managed to get that to level 6. I’ve also unlocked Devilish Cups, where you need to remember what numbers are under the cups as they move and then tap them in numerical order, in that I manage to get up to four cups, it’s more tricky than you’d think. Absolutely breasted the Concentration Challenge too, 1m 55s, awesome! I’m really tired, had a really rough day, so I’m not feeling up for Kawashima and his goofy antics, but I throw myself in anyway. There were no new Devilish items today, so I went back to Cups and got up to five of the buggers! Devilish Mice also somehow saw an improvement up to a fast version of the three-mouse task. I did however flounder Concentrating, down to 1m 17 seconds, practically back to where I started. Balls I say, balls!

Cups sees no improvement, you can’t win them all. Pairs sees an improvement up to level seven before I crash down to level four before steadying back at level six. While I put myself back to Calculations and see myself rooted to the three-back routine. While my training rank doesn’t improve I do see myself set a new record for Concentrating with 2m 8s. A near whole minute more compared to how I started.

I honestly do not feel that these are improvements I’ve made by gaming the system; this is genuinely an improvement in my brain function as far as I’m concerned. I’m a terribly forgetful person, my short term and long term memory are dreadful at best, so to see me reporting decent results fills me with joy. I still couldn’t tell you what my wife said to me five minutes ago, but I can count blocks for two whole minutes, so who’s the real winner here?

A lover, not a fighter and an all round good guy (he would say that, he wrote this after all), he's happy to be here as part of GIAG.
MORE LIKE THIS
Dr Kawashima’s Devilish Brain Trainingnintendo