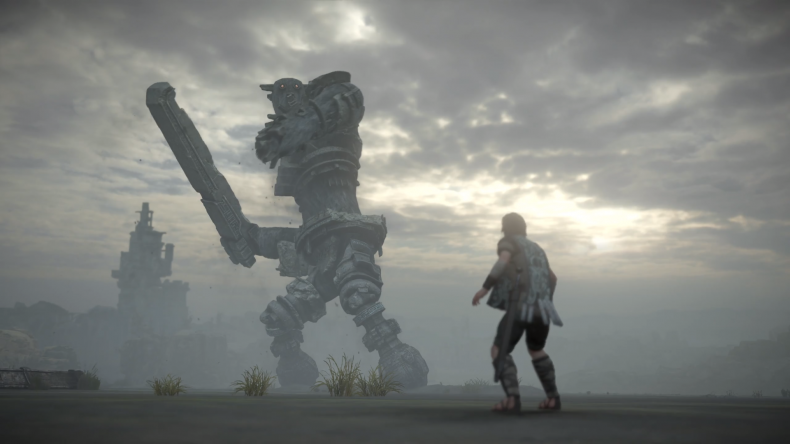 Here we go again. Shadow of the Colossus is being released for the third time, and this time around it’s going to sell the 100 million it deserves to sell, even if there aren’t that many PS4 owners in the world, right? Well, probably not, but here we are – the second remaster of the 2005 (2006 in Europe) classic Shadow of the Colossus, again being remade by Bluepoint Studios, and again just being something utterly bewitching.

I’m a fan of this game. I’m old enough and snobby enough to be able to claim I first finished it all the way back in 2006 when it released on PS2, making the hardware audibly creak as it struggled to push out that gorgeous, huge world of exploration and ambiguity. Five years later I did it again on PS3, except this time in high definition. Six years after that, and I’m back in there again – only this time, Shadow of the Colossus is different.

The crux of the experience isn’t different, mind you – you’re still a lone protagonist along with his horse, questing across a desolate, beautiful world to try and bring back his lost love by fighting 16 Colossi. Each of these beasts requires a different approach in order to reach their weak points and take them out. It is exhilarating and captivating in equal measure; an entire game comprising of a series of boss fights. And it is, and always has been, brilliant. Veterans like you and I – come on, we’re all cool here, we all played it first time around, right? – will know there was one thing about Shadow of the Colossus that really made it unique, though. Not the setting, not the vague story, not the bewildering encounters with the world’s 16 Colossi. No, it was the controls. Because they were awful.

I mean, you’d get used to them, obviously, but going back now – going back in 2011 – is a chore. Fortunately, somebody at Bluepoint either got a great memo or the team has just up and gone ‘why yes we can modify a masterpiece’, and we’re now welcoming a brand new control scheme to the game. You can still play the old way if you’re a masochist, but the new way is better, it makes sense, jump is on X, grab on R2, it’s quicker to get on your trusty (oh so trusty) steed Agro, rather than you standing there jumping on the spot while the horse looks on aimlessly, thinking horsey thoughts.

It’s a tweak, and it’s by no means the biggest change to Shadow of the Colossus – you’ve already seen the biggest change with your eyes, above these words – but it’s something that fundamentally alters the game and makes it, dare I say, much more approachable for the newcomer. That’s a good thing. On to the obvious: the looks. This time around Bluepoint isn’t just rezzing up the original game and making it run at a reasonable frame rate – we’ve got a complete asset rebuild on our hands, and by crikey Shadow of the Colossus is looking special.

I will admit at times, like when staring at a tree’s foliage, you can see the PS2 history of this game. It seems to be something built with 12-year-old assets as a reference point rather than entirely created from nothing. But that matters little, for two reasons I will lay out using words.

One, it’s gorgeous. Yes if you’re staring at one texture you might see the seams. But when you’re slowly clip-clopping your way through an empty woodland, sunlight dappling through the leaves and the serenity before a battle with a giant beast washing over you, staring at a texture is the last thing on your mind. Shadow of the Colossus for PS4 is stunning, there’s absolutely no doubt about it. And the reason for that comes in as my number two: the game’s style is still there. Shadow of the Colossus was created with care and artistry behind it, with the visuals informing more than just your coos of wonder at the world around you. A muted palette; a quiet world – it’s all like that for a reason, and so Bluepoint has kept it.

Even if you are building with 12-year-old blocks, it matters little if they’re already interesting. If they’re already stylistically superb. If they’re already (at least for Fumito Ueda’s trilogy) unique. Over a decade later, the third time Shadow of the Colossus has been made, and I’m still left open-mouthed at the sight of our giant, desert-based target emerging from the sea of yellow, forcing me to – once again – chase him down on Agro’s back while peppering his sacs with arrows.

I am delighted to say the PS4 remake of Shadow of the Colossus is shaping up very well indeed. Hardly any change was needed, but the tweaks that have been made – mainly to the controls, and definitely to the look of the thing – are welcome. Games like this deserved to be made and remade repeatedly to hammer home the fact that they are great, games can be better, and we do deserve nice things.