previous
Civilisation VI: Rise and Fall introduces the Cree and Poundmaker
random
next
6 tips to help you get to grips with Rainbow Six Siege
0 comments 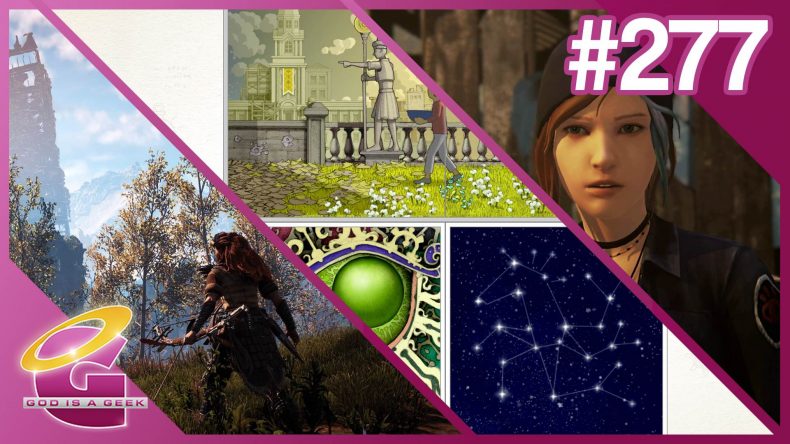 Hey, hi, hola, how’s it going? It’s 2018 and this is the first podcast of the year from myself, Chris, and new guy Adam Carroll. Yes it’s confusing he has the same name as me, and yes it’s awkward I can’t even called him “Adam C” because that is also me, but hey, he’s a fantastic chap and loves his games, so go say hi to him on Twitter and welcome him to the family.

Some house cleaning, then: you may notice the formatting of this article has now got a number, this one is #277. Technically that’s incorrect, we know this. We’re well over 300 podcasts now, having been going since around 2011, but at some point we lost those episodes to time (and hard drive failure) so, bizarrely, we even “relaunched” the pod in 2012 accidentally: we were doing “seasons” then, which was a misguided attempt at me to be interesting and different. It failed. So yeah, this is episode #277, sort of. We don’t number the GOTY pods, and we’ve done that since 2012, so… do the math and this is probably episode three hundred and something. None of this matters, really, just wanted to let you know if you were confused by your feed, somehow.

We’ve also moved Podcast Hosts, which is something we’ve been meaning to do for ages. We’re with Podbean now. There’s no fancy affil link I can give you to let them know we’re awesome, but if you wanted to “follow” us on Podbean, and comment, it’d sure make us look good. They have their own app for Podcasts, which is quite good actually, and it lets you comment on podcast there, too, which is nice, and an interesting way to push Podcasts forward, via direct interaction.

You’ll still find episodes on our YouTube Channel, but assuming everything has gone smoothly and I’ve not cocked anything up, you will only notice the change of episode title formatting.

On that note, if you want to hear the podcast at least 24 hours early (often 48 hours), you can pledge $1 a month to us on Patreon.com/GodisaGeek. This will not only give you the early access, but a longer podcast, with an additional 10-15 minutes (sometimes longer) of content, especially for our Patreon Saints (it may be 2018, but I’m sticking with Patreon Saints, because hey, it works).

That’s about it, really. You can send questions to us for the Pod @GodisaGeek, or via podcast@godisageek.com. Do that, and we’ll have some fun.

Right, get listening, and commenting (on Facebook, on Podbean, or on iTunes) and yeah, here’s to a Weekly Podcast in 2018. So in other words, if you want to know what I thought of Rogue One after I finally watched it over the holidays, you’ll need to be a Patreon. What about what Chris thinks of the new Eminem album, or what Adam Carroll’s fav movies of the holiday were? $1 is all it takes!

This week’s episode is all about the games coming in January and February 2018. Games like Monster Hunter: World, Shadow of the Colossus, and more. As well as that, we also chat about what we played during the holiday period of 2017. That means chatter about Life is Strange: Before the Storm, Gorogoa, Bury me my love, Figment, Horizon Zero Dawn, Puyo Puyo Tetris, Skyrim on Switch, and Final Fantasy XIV Online.

Just want the Mp3 file? Right click here and save as!