previous
Fortnite 4.1 downtime begins now ahead of Avengers mashup
random
next
What to Do When You’re Tired of Regular Video Games
0 comments

Fortnite 4.1 is now live with the Avengers Mashup event 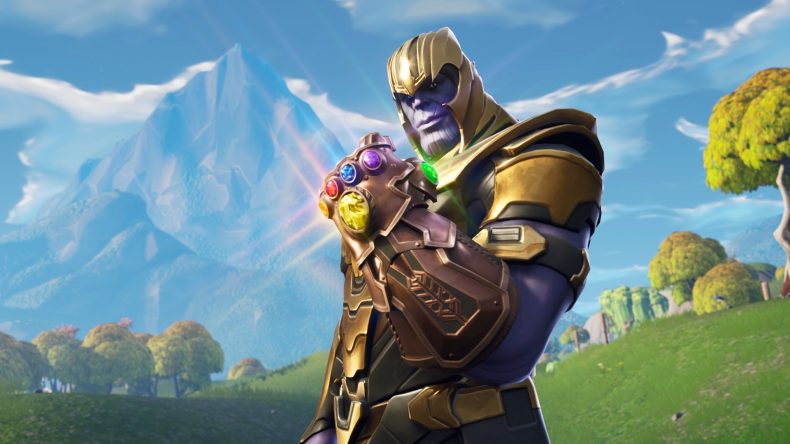 The servers are back up and Patch 4.1 adds the Avengers Mashup event with Thanos. The event will have matches last around 15 minutes during the limited time the event is live and a meteor will fall near the beginning of the game. Anyone who equips the Infinity Gauntlet will become Thanos. Full details are below in the video:

Patch notes are as follows:

Mashup Details
Early in the match, a meteor will land in the storm safe zone, delivering the Infinity Gauntlet.
Any player who uses the Infinity Gauntlet will transform into Thanos.
If Thanos is eliminated, the Gauntlet will fall to the ground, free for the taking. If it sits unused for too long, it will disappear until another meteor appears.
Last player standing will be the victor!

Thanos Details
Ability 1 – A mighty punch that knocks enemies back and destroys structures.
Ability 2 – Thanos flies towards the ground, hitting an area for knockback and damage.
Ability 3 – Harness the energy of the Power stone to fire a blast that deals damage over time.
Ability 4 – A super-jump that can vault Thanos over all but the largest obstructions.

Thanos has both shields and health. When he eliminates another player, his shields regenerate. His health never regenerates.
Thanos doesn’t take fall damage.
Thanos does not build, use weapons or things like launch pads. He has no need for such petty human devices.

Storm + Map
Maximum match length is roughly 15 minutes.
The match will start with the storm circle already closing in over the island.
The storm does more damage than normal, ticking for 5% health during the first circle and 10% for the rest of the game.
Loot
Only Rare, Epic & Legendary weapons will be spawned.
Increased chances of treasure chests spawning from 50-70% to 80-90%.
Increased chances of ammo boxes spawning from 65-80% to 85-95%.
Floor Loot spawns nearly 100% of the time.
Launchpad spawn likelihood greatly increased.
Harvesting resources doubled.
Resources found in loot increased from 30 to 60.
Chug Jug, Port-A-Fort, Boogie Bomb, Slurp Juice, Bush, and Remote Explosives drop rate increased.
Regular Grenade, Shield & Bandage drop rate lowered.

Increased the likelihood of the final circle ending near the outer areas of the map by 25%.
Improve the variety of ending scenarios to outside the central region of the map.
Bug Fixes
Fixed an issue that allowed Sprays to camouflage Remote Explosives, Clingers, and Damage Traps.
Fixed building preview not being rotatable when overlapping an existing building while using a controller.
Fixed soccer game effects not playing when scoring ⚽.
Fixed a couple of issues that caused the player camera to position itself under the water in Loot Lake.
Fixed the collision on the tire stacks so players will bounce when walking into them again.
Fixed a hole in Dusty Divot that players could get stuck in.
Fixed an area where players were able to hide under the terrain and damage players from below.
Fixed an issue that caused Turbo Building to not work properly if the player was holding down the build button before switching to build mode.
Fixed a chest at the prison that would be empty upon opening it.

You can now join the party of players that are already in a match.
Party members in-match will appear holographic in the lobby and will give you time and player count updates.
Season 4 topics added to the in-game Battle Pass FAQ.
Bug Fixes
Removed the loading screen that was displayed when transitioning from the starting island to the Battle Bus.
Fixed the minimap briefly showing the wrong location after being eliminated.
Fixed an issue that caused some icons on the UI to misalign after switching in and out of build mode.

Bug Fixes
Jump Pad health bars will now update properly when damaged.
Fixed an issue that made it difficult to pick up items that were dropped behind the tires in a Port-A-Fort.
The Port-A-Fort can no longer destroy the meteor in Dusty Divot.

Emotes now perform better on different characters (hands will connect, legs won’t be over-extended, etc.).
Bug Fixes
Updated the Banner image for Battle Pass tier 69 to now be correct image.
Fixed an issue that caused the Royale Flags Back Bling to stretch when previewing it in the Locker.
Fixed an issue causing character’s helmets to sometimes float above their heads.
Fixed distant characters not animating properly if they had never been rendered before.
Fixed characters popping between levels of detail when more than one character was around the same distance away.

Improved overall frame rate when many characters are visible by optimizing movement and update rates.
Delayed triggering the “Game Over” HUD, which caused a hitch on death.
Optimized Spray Paint contrails.
Optimized content in frontend lobby map.
Added more logging to get more info on hard-to-reproduce hitches.
Bug Fixes
Fixed hitching caused by audio log spam.
Reduced backend system logging that may have impacted performance.
Improved async loading time during level streaming by fixing an issue where shrubbery was trying to load but had no mesh.

Bug Fixes
Fixed an issue that prevented Replays from saving.

Fortnite is available on iOS, PS4, Xbox One, and PC platforms.