2018 was the year my dreams unfortunately came true 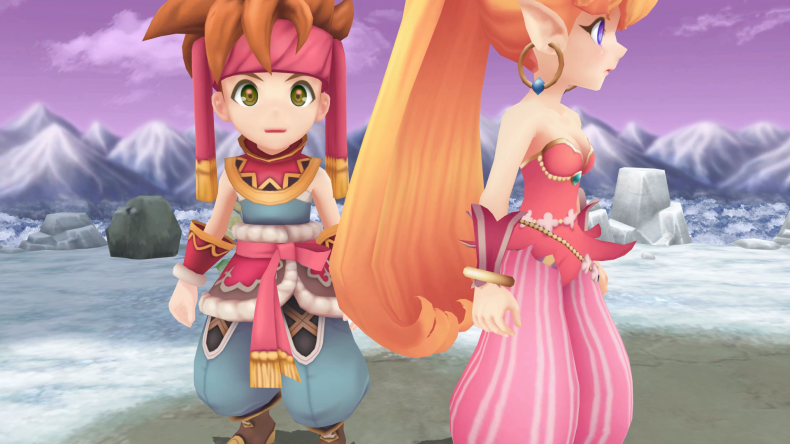 “Be careful what you wish for, lest it come true.” the saying goes. An old proverb, meant to foreshadow that just because you get what you think you want, the end result might not always live up to your expectations. And in February this year I learned there’s some truth in that saying, when a wish I’d been holding onto for 25 long years finally came true, and sadly it wasn’t worth the wait.

I’ve been gaming for most of my 35 years, starting out with the trusty ZX Spectrum, with the likes of The Adventures of Dizzy or scrolling text adventures to battle through. And that’s without mentioning the part where you’d hold your breath for the last of the 30 minute loading time, praying for the whole thing not to crash. But my formative gaming years would begin from Christmas 1992 when there was a Super Nintendo Entertainment System under the tree. Not long after, as my SNES game library began to grow, I think it was actually my dad who recommended a game to me. I guess at this point he still believed he’d bought the console “for the whole family” as opposed to it being just mine, the poor naive fool. But despite this, I cannot thank him enough because the game he recommended to me was Secret of Mana.

It would be a game that would change my childhood. It would take console gaming from a very enjoyable hobby, to something I stuck with for the next quarter of a century, and who knows how long into the future too. The game captured my imagination, it was my first experience of a true RPG with levelling characters, and a story that was engaging and rewarding. The environments were beautiful and varied, and the accompanying soundtrack was nothing short of fantastic. The game had knights, magic, evil and even dragons, it ticked so many fantasy genre boxes, that it felt like a title that was made just for me. As such, it was the first game I truly engrossed myself in – I know every nook and cranny of that game, its secrets, its patterns, its intricacies. And it is why when my time with it had been spent, I referred to it as my favourite game ever, and that’s a plaudit the little RPG that could from 1993 still holds to this day.

And naturally, ever since, I’ve always fantasised about what a remake of Secret of Mana could be. What did I want?

Well, fundamentally I wanted to recreate the magic of my most loved game. Most of us have treasured memories of gaming from our childhood, and I wanted to recapture that with something fresh but familiar. Throughout the past 25 years I’ve borne witness to the natural march of gaming progress. Games are becoming larger, more involved and more intricate. I’ve seen Zelda evolve from 2D a Link to the Past to the vast, sprawling Breath of the Wild. This development of what is possible only served to spur my curiosity of how an old game could be re-imagined on a more modern system.

And re-imagine I did. In a big way.

I wanted the game to be redone into a sprawling 3D world, set in a third-person perspective. I wanted the magic in the game to have a complete visual overhaul, and to be stunned by the lighting effects and lush environments. Buildings would have a sense of scale and foreboding, and boss battles would require a mix of tactical attack, dodge and defend to overcome. Perhaps this high benchmark wish list was pie in the sky though, and I was setting myself up for disappointment. But, having said that, its important to always dream big with these sorts of things, right?

And besides, over the years I’ve seen RPGs themselves advance and flourish, be it Skies of Arcadia, Tales of Symphonia or Xenoblade Chronicles. I’ve seen what can be achieved as the genre is pushed to its limits, and we as gamers have reaped the benefits. All the building blocks have been laid, and as time has passed, there seemed to be less and less barriers in the way of why the remake couldn’t be made. All, I guess, that really stood in its way was whether there was demand for such a game. What did I get?

Well, as I’m sure many of you know my calls were heard earlier this year when a fully-fledged remake of the game was released. And as you can probably guess from the steer of this article, what was released was far short of the lofty expectations I’d been dreaming of for years. That would be a polite way of putting it. To say it pissed over what made the game great and bastardised the experience would be closer to the mark. Yes things are about to get ugly.

Before I carry on I think it’s worth saying, that the remake isn’t a terrible game, not at all. But that’s because its foundation is a classic, a title that often frequents “Game of all time” lists and the like. The fact that this remake falls so far from grace to be distinctly average is the crime at hand here, that and defecating on my childhood dreams.

The main problem with the remake was the fear of change. Whilst it is commendable that the people responsible for the game were aware they were dealing with a beloved game, that appears to have been their sole consideration when developing this remake. Remaining faithful to a SNES game, including mechanics and restrictions of the 16-bit era, warts and all, was a massive misstep. This was an opportunity to move away from the janky hit-detection and time-lag from a bygone era, to show how the game would have been made, had the technology been available. These quirks were forgivable in 1993, but today’s audience quite rightly expected better. And the things they did decide to spruce up the remake only made things worse. The attempt to improve the visuals, but stay true to the simplistic art style of the 90s resulted in a bland 3D modelling that looks like a small step up from Minecraft, and the voice acting whilst passable, was sporadic so lacked the cut-through to be a truly engaging addition.

And then the music, my god the music. In my opinion, Secret of Mana has one of the greatest soundtracks of its generation, and one I often go back to listen to. So, the remake always had a tough job in my eyes to be sure. But having listened to Nintendo or even Square themselves successfully reinvent old tunes for modern games, I looked forward to what could be achieved. What I got made my ears metaphorically bleed with rage. Somehow, these rehashed tunes managed to suck all the atmosphere out of their predecessors, and became offensive background noise to gameplay as opposed to the original versions that sent shivers down your spine as you entered new areas, unsure of what you were about to face.

Overall, what I got was a mess, a remake that felt rushed, and an overall package that had lost the spark and soul that had charmed me 25 years ago, and still does so to this day. Well despite the failings I did play the game to completion, but mainly out of curiosity than anything else, to see if the game did anything clever towards the end (it doesn’t). And annoyingly I’m in a situation now where I wish this remake had never existed. Not because it was an average experience, a chunk of time that I’ll never get back, although that is true. No, the main reason why I wish this remake wasn’t done is because now I have to defend the game against quite justified criticism. There will be some people who never played the SNES original whose only experience will be this remake, and they’ll scoff at it and wonder why people like me fawn over the game. They’ll wonder how such a bland, average and janky experience can be so beloved.

To those people, my only recommendation can be to seek out the original. If you want to see what all the fuss is about, the play the game the fuss was generated from, not this hot mess of a remake that sullies its good name. Pretend as though the remake was never made, ignore its existence, and if that sounds too absurd, imagine how I feel advising people to ignore my long-held dream, my gaming wish of a quarter of a century.

“Be careful what you wish for, lest it come true.” the saying goes. And there will be lots of you out there wishing for a remake of a beloved game. And this rant may have well put you off, but have no fear. There are numerous examples of this done right, such as the remakes of Spyro and Crash Bandicoot, and even the fabulous Shadow of the Colossus. Many of us will have an eye on the new year, when the exquisite-looking Resident Evil 2 remake finally lands, full of promise. And with these titles, I look on with a sense of pure jealousy that other remake get the love and attention they deserve, and my own personal dream was shattered into some average mess. All that’s left to say is to wish everyone a Happy New Year, I hope next year all your gaming dreams come true, and in time I may get over receiving mine.