Days Gone is a promising adventure set in a dangerous world

Sony’s first party games over the last few years have been nothing short of extraordinary. Horizon: Zero Dawn featured a rich world filled with robotic wildlife and astonishing landscapes, God of War gave us some of the finest mechanics ever seen, draped in Nordic wonder and drama, and Marvel’s Spider-Man has become the superlative gaming experience featuring Stan Lee’s definitive creation. But what’s next, and will they ever do better than these iconic games?

I recently went to London to play Days Gone. The team behind it, Bend Studios, is known for creating the iconic Syphon Filter series and the PS Vita gem Uncharted: Golden Abyss (and *cough* Bubsy 3D). They’re clearly a team with a lot of experience in making great video games, and with the last four years spent developing it, it’s clear a lot of time has been put into making Days Gone more than just another open world title. 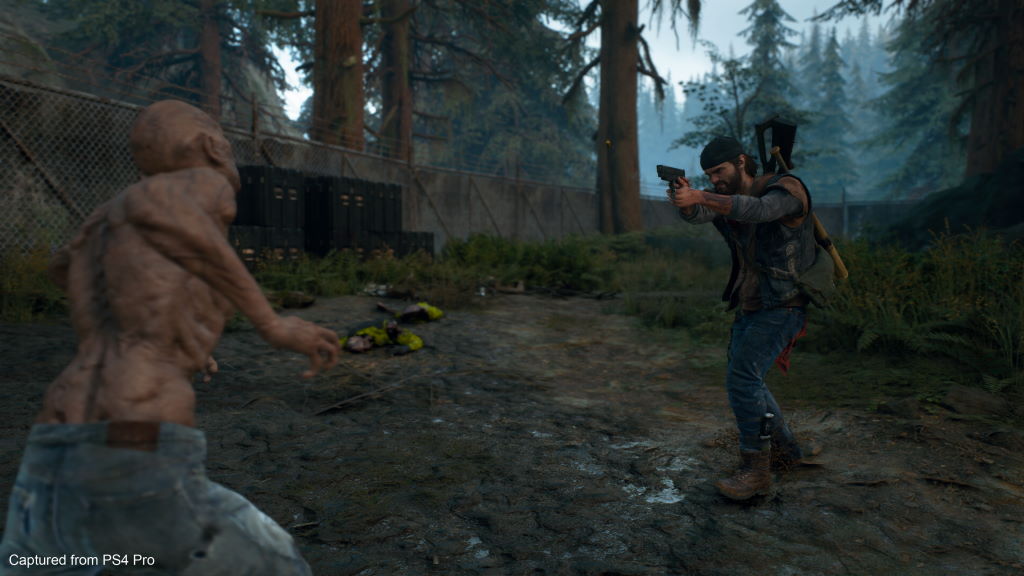 Before I got a chance to play, John Garvin, the Creative Director and Writer, informed us that the finished product would be a 30-hour beast, and what I was about to play was a small snippet of the final adventure. But three hours was enough to get a good idea of what to expect, and there’s plenty there to get people excited. Personally, nothing blew me away, but there’s a solid core experience with some interesting mechanics I believe has the potential to last for the full playthrough.

Deacon St. John seems like a vanilla character on the surface, but as I saw more about his motivations and got more of an idea about his personality, it became clear that there are more layers to him than at first glance. I joined Days Gone after the freaker (zombies to you and me) outbreak had hit its apex. Deacon and his girlfriend, along with his best friend Boomer, are trying to find a way to escape, and upon reaching a rooftop they see a helicopter evacuating citizens. The doctor on board says there’s not enough room for all three, so after an emotional farewell, Deacon stays behind as Boomer is injured and he doesn’t think he’ll survive alone.

Tears flow, and you eventually wave goodbye to her, but the helicopter crashes as does the world around Deacon. It’s a moving start, reminiscent of the wallop to the heart that The Last of Us gave us in its introduction, but it works because it makes you care about the protagonist. The opening section of the game is all about getting used to how the bike controls, as well as the shooting. It’s all straightforward, but it feels mostly good. The bike feels a tad awkward at first, but you get used to the handling sharpish. The melee combat is satisfying, with some smart concepts when it comes to simple punches, and using the butt of Boomer’s shotgun on an enemy’s skull worked wonders.

There’re some nice touches when it comes to scavenging scrap for crafting. Most of it is found in the back of old cars, but some still have a working car alarm, so if you trigger it you best be prepared to disable it as quickly as you can, or else a couple of freakers will be drawn to it. Sound plays a big part in attracting unwanted attention, so the need to be as quiet as possible pays off in the claustrophobic areas such as tunnels and maintenance rooms, to the open spaces where Hordes are wandering around.

Hordes were one of the features of Days Gone I was most excited to see in action; I was curious to know whether they were organically found, or just part of specific missions. Whilst driving around the open world of post-apocalyptic Oregon, I stumbled across an abandoned house. I took out a few freakers on the inside of it, causing me no real trouble at all. Suddenly, an alert popped up informing me that a Horde was close by. An icon appeared on the mini map, so naturally I headed towards it. Then, there in one of the canyons, I saw hundreds of freakers like bees in the wind, moving with efficiently and purpose. There was no way I was going to get any closer, so I jumped on my bike and got the hell out of dodge. It was majestic as it was terrifying, and I can’t wait to see them more in the full release.

There’re different types of freakers that I encountered. Swarmers react to sound like clickers in TLoU, and Newts are infected children that leave you alone unless you get too close, then they’ll jump on you and try to tear you apart. Also, humans who’ve been corrupted by a lack of law enforcement and the need to survive have formed groups hellbent on killing you and stealing your supplies. At one point, Boomer got maliciously attacked by some psychos with burned symbols all over their bodies. Oh, and I fought a grizzly bear. The threats in Days Gone are vast, and at times overwhelming, but you have plenty of tools at your disposal, such as a variety of craftable explosives and a multitude of weapons.

Skill Trees also feature in days gone – three in fact – and each one focuses on a different aspect. Melee allows you to improve close quarters combat, Ranged helps you attacking from a distance, and Survival allows you to improve how you keep stealthy and stocked up. I didn’t get a chance to unlock a lot of stuff, but I saw what was on offer, and there are special abilities such as Focused Shot, which gives you an opportunity to slow down time for a second or two to get in a decent shot.

The survival elements are more The Last of Us than Metal Gear Survive, which was a big relief to me. You find random items, then choose what to craft in the menu. Looking after your bike is important, but fuel isn’t hard to come by, and you can repair your motor quite easily. Obviously, that might change the further in you get, but it was a comfort to know it wasn’t as complex I thought it could be.

Days Gone is shaping up nicely, and with only a month and a half to go, I’m confident that I’m going to enjoy. It never took my breath away, but there are a lot of solid ideas and a story with plenty of depth. The combat is satisfying, and the various enemy types are going to provide a healthy challenge. I’m looking forward to spending many hours exploring the world Bend Studios has created, and if that means I encounter a Horde or two, so be it.

Video games are cool. Don't let anybody tell you any different.
MORE LIKE THIS
Bend Studiosdays gone

A PS4 port of Uncharted: Golden Abyss (the Vita one) isn’t out of the question