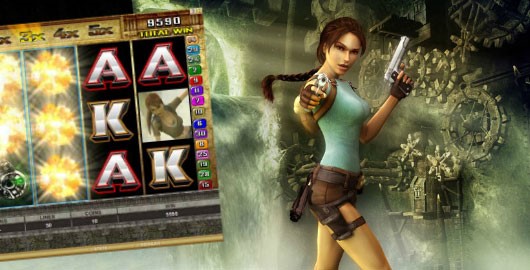 Today’s video game fans have a huge selection of video games to choose from. One of the reasons why video games appeal to many people around the world is the fact that they have all types of themes. You’ll come across video game based on Hollywood blockbusters, car racing, ninjas, detectives, dinosaurs, fights, mythology, fantasy and many more.

One of the greatest developments in the video game industry is the introduction of video slots (online slots or online pokies) with video game themes. If you happen to love video games as well as online gambling, you can choose to play video game-themed pokies for a chance to win a lucrative prize. We will talk about the most popular video slots for video gamers who are interested in online gambling. If you would like to play these games, we’ve found a  site with the best pokies. In 1996, enthusiastic video game players celebrated the first PlayStation version of Tomb Raider. The highly intelligent and beautiful Lara Croft is the game’s main character who ventures into ancient tombs. If you love the game, you’ll also love the online slot version of it. The slot game comes from Microgaming, one of the world’s leading developers of online casino games.

The first version of Microgaming’s Lara Croft: Tomb Raider slot was released on October 2004 giving online slot fans the opportunity to spin the reels for real cash. It features 5 reels, 3 rows, and 15 paylines. However, the best version of the game was developed in March 2008 with the title Lara Croft: Secrets of the Sword. The 2008 version is the best choice because it comes with high-quality graphics, 30 paylines, and more bonus features.

As you spin the reels, you’ll see Lara Croft do stunts when you land a win. You’ll also benefit from different features including Free Spins with Rolling Reels, Multipliers, Super Mode, and a fascinating Global Adventure Bonus. You can win up to 450x your weighted average bet! Hitman is another famous game in the history of video gaming. The first version of the game (Hitman Codename 47) was released in 2000 while the latest version (Hitman 2) was released in 2018. You can read a detailed review of Hitman 2 here. Without a doubt, the Hitman series has attracted many video game players including PC and game console users. It has also attracted the attention of Microgaming leading to the development of the Hitman slot.

The slot game features 5 reels, 3 rows, and 15 paylines. It has themed symbols including Hitman holding his weapons, a sniper rifle, a knife, pistols, and a lethal syringe. During gameplay, players can win 18 Free Spins with a 2x Multiplier. The game’s Insignia Bonus awards up to 6,000 coins while the Contract Bonus awards up to 270,000 coins! Resident Evil is another famous title in the video game and film industry. The horror sci-fi series is loosely based on the video game. The original game targeting PlayStation users was developed in 1996. Since then, players have enjoyed different versions of the video game and can now play a video slot with the same name.

Developed by Skywind Group, Resident Evil 6 is a 5-reel, 25-payline slot with amazing features to boost your chances of landing a massive win. This game gives you the opportunity to fight with Leon, Ada, Chris, and Jake against the man responsible for destroying Raccoon City. You need to work with these characters to take on the zombie, kill the Ustanak, and crack entry codes to unlock various rewards including Free Spins, special Wilds, multipliers, and cash prizes. NetEnt is one of the leading developers of high-quality casino software and does not disappoint when it comes to slots. One of the company’s greatest achievements is the Scarface slot game based on the famous 1983 American crime movie as well as the video game.

Featuring 5 reels and 20 paylines, the Scarface slot has a captivating gangster theme. As you play the game, you’ll benefit from various features including Nudge Spins, Stacked Wilds, the Nudge Wild, the Say Hello to my Little Friend Bonus feature, and the Free Spins Bonus feature. You will also interact with characters from the film including Manny, Elvira, and Tony Montana. In addition to the characters, the Scarface slot includes scenes and animations from the actual film. It’s definitely a great option for anyone who has played the video game or watched the movie.

In sum, video gamers who love gambling can have fun and win some money by playing video slots based on some of the best video games. The best part is that video slots are easy to find and modern releases can be played on PCs, smartphones, and tablets.