previous
Super Monkey Ball: Banana Blitz HD is making its way to PC & consoles
random
next
This week's Red Dead Online is all about the Horses
0 comments 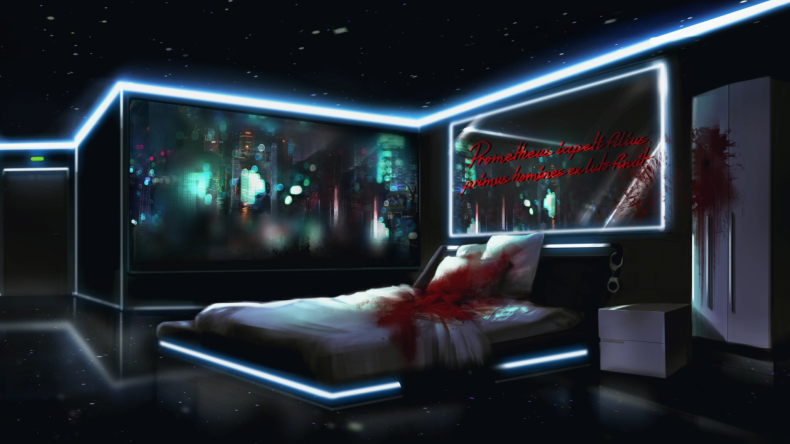 Investigative games aren’t as prevalent as I expected them to be, after the success of LA Noire back in 2011. There have been a few, with the Sherlock Holmes games and even Call of Cthulhu throwing in some investigation mechanics, but they’re still few and far between. Visual novels, however, have grown in popularity in the last few years, with more and more making their way West and showing no signs of slowing down.

Dry Drowning aims to bring both of these worlds together, putting you in the shoes of Mordred Foley, a disgraced private detective blamed for the deaths of two suspects in his last case. Set in a futuristic dystopian city, where crime and corruption are rife (it’s not exactly subtle with its cliches), a politician is accused of an extremely violent murder, which just happens to mimic the methods of a serial killer from Foley’s past, dragging him into an investigation that could save his career and his life, or maybe end both. Where Dry Drowning comes into its own, is with its futuristic tools that allow you to examine crime scenes after they’ve been cleared up, through the use of holographic images. On top of that, Foley has a unique trick: he can see when people are lying. Using what the game calls the “Living Nightmares” system, an animal mask appears over the face of anyone lying to Foley, but comes with some reality-warping side-effects. This leaves the player with an interesting dilemma, as they know somebody is lying but it’s up to them to find a way to prove it, through dialogue and the Phoenix Wright-like use of evidence.

This system has a massive, immersion-breaking flaw, however. When you enter the Living Nightmares part of a conversation, three strange eyeballs appear over your character’s head and a mask appears over the face of the person you are interrogating, which sounds simple enough despite the lack of explanation, at least early on. Dry Drowning is a game that emphasises a Telltale-like point that your decisions will affect the outcome of the story, yet those three eyeballs I mentioned a moment ago? Those are your lives. Yes, in a game that says your choices affect the story, you can get a game over by making three wrong choices during these set scenarios. I was genuinely intrigued by the story up until the first of these interrogation scenes, but then I was instantly pulled out of the story and reminded that this was a videogame. What makes it more frustrating is the way the game just assumes you’ve already come to the correct conclusions, as you’re suddenly required to pick the right piece of evidence or the right conversation option, completely out of nowhere in some cases, without any real hints. Look, I know I can be an idiot when it comes to puzzles, but even if that’s the case here, the game needs to cater for that eventuality. I shouldn’t have to brute force a puzzle or confrontation, because the game hasn’t given me enough information to make an informed decision, especially when it can affect the immersion in a game that is all about its story.

This was a preview build however, so these issues may be ironed out for the full release. I do hope so, because there’s definitely something there, in this game. Dry Drowning puts you in the shoes of a character that isn’t entirely likeable, but casts him alongside a much more human character in Hera, his long-suffering partner in the investigation business. Hera is also troubled by the guilt of apparently being responsible for the deaths of two people and plagued by memories of Pandora, the serial killer that seems to have returned. She helps to keep Foley grounded, and keeps the player from hating the rather brash and unfeeling detective. Mostly, anyway. It often works, too. Very early on, when you are investigating the first murder scene using the AquaOS reconstruction software and it becomes apparent that the serial killer may have returned, Hera is viewing through a comm line and begins to panic. You are given the choice, accompanied by the dramatic sound of your heart beat, to hang up and spare her the gruesome sights for her own good, or let her see it all. It’s not subtle, but at the same time, it is. It makes you forget that Foley is an emotionally stunted sociopath, giving you the chance to help him display empathy towards his friend. Either that, or I’m just a soft sod that always wants to do the right thing in these kinds of games. Perhaps it’s a little from column A, a little from column B. Who knows?

I did enjoy my time with Dry Drowning (there’s a sentence I never thought I’d say) despite its issues. The characters were interesting and the semi-futuristic, dystopian setting made me want to learn more about the lore of the city and its people. Even if half of those people are sleazy, corrupt, or both. Or worse. The controls are simple, requiring no more than two or three clicks of the mouse to achieve any desired progression, from clicking the “investigate” button to be able to search a scene, to using the dialogue button to speak to any nearby character. You can enter your inventory to review any evidence or read up on any of the characters/lore as it becomes available, though sometimes the information is far too light on important details, making it almost irrelevant. As I say though, this isn’t the finished game and there is time for more text to be added, and for many of the issues mentioned here to be fixed. I guess we’ll see, on that front.