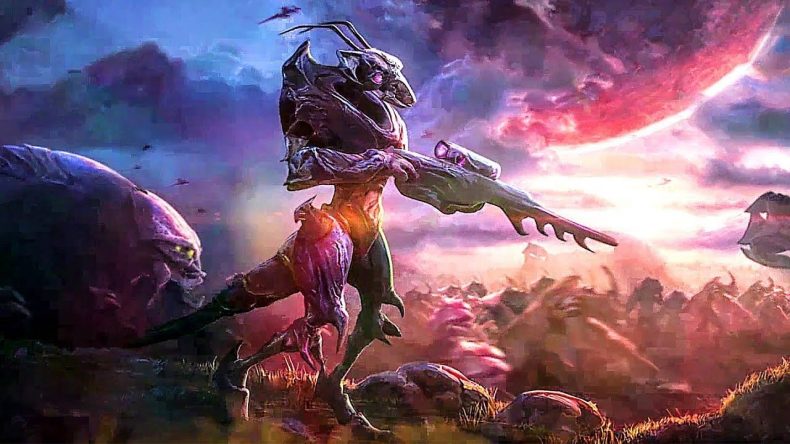 Rebuilding a galactic empire is no mean feat, especially when the empire in question is beset on all sides by invaders, separatists, enemies and opportunists. But that’s the task laid out for you in Age of Wonders: Planetfall, the Civ-Sim/Tactical Combat hybrid from Triumph Studios and Paradox Interactive. No matter which of the six highly advanced civilisations you choose to play as, the overall objective is roughly the same: reclaim your former glory, uncover the ancient treasures of the past, and dominate, subjugate or ingratiate the other factions. It’s not easy, but we’ve been playing it a lot in the lead up to release and we’ve got some Planetfall tips to help you get started. One of the best ways to bring in resources is to annex nearby sectors to bring them under your control and then exploit them for the goodies they hide. Different sectors are better at producing different resources, which include Energy, Food, Knowledge and Production. You need a steady flow of all the things in order to thrive, and taking them couldn’t be simpler.

You’ll just have to manoeuvre any unit onto a sector flag, choose “Annex”, and then move on. You don’t even need to hang around in the. Sector. It takes a turn to complete, and then from the Settlement menu you choose which resource to mine. Of course, protecting sectors is slightly tougher, especially during times of war, but it’s totally worth the trouble. Don’t forget to upgrade them as soon as possible to increase their productivity.

A small, self-contained colony might be easy to manage, but sooner or later you’ll hit the limit for citizens, and subsequently how many sectors you can annex. You can set up forward bases in other sectors which can be upgraded and guarded with armies to defend your territory, or you can construct a Colonizer and build a new colony.

Each one can be upgraded along the same or different paths depending on which “Centre” you choose, so one colony might have a “Biofarm” base and produce more food. Another focuses on knowledge and research, but just remember that the more widespread you are, the more armies you’ll need to protect your people, and everything has a cost. The R&D trees in Planetfall are huge, sprawling things, and you’ll almost certainly never achieve every upgrade even if the scenario runs to the full 150 turns. There are two paths: Military and Social, which you’ll work your way along simultaneously. Initially it’s wise to grab the first tier of each branch, but after that you’ll want to start to really consider your choices.

Military units, modifications, special operations and passive or active skills and buffs are all unlockable here, as well as improvements to food and resource production. While you can’t really forget to assign new research as you’re prompted every time one completes, you can fall into a trap of generalisation. Even in the more story-based Campaign scenarios, there are often many paths to victory, and deciding what kind of Commander you’re going to be early on will help you make informed decisions. If you intend to go the peaceful route, you’ll need units to protect you, but you may not need to go all the way along to developing the juggernaut units if you don’t intend to wipe the enemy out.

Even a “small” world in Planetfall will present you with a pretty big map. Depending on which type you chose, there are going to be lots of different terrain variations across a given area. While it’s all changeable, most default maps will have dozens of pick-ups, points of interest, landmarks and enemy strongholds to investigate.

Create a few scout units early on (some factions, such as the Amazon, have scout units that can only be created through special Operations that will travel further per turn) and go explore. Even the lowliest unit can create a forward base or annex a sector, and any unit can collect pickups and add them instantly to your stock piles. In other words, travel the world and get rid of that fog of war. During almost every campaign or scenario, you will experience war. Not just random combat on the map, but all-out war, to the death. No matter what you do, there will always be a faction that simply does not like the cut of your jib. It might be pre-determined racial tension, bad blood caused by history of shitting in each other’s’ yards, so to speak, or it might even be a victory condition (particularly in the story campaigns).

While you can’t please everybody, it’s worth creating at least one ally early on and keeping them on-side. If they’re in a non-aggression pact or a defensive pact with you, or better yet if you can persuade them to become vassals, they will enter a war with you. Dividing potential enemies is the best way to maintain an even playing field, as the AI will kick the crap out of each other off-screen and a strong ally may well take care of the enemy for you. Keeping other players happy is another story altogether.

Likewise, a strong network of allies gives you lots of opportunities. Not only do sustained eras of peace prevent civil unrest in your colonies, they also allow for trade with other players or factions. You can barter for everything from information and knowledge to resources and annexed sectors.

Be aware though: the AI is smart, and if you’re a soft-touch or a tyrant you can lose an alliance as quickly as you forged it. Try to meet demands where you can, but don’t give your allies everything and leave your own people short. Planetfall is turn-based and you can spend an hour mulling over a decision if you want to. Sometimes it pays to take a deep breath and examine your options. Say, for example, you’re on a world with more than one NPC faction (the Paragon, the Psi-Fish or the Growth). These guys will give you side quests that often reward not only favour but weapons and mods or resources. However, they’re almost always at odds with one another. If you have a strong alliance with one and you’ve built near their borders, but another starts offering you quests with better rewards, you might be tempted to switch allegiances.

Now you need to think. It’s easy to jump on the nearest offer of a brand new plasma sword, but the NPC factions tend to declare all-out war on the turn of a die. Make sure you’re prepared for the consequences of every action before you take it.

The combat is almost a straight XCOM-clone. You move your armies around a grid-based arena, attacking, guarding or using overwatch – or hitting the enemy with special skills and abilities. Aside levelling up your individual Hero units (who earn XP and unlock skill points), you can also apply modifiers dependant on your path along the research trees.

These modifiers can add health regen, alter your attacks by adding status effects, or imbue your units with various buffs like increased accuracy, better defence or greater movement. You can choose to apply mods to individual units or to every active unit of that type for a price. Once you’ve made a modified unit once you can choose to train them in the colony for a slightly increased price from then on. Special research projects also allow for advanced facilities to improve unit efficiency overall.

In addition to simply going toe-to-toe with the enemy, you can research special Operations that allow you to use powerful attacks both on the battlefield and on the map. While it’s very handy to call in an air-strike or alien disease while you’re actively fighting, it’s even sweeter to do it to an encroaching enemy force right before you attack them.

For instance if one of your sectors is invaded by an enemy that you simply cannot beat, it might be worth priming an offensive Operation and hitting them with it to weaken their power. This is a number determined by the number, level and well-being of the units in a given army. A well-placed strike can not only weaken an enemy, but apply negative status effects in the ensuing ground battle.

While the story campaigns often have several very specific victory conditions, the free play scenarios will usually allow you to succeed in other ways by either scoring the most points within 150 turns or building a devastating doomsday weapon that will annihilate the enemy in one attack.

To achieve these conditions though, you’ll need to be in it for the long haul. The longer you survive the more you’ll advance, and advancement comes at the cost of more and more resources. You’ll need to plan carefully, live frugally, avoid unnecessary conflict and possibly keep your enemies really close until the moment you ultimately betray them.

Did you enjoy our Planetfall tips? If so, read our review!

Senior Content Editor Mick has been playing games for over 30 years and writing about them for around 12. After drifting from site to site for a while, settling briefly at the now-defunct Made2Game and freelancing for the gone-but-not-forgotten NintendoGamer Magazine, he came at last to rest at Godisageek. Mick has been a reviewer, staff writer and content editor here for some time, while also moonlighting a little for Red Bull Games. He has 4 kids, has written 2 novels, and sometimes even manages to pay a bill or two. You'll usually find him defending the galaxy in Destiny 2, battling evil in Diablo 3, or lurking in the background on Twitter. Find him there @Jedi_Beats_Tank, or on XBL (JediWaster247), PSN (Jedi_Waster) or Nintendo (JediWaster).
MORE LIKE THIS
Age of Wonders: PlanetfallGuidesParadox Interactivetips