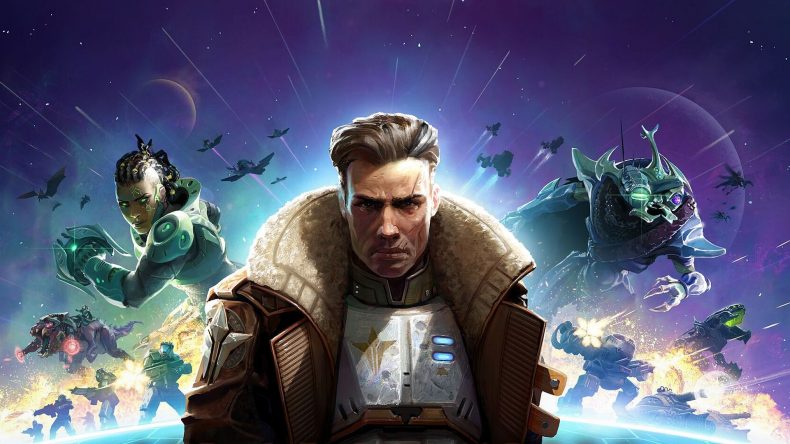 Heavy lies the head that wears the crown, or so they say, leading me to believe that “they” – whoever “they” are – have spent some time playing 4X strategy games. I’m not equating the running of a fictional civilization to being an actual monarch, but let’s be honest, it’s the same thing just at a slightly lower position on the stress slider.

I’ve been getting into strategy games quite a bit with his year, with They Are Billions a few weeks back and the incredible Stellaris earlier in the year, the latter of which was developed by strategy veterans Paradox Interactive who incidentally are handling publishing duties for Age of Wonders: Planetfall.

If you’ve played any of the Age of Wonders games – or indeed any civilisation sim like it, as they all cherry pick ideas from each other like a bunch of the monsters from Jeepers Creepers at a swap-meet – then the basic tenets here are nothing hugely mind-blowing: gather resources, expand your colony, build an army, twat your enemies, and kiss the arse of the biggest baddie on the map until they suddenly decide they’ve had enough soft wet smackers on the gluteus maximus and fancy taking the relationship to the next level by committing bloody-minded genocide on your people. But it stands out, at least for me, by being one of the most fun, satisfying and inventive turn-based strategy games in recent years. There is so much game packed into it that even after I’d cleared the 25-hour mark there was still a faction I hadn’t even played as, and dozens of units, weapons and mods that I’d never unlocked.

The story begins a few hundred years after the collapse of the Star Union, an intergalactic federation of worlds and races that controlled much of the Galaxy. As the leaders of various factions with a stake in the uncertain future, you’ll play from multiple points of view and in many different locations against many different enemies as you uncover the secrets of the past.

Each leg of the story-based campaigns can take between 3 and 5 hours, and there are several scenarios for each of the six playable factions. And if you don’t fancy playing the story you can build your own custom scenarios with up to 11 other AI or player-controlled colonies to plan, plot and scheme into the grave. Unless you’re a nice sort, in which case you can just make cuddly-wuddly love with everyone instead, although this is considerable harder and more draining on the resources.

A character creator kicks off the action, as even when playing the story you can build your commander from scratch, adjusting the aesthetics and adding accessories, capes, eye-patches and, in some cases, mandibles. The six factions are a diverse bunch with individual backstories, appearances and units. In free play you can also select a specialty for your custom commander that determines which game-ending Doomsday weapon you’re going to build towards, as well as a variety of perks and mods unlockable through research. Once you’ve made planet-fall and established your first colony, you’ll need to learn to manage it. The map is split into dozens of sectors, which can be annexed to be exploited for resources or to become forward bases on which to build extensions to your colony. If you’re playing the campaign you’ll usually be greeted by an enemy and an ally within a few turns, at which point they’ll establish the parameters for victory. It might be that you need to find a specific landmark, defeat a particular enemy or acquire certain knowledge to succeed. Sometimes you’ll just need to blow everyone else off the map.

Either way, research and development plays a major role as you work your way through two enormous R&D trees to invent new ways advance your colonies or put holes in your enemies. You spend resources as quickly as you earn them putting in place infrastructures for military might, industrial production and food storage, but you’ll also manage your colony’s overall happiness and, of course, defend your borders from both AI and player-controlled factions and a number of NPC factions. These guys have their own agendas, and will offer you side quests often in direct conflict with one another, forcing you to choose a side.

Diplomacy is fairly straightforward but still deep enough to be a viable option instead of simply nuking everybody at the earliest opportunity. You can insult and compliment other commanders, or broker trade deals, non-aggression pacts, open your borders or demand that they kneel. It’s all quite par for the course to veterans of the series and the wider genre, but Planetfall presents it all in such a way that it feels new. The variety of units is dizzying, as is the sheer amount of modification options, weaponry, and special attacks, here called Operations. These powerful skills can be used in or outside of combat depending on the type, and sometimes take several turns to “prime”. Essentially they work to damage and debuff enemy units on the map or on the battlefield. To be honest, though, the colony management is only half the game. Planetfall does away with the purely animated combat turns of its predecessors and peers, where two armies meet and slash at each other for a while until one falls over or explodes, and you watch it all unfold without a sliver of agency. Instead, combat transforms Planetfall into an incredibly competent XCOM-clone, as you move your units around a grid-based arena, using half and full-cover, overwatch, special attacks and Operations, all with a classic “chance to hit” mechanic and animations for all occasions. You can choose to let the AI fight for you if you like, which will skip the battle but still save a replay of it all if you want to watch it and glean some pointers.

It’s a good-looking game, though I’d have liked more detail both when zoomed right into the map or all the way out, but the animations are cool and the landscapes themselves are beautiful. There’s a great variety in hero types too as they’re all randomly generated in the character creator, and the different factions are all so aesthetically different, from the human Vanguard or the all-female Amazons, to the insectoid Kir’Ko, the robot-zombies of the Assembly and the Dvar, which are basically your standard fantasy dwarves but in space. Weapon and Operations effects in battle also look pretty good, and I could listen to the score on repeat for days on end. It’s just so good.

Developing for console and PC together has allowed for Triumph to make the controls incredibly intuitive even on a pad. I never found my fingers tripping over themselves, even when there was a ton of stuff to manage. After each turn you’ll be greeted with a list of problems to deal with and demands to answer, and thanks to the simple control system getting through them all in order is never a chore. The variety of things to see, treasures to find and dangers to face on the map also makes clearing the fog of war a lot of fun.

The only thing I can really find to complain about is that sometimes the infamous “chance to hit” seems skewed against you, and occasional difficulty spikes are a little frustrating though you can usually overcome them with a little forethought. On one occasion I had to throw four armies to their deaths in order to whittle a occupying force down enough that I could finish it off with my main hero, and now and then the AI will go nuts for no apparent reason and start hurling insults at you before declaring war. Depending on who your allies are in a given situation, War can sometimes be more of an inconvenience.

Sadly I was unable to test the multiplayer as the servers weren’t operational pre-release, but I can only imagine the pressures of dealing with enemies who can be as devious as you. That said, I never hankered for it once in all the time I spent building and exploring and killing aliens, and I predict many more hours before I begin to tire of it.

At the beginning of the year I fell deeply in love with Stellaris, and Paradox’s influence is felt keenly in Planetfall. The addition of the excellent combat and the inventiveness of the factions and their lore are both massively welcome, transforming what could have been just another resource-gathering civ-sim into something that feels new and fresh and compelling. Everything about Age of Wonders: Planetfall feels like it was considered thoroughly and tested to within an inch of its life, and that’s no mean feat for something as intricate and involving as this. Whether you’re a veteran of the genre or a relative newcomer, Planetfall’s excellent combat, impeccable pace and impressive variety will keep you plotting and planning your rise to glory for a long time.

Occasional difficulty spike
AI can be a little erratic

Whether you're a veteran of the genre or a relative newcomer, Planetfall will keep you plotting and planning your rise to glory for a long time.