previous
Nintendo to showcase gameplay on a number of titles
random
next
Are seasons a reason to return to PUBG?
0 comments 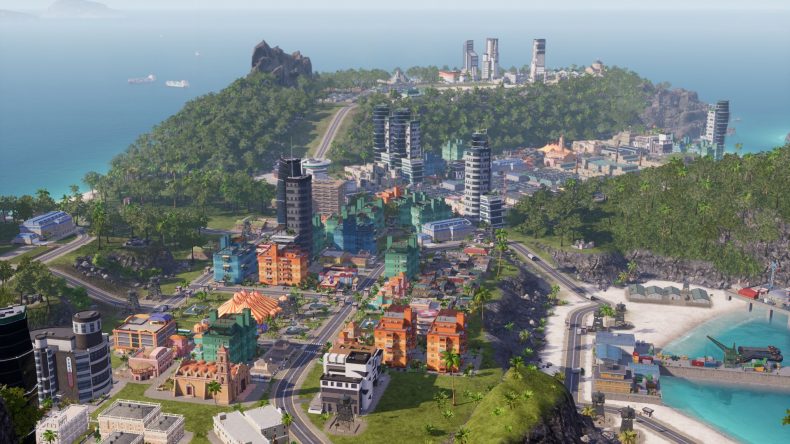 The sun was setting on another day in paradise.

The thing about paradise is that it’s all about perspective. And from where I’m sitting, with my feet up in a leather-bound chair, occasionally reaching over to procure another carefully selected cigar, paradise feels pretty good. The healthy bank balances, both official and unofficial, don’t hurt either. Life is good as El Presidente.

A gentle, almost apologetic rap at the door disturbs my peace. I bellow a command for its owner to enter, and the big, heavy white double doors of my office open to reveal my faithful Penultimo. Ah Penultimo, my trusty advisor and executor of my plans. I forget myself and allow a half-smile to cross my face as he softly paces across the room towards me. Halfway across the floor, he freezes mid-step, in a quite unnatural pose. He stays there for several seconds, all the time I’m wondering what has happened. Suddenly he lurches forward, seemingly passing through the air in an instant, and in half a moment he’s upon me at my desk. He speaks in riddles, seemingly at the end of a conversation he never started.

I struggle to make sense of what just happened, but before I can, Penultimo hands me a pile of familiar-looking papers. More decisions to make no doubt about the denizens of my banana republic, my utopia, my Tropico. The sixth time’s the charm, I tell myself. As I gaze downwards at the judgements for my people, what stares back at me is confusing. Scrawled text covers the papers, in a language I don’t understand. I glance at Penultimo, who is thankfully now moving freely, but seems unconcerned, and dutifully reads out what is written in his usual humble manner. If only I could understand what was written as he could. Confused, I slump back in my chair, only for silence to befall the office and everything turns black. “Is this death?” I ask myself, but no something else. A restart, where furious nostalgia forces me to repeat proceedings again. The sun was setting on another day in paradise…

As stories go, it’s a little forced, but it serves to remind us that even idyllic settings can be tarnished if the fundamental experience has flaws. Tropico 6 is a great game, and when it was released earlier this year on PC, I thoroughly enjoyed my time with it. Its additions felt purposeful and were well-executed. Also, some of the miss-steps of previous titles have been thankfully consigned to the history books. Simply put, it is the best Tropico in the series, and being El Presidente has never felt so good.

It comes as no surprise then that it should make the transition to consoles, as previous titles have in the series. And there’s now a Preview version available on Xbox One for you to dabble with before the console launch on September 27, 2019. But if you haven’t already guessed, this version should be approached with a large dose of caution and awareness of what awaits you. Be prepared for jumpy lag at times, the occasional message or task is written in illegible, mutilated text, or worse, a crash of the game causing a reset to your game or console. But this is a preview build after all, and you can expect the game 2 months ahead of its official launch to be rough around the edges. And thankfully when you get past these rare blips and frustrations you begin to experience the wonder of the game I enjoyed so much back in March. The camera works really well on console, sometimes feeling even more fluid than on PC which is a refreshing change, and you always feel like you’re fully in control. The pivoting, zooming and scrolling across your utopia feels smooth, and switching between regular view and Archipelago view (zoomed out to view all islands) works fairly seamlessly.

The ring system from the PC version is back and used by El Presidente to choose the remarkable number of options at your disposal, and despite numerous clicks being required to select each option from the many available, the selections work well on a controller, never feeling fiddly. And thankfully the screeching noise when placing plantations that existed in the review build of the PC version is an irritating distant memory. You can now plant crops without fear of a burst eardrum.

I did find that sometimes when you have lots of buildings huddled together, selecting the right one can be a bit hit and miss. This is despite the fact your cursor is clearly over the intended building. It was a rare occurrence with the pin-point accuracy of a mouse on PC, but I found it a more frequent problem on console. Thankfully a quick zoom in – again, a quick and smooth process – eliminates any doubt of your intended selection and things can proceed as planned. There are also a few icons on the screen that appear with messages which can now not be clicked as they could before, instead they are consigned to button presses, which feels slightly less intuitive until you figure out where each menu is mapped to. But for the most part, this is still an exciting, funny, and downright wicked game, as you would expect from the Tropico series. Fans of the series who’ve yet to play it on PC will be able to get a fair taste of what’s on offer here. They can playtest the new content and decide for themselves whether the additions to previous titles are for them. If you can forgive the technical niggles of the preview version – and you should – then what’s left is a pretty decent experience. The visuals hold up well, and the musical is still a glorious mix of calypso and Caribbean vibes, perfect for whiling away the sunny days as a ruthless dictator.

Like most then, this preview comes with some caveats. The technical hindrances are noticeable and can be frequent. Although thankfully crashes have only happened to me a couple of times whilst playing, and the autosave feature meant I never really lost anything. The lag does annoy, but never completely detracts from the enjoyment. Sometimes you’ll be knee-deep in riots or money-laundering you won’t notice it as much. It does need fixing for the console launch properly, but even with it, you can still experience the splendour of Tropico 6 and its sheer scale and depth. And what’s more, with the setting and humour that comes as part of the package, you’ll be donning an evil grin as you do so too.