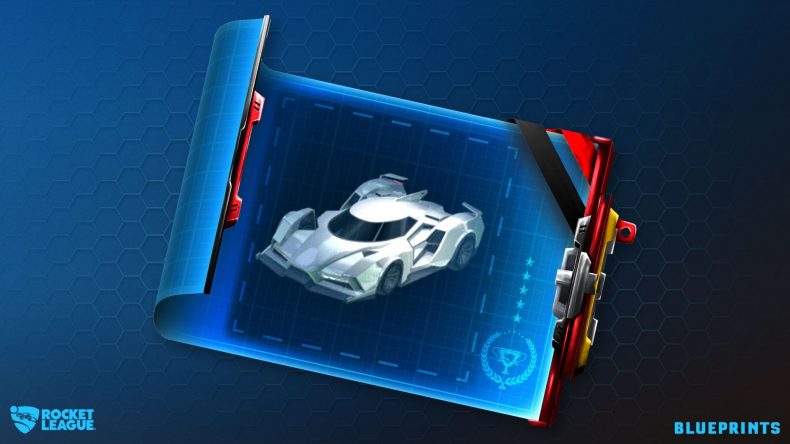 Psyonix announced back in August that paid, randomised crates would be a thing of the past in Rocket League. Now, they have annouced what will be replacing those crates: Blueprints.

In December, an update will be released introducing the new system. After each match you’ll get a chance to get a blueprint. Once you’ve received a blueprint it will show you what item can be created, for a set price. You can choose to pay for the item there and then or save it for later.

Each blueprint can drop with special attributes like Painted, Certified and Special Editions.

Blueprints aren’t the only new addition coming to Rocket League. A new rotating Item Shop will also appear in December. The new Item Shop will offer new items, legacy Crate content you might have missed and the debut of the Titanium White Dominus. However, any items purchased through the item shop will be attached to your account and can’t be traded.

Items from blueprints and Item Shop items can be bought with Credits, the new currency replacing Keys. Credits can also be used to upgrade to Rocket Pass Premium. Esports Tokens will be separate from Credits and will be the only way to buy things from the Esports Shop.

Once the update is live any Keys you have will be converted to Credits when you log in. Each crate will also be converted into Blueprints of the same series.

There is one more crate to come to Rocket League before the changes go live. The Vindicaor Crate is available and will feature the new Sentinel Battle-Car and the Neuro-Agitator Goal Explosion.

And finally, there are changes afoot for the Trade-In system. Once Blueprints go live this will also disable the ability to use paid content in the current Trade-In system.

This means that any items you have through Blueprints, the Item Shop, or content previously acquired through Crates can’t be traded. An updated inventory management feature will let you archive any items that don’t want to appear in your active list of customisation items.

This does not affect trading any free post-game drops.