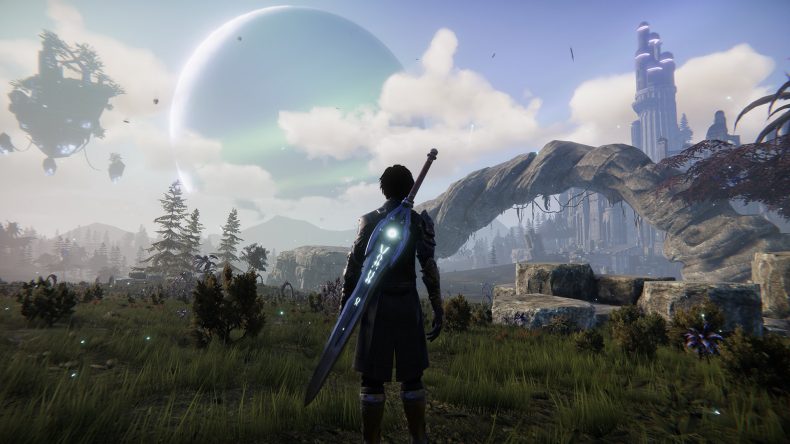 Midgar Studio is a tiny outfit of fewer than a dozen people who have nonetheless stepped into the somewhat grand arena of the JRPG. Their game, Edge of Eternity, has been in early access for a while, beginning life as just a single chapter before growing to its current size – and it’s still not finished. A turn-based affair similar to The Last Remnant but with a decidedly Final Fantasy-esque aesthetic, it does an awful lot right despite a few pressing issues.

It’s set in a fantasy world in the thrall of a disease called the Corruption, which turns normal people into monsters and for which there is currently no cure. Young military recruit Daryon is thrust into the path of destiny when he receives a desperate missive from his sister right as the Corruption hits his barracks. With a war and a disease at his back, Daryon and his companions must cross a ravaged continent to save his family and, perhaps, the world. As a plot it’s decent enough, a worthy reason to catapult the action from A to Z, but the writing is a little hit and miss. Edge of Eternity attempts to do what so many JRPGs do, and mix humour in with all the emo stuff, and it doesn’t work all that well here. The light-hearted tone of the prologue, for example, is scuppered almost immediately when characters you’d assume were being set up to be around a while get immediately removed from the story. The premise is solid, and how the story unfolds is fine, but the dialogue (perhaps owing to localisation) isn’t great.

What is great is the combat. Turn-based at its heart, an Active Time Battle (ATB) system works to keep you moving and thinking during fights. Spells take time to cast, actions take time to perform, and you can activate counters and parries during an enemy’s attack. A character has what amounts to a stagger meter that can be depleted to leave them vulnerable or to interrupt an incoming attack. It doesn’t flow as smoothly as it could, and the animations can be a little stop-starty, but it’s pretty easy to get the hang of and feels different enough to impress. A hexagonal grid system aids with positioning during fights, too, showing you where an enemy is going to launch its most devastating attacks and giving you an opportunity to move. You can’t always avoid them, and sometimes you’ll put yourself in harm’s way for the next attack, but it’s an interesting system.

Aesthetically, Edge of Eternity has a very strong Final Fantasy vibe. It’s arguably fairly generic, if I’m brutally honest, but that doesn’t mean it’s not incredibly pretty at times, too. Close up, the environments are detailed enough, while some of the backdrops are gorgeous. That said, the character animation isn’t always on point, which may improve with time. Quite surprisingly for the genre, Midgar Studio have made Edge of Eternity moddable. This is potentially quite an exciting decision, because it’s rare we get to see a mod community go to town on a JRPG of this type and scale.

Besides the combat, the biggest feather in Edge of Eternity’s cap is the music, which was composed by Chrono Trigger’s Yasunori Mitsuda. When you’re out in the open parts of the world (and there are some sections in the meadows that reminded me of Xenoblade Chronicles 2), and the music swells, it can be almost breath-taking.

Midgar Studio have done an incredible job up to now. While it’s still in early access and there’s still time to change things, the potential is massive. There are bugs to chase out of it, for sure, but JRPG fans looking for their next fix before FFVII Remake lands would do well to give Edge of Eternity a chance.