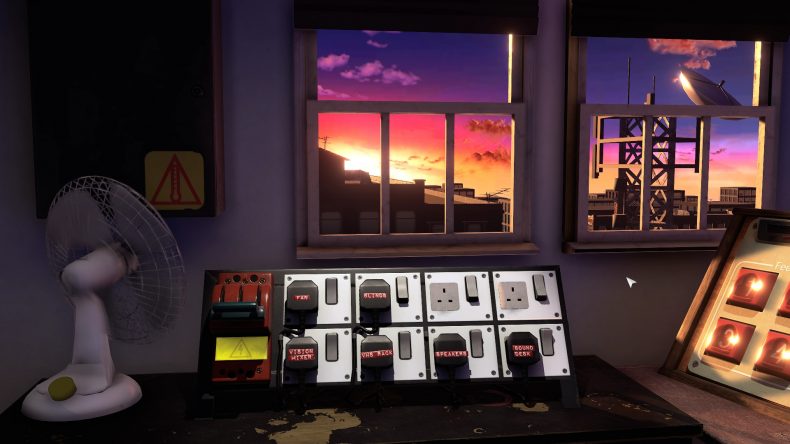 Not For Broadcast is a weird game and I can honestly, with my hand on my heart, say I have never played anything like it. The closest I have ever come was playing the original Night Trap on Mega-CD in the early-90s. It’s not that the gameplay is overly similar, but switching cameras to watch live actors doing things took me back some.

The premise behind NotGames’, err… game, is that you are a broadcast operator at a busy news studio in the 80’s, in a time immediately following the election of the far-left political party, Advance. While it’s not set in a post-Brexit world, it easily could have been, with Advance introducing the kind of policies and ideas that would make most normal people at best roll their eyes and at worst, riot. It’s all very suggestive, to the point that I started anthropomorphising Not For Broadcast as a swaggering uni student who thinks he’s incredibly clever but who wouldn’t know subtlety if he woke up and found it had just won a referendum. That said, elements of it are quite clever, and some of it is even fun. It swings pendulously between on-the-nose social commentary and out-and-out ridiculousness.

It begins with your arrival at the studio right as a news broadcast is starting. Your cockney mate rings you in the booth to talk you through it all before jumping ship and emigrating out of a country that is, according to most, well and truly fucked – and it’s not hard to see why. One of your earliest tasks is to edit the interview with the winning candidate who’s drunk off his tits and swearing and slurring into the camera. It would be amusing, if it weren’t A) worryingly close to home, and B) bloody hard to do.

A bank of switches, knobs, levers and screens sits before you, and with this elaborate control station your task is to make sure the viewing audience are kept happy. From jumping to commercial on time to adjusting instruments to avoid bursts of static interference, the minutiae threatens to overwhelm for the first few hours. The grander picture involves the broadcast itself, which might be a teeth-achingly bad play by an amateur school group, an interview with an abrasive film director, or a preacher caught in a compromising position. There’s an almost Monty Python-esque atmosphere to Not For Broadcast, as you attempt to edit out swears, and switch cameras to stay on the speaker or cut away from long, boring shots, and in the background your subjects are essentially being horrid human beings. It would be relentlessly grim if not for the slapstick. In between broadcasts you can listen into the news team slagging each other off or the guests acting like entitled divas, and it’s hard not to be reminded of 90s masterpiece Drop the Dead Donkey at times.

At the end of each day you get to go home, which is sadly when Not For Broadcast becomes a bit forgettable. There are scenes of family drama between your character and various family members that further highlight how shit the Advance Party is and how much people fear what they’ll do to Britain, but it all feels a bit like filler content and doesn’t tie in to the work stuff.

The writing is pretty decent throughout, designed to show the characters up as characateurs of themselves in a manner that works well and really makes you hate the ones you’re meant to hate, though you’ll never really sympathise that much with anyone but your protagonist, because his pain and confusion is your pain and confusion. There are some highly amusing performances even if some of the jokes are a bit predictable, or else land wide of the mark. When Not For Broadcast gets it right, though, it’s bang on the money. Ultimately, this is a very unique game. More and more we’re seeing small studios use live actors in their games (there have been a few recently, like Tell Me Lies starring Logan Marshal Green), but not like this. Mixing humour, satire, almost scathing commentary and some genuinely hard gameplay into one experience, NotGames have created something that you genuinely will not have seen before elsewhere.

If nothing else, it’s worth a punt for that alone.

Features, Previews
Not For BroadcastNotGamestinybuild