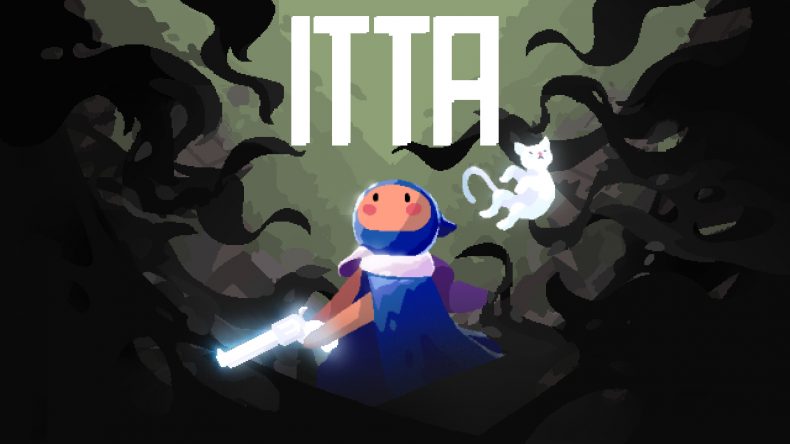 You never expect a game to open with a dead family. I mean, it’s a pretty grim way to start any story. Yet ITTA, the twin-stick shooter from Glass Revolver, does just that. Itta wakes up beside the bloody remains of her father, brother and even her cat, with no knowledge of what happened. Soon enough, a strange spirit appears, taking the form of the family cat in perhaps the most inappropriate way. Not much is explained, only that Itta should find her mother. Naturally, her father’s revolver is needed, so the cat spirit conjures up a magical version of it.

Upon leaving the cave of death, the hauntingly beautiful world of ITTA opens up before you. With its pixel art style, there’s a mix of Shadow of the Colossus and Titan Souls to its ethereal palette, as you look upon white stone and faded greenery. There is life, with frogs leaping around the puddles and even spirit creatures running around, though you’ll probably want to shoot the latter, as harsh as it sounds, as they’ll drop temporary health boosts. Health boosts were absolutely a necessity during my time with ITTA’s demo. It’s no accident that I mentioned Titan Souls, because ITTA appears to share the same challenge, as well as its palette. Upon entering the first door, I was greeted by a giant golem which was clearly unhappy with my presence as it proceeded in its attempts to murder me. Unlike Titan Souls however, you don’t die in one hit, which is just as well because this game would be impossible. Itta is a bullet hell, which requires intense concentration and liberal use of the dodge button.

You’re not given much in the way of tutorials, instead the game opts to let you learn by doing. This also includes dying. Make no mistake, you will die. Even in the two boss battles contained in the demo, I died at least half a dozen times, minimum. If these are the first two encounters in the main game, expect ITTA to be a rather difficult game to finish.

The second boss, a giant, floating skull that spits out energy skulls, that also explode into energy bullets, was quite brutal. As if that wasn’t hard enough, as the fight draws on the skull even sends little exploding spiders your way, distracting your already monumental task of dodging death from all angles. Thankfully, the controls and movement are as responsive as you would hope for, in a game like this. In many ways, it reminded me of Enter the Gungeon’s boss battles, as ITTA feels just as smooth in its movement and general combat. It’s more easy than you might expect to thread the needle between projectiles, with each one casting a shadow on the ground to let you know where it is in relation to everything else, always handy to have the depth represented in a game viewed from a top-down perspective. Plus, it’s always nice to know that your dodge roll has invincibility frames, allowing you to avoid almost certain death with the correct timing.

It’s testament to how well designed it is, and how fluid the movement and shooting are, that ITTA’s gameplay was so easy to grasp. It was somehow accessible, despite its insistence on murdering me to death with red and white energy skulls. It also showed me a glimpse of a story that intrigued me, as Itta herself could not die, yet her family certainly did. Or perhaps they didn’t, merely being brought back to life elsewhere in the unknown place in which Itta found herself lost. I wanted to find Itta’s mother, and to find the mysterious old man that seemed to know what was happening but wouldn’t tell.

The answers will just have to wait until ITTA releases on April 22nd. Assuming the difficulty doesn’t defeat me first, of course.

Interview with David Bateson, voice of Hitman’s Agent 47
Support us