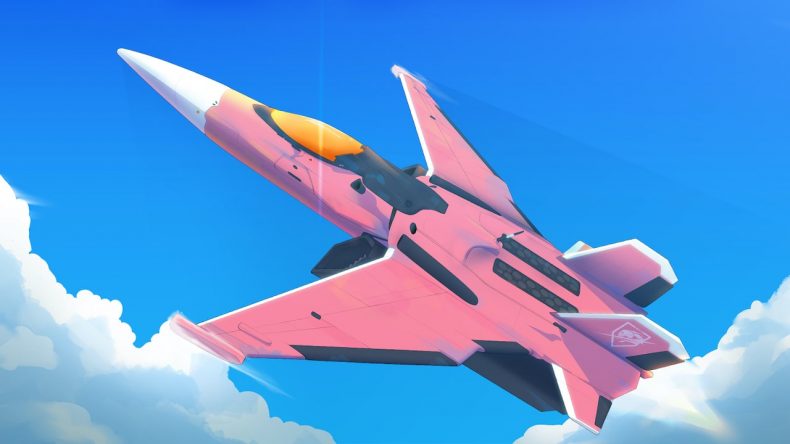 After negotiating a quick setup, the excellently-named Jet Lancer throws you straight into the mix as a mercenary ace pilot for hire, carrying out a series of progressively more complex and difficult missions in your charming pixel-art crimson fighter, which in the breezy anime-lite plot appears to be capable of sentient thought. In keeping with the anime aesthetic, the way your fighter has its wings swept forward reminded me of the YF-19 from Macross. Yeah, I am getting that nerdy on you. The little jet can move across the 2D stages in 360 degrees of motion, giving the controls and momentum based physics the same feel as legendary arcade classic Time Pilot. The controls, it has to be said, are excellent and wonderfully intuitive. A few tutorial missions in and you will be swooping through the skies, unleashing satisfying salvos of lock-on missiles, employing the superb evasive roll manoeuvre to blaze your path through the increasingly more hectic swathes of enemy projectiles. Your sky pirate foes come in the form of both air and ground based units, and all are beautifully designed and realised.

The way the playing field fills with arcing missiles and their jet-streams, bullets, stunning explosions and a multitude of busy, smoothly animated pixel aircraft evoked memories of Treasure’s sublime Bangai-O. And the Japanese influences are worn proudly on the sleeve – from the visual style of the backdrops, the talking cat that doubles as your mechanic and advisor, and the astronomical boss battles. Those expecting generic aircraft-based bosses can throw those preconceptions out of the window, as protagonist Ash finds herself battling against some of the most impressive, imaginative mechanical beasts you will see this side of a – you guessed it – Treasure game. Each boss encounter requires a whole new set of tactics and approach to beat. One minute you are dealing with a creepy mechanical spider, the next facing down jet-craft with the same abilities and speed that you have. Man, I love a good evil doppleganger boss fight. It’s been too long. Jet Lancer isn’t an easy game to master. You will end up being blasted out of the sky on the reg, but it is never an unfair game. Progression gives you different weapons and abilities to equip, and you can revisit all of the stages you have cleared in order to achieve the highest “Ace” ranking. The game opens up the more you play it; eventually becoming at one with your fighter, employing the roll ability to lend a temporary burst of invulnerability, burning your way around your central axis, picking off baddies in a hail of ordnance, fire raining down against an arresting azure blue vista, as the wonderfully frenetic rock soundtrack swirls in the background. The missions are short, sharp and immensely fun, with only a modicum of repetition and that all-important replay value.

There are very few games available that play quite like Jet Lancer. The nearest modern equivalent would be the worryingly Nazi-flavoured monochrome Luftrausers. This means a fresh feeling experience. Oozing retro arcade cool, yet still feeling modern and unique, Armor Games Studios have absolutely delivered here. There is, for my money, a lot more they could do with the mechanics and tight controls they have employed here. I look forward to seeing what direction they travel in next, and would welcome the opportunity of a second sortie in the lil red plane. Recommended.

Quite short
Some repetition creeps in