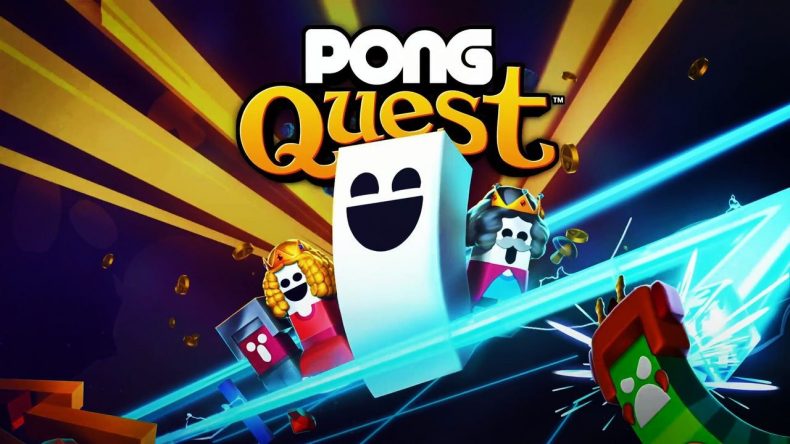 Back in 1995, a magazine editor published a bit of gossip which claimed to have the “inside track” on plans by Atari to resurrect their dormant bat and ball IP Pong for the Jaguar. Eschewing the source material, this was to be a fantastical 3D platformer with a mental alien invasion plot and an eponymous main mascot character, a humanoid with the rubber properties of a bouncy ball. Although there were a clutch of even crazier shit-canned Jag games like a beat ‘em up starring AC/DC and a survival horror based on Dante’s Inferno, Pong 2000 was, with hindsight, probably a wind-up fed by an industry prankster. When my own editor asked me to take a look at an RPG based upon the seminal, yet simplistic classic, I had to check the date wasn’t April 1st.

Calling this an RPG is perhaps a bit of a stretch. There is a loose dungeon crawling structure, levelling up, items to be found, and an amusing plot which squeezes every last drop of humour out of the anthropomorphic Pong bat aesthetic. The role-playing is inessential and serves only to set up the battles, which are the best part of the game. Encountering enemies sends you into an encounter, where you are victorious by dispatching the ball beyond your opponent in classic Pong fashion. The twist is that you have item slots (which can be increased as you level up) to hold dungeon-plundered or in-game-shop bought balls with a variety of game-changing properties. There are absolutely tons of different balls to play with, imbued with real imagination and humour. You can select them on the fly using the shoulder buttons, which gives the matches a sense of manic urgency. In terms of adding power-ups to a basic original arcade concept, the level of ingenuity and implementation here is right up there with the likes of the excellent Space Invaders Extreme titles. There are lovely nods to other Atari games, too, in the stages and battlegrounds, and even the power-ups. In theory, these battles should be a terrific source of entertainment, with a sensible learning curve and drip feed of new abilities.

Sadly, the fun Pong-offs are let down by a daft HP system which sees your health bar take a knock every time your bat hits ball. Once it is diminished, the next ball loss is a total KO. This was probably engineered to add a sense of tension, like chipping away at a guarding opponent in a fighter, and to keep the battles at a reasonable, manageable length. The trouble is, when your foes start using power ups that inflict even larger amounts of damage, it feels a bit unbalanced and unfair. It is also oddly, disproportionately difficult to replenish your health between battles due to stingy Potion Ball drops. Why would you want to fight at all? You find yourself wanting to avoid battles entirely, or doing the bare minimum to get through the next deathly dull dungeon to one of the genuinely inspired boss encounters, which I won’t spoil for you here. The best fun I have had with Pong Quest, apart from the genuinely crease-inducing way you can anthropomorphise your bat, a is to enjoy it as an offline affair, engaging in battles with human opponents. My son is not in double figures yet and has never actually played Pong, and it held him captive for a little while, until he realised I wasn’t going to allow him any quarter whatsoever. I even showed it to my old man, who is in his mid-sixties and can remember the original arcade machine. For me, it has a bit of a Windjammers vibe, and that ain’t a bad thing at all. But Christ, it’s still Pong, a game that is nearly fifty years old, and one which lacks the beguiling, addictive sorcery of other ancient games like Tetris – still so vital and essential in its modern incarnation.

Pong Quest has a flimsy, yet eminently likeable story. I found myself repeatedly chuckling at the Spooky Door, the crazy but simplistic bat-people. It has real heart and soul, it just hasn’t been properly thought through, and that’s a shame, as it’s always nice to see Atari there or thereabouts, innit? We’ve seen familiar arcade gameplay mechanics married to an RPG to better effect before – see Puzzle Quest, or the slept on Wizorb, which framed a bit of Pong-DNA-descendant Arkanoid with some top-down Zelda tropes. Maybe they are worth having a look at first, before you drop the thick end of fifteen nicker for something that probably should have been a mobile game at a more economical pricepoint.

Pong Quest has real heart and soul, it just hasn’t been properly thought through, and that’s a shame, as the flimsy story is genuinely likeable