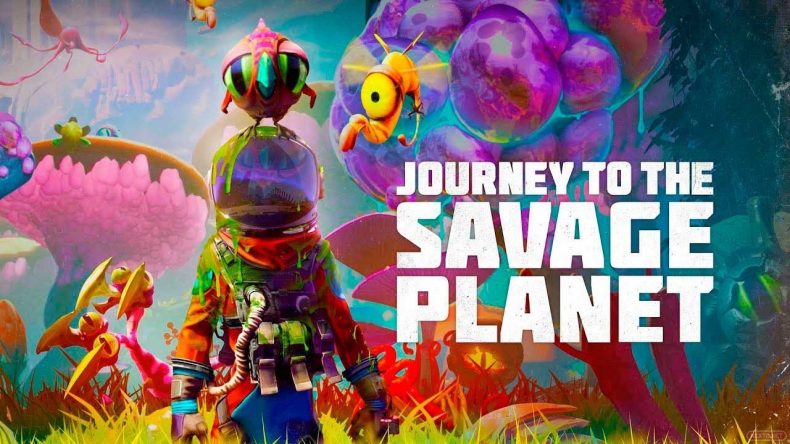 If anything, being the “4th Best Insterstellar Exploration Company” has taught Kindred Aerospace to strive for somewhere near mostly functional in everything they do, hence why your greenhorn explorer finds him or herself on planet ARY-26, a formation of exploded rock and gas that, up until now, was believed to be home to no intelligent life. Of course, the towering statue bejewelled with glowing green eyes and bizarre alien technology puts a pretty major crimp on that theory.

But, being the intrepid adventurer you are, it’s your job to explore, discover and catalogue every life form, mineral and structure on the planet. Accompanied by the sarcastic, clinically detached AI, EKO, your mission is simple: find out everything you can about ARY-26, and don’t damage company property. Taking the form of a first person adventure, Journey to the Savage Planet sees you stranded on the beautiful but deadly alien world with nothing but your space suit and your pistol. The Nomad is a diverse little device that can chip materials from rocks a la No Man’s Sky, or blast toothy space critters into gooey mush. Everything you kill or destroy will yield resources used to upgrade your gear, granting you a jump pack, grappling hook, improved backpack and better overall survivability. To this end you’re equipped with an environment scanner that allows you to catalogue everything in your Kindex, a reference database that links info back to your employers.

ARY-26 swings between psychadelic wonderland, snowy tundra peppered with odd-coloured alien flora, and dank caves where you’ll need to pluck a special bioluminescent root to light your way. Not everything is immediately lethal to you, and indeed some of the indigenous life is incredibly cute and, frankly, terrified of you, but there’s plenty on the savage planet that’s, well, savage. You can upgrade your pistol with the right resources and blueprints, but staying alive isn’t always easy. That said, you can always team up with your buddies to tackle the wilds together, a choice that doesn’t change the game at a fundamental level, but which makes some of the weirder discoveries just that little bit more entertaining. Also, you can kick a pufferbird at your partner, so there’s that. The Nintendo Switch version does a decent job here, albeit with a pretty noticeable visual downgrade. When I reviewed Savage Planet on PC in January, I was impressed by the colour and detail in the environments, and the slick animations and steady framerate made the world seem vital and alive. It kind of still does on Switch, but the textures are a little hazy round the edges and the framerate hovers at the threshold of 30fps like a nervous prom date. As a result, distant lifeforms are barely recognisable and don’t walk so much as blip across the landscape, while some of the denser areas are tricky to navigate because it’s not always clear when you’re moving at speed what’s a wall and what’s a drop.

I have seen much, much worse from Switch ports, though, and Savage Planet remains enjoyable and, crucially, playable, despite the concessions. You’ll still have fun solving environmental puzzles, determining what intends to eat you and what you can harness in your favour, and there’s still a decent sized, pretty alien world to get lost in. There are no Switch-specific functions, but by now we’re used to seeing Switch ports without them.

Ultimately Journey to the Savage Planet is a bit of a modern classic and so giving Switch monogamists a chance to play it too is something to be celebrated. It’s not the best version and certainly not the best looking, but it’s an adequate port of a brilliant game and that’s enough for me.

Wonderful sense of humour
Exploring the world is always entertaining

Journey to the Savage Planet is a bit of a modern classic, and so giving Switch monogamists a chance to play it too is something to be celebrated.